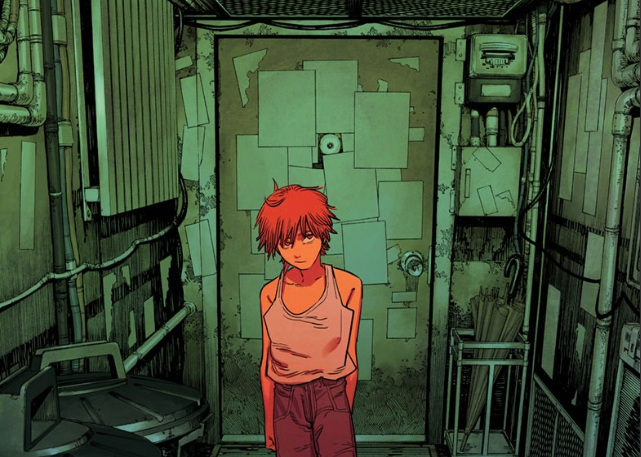 Hello there and welcome to Your Manga Week. Finding time to keep up with all the manga that releases on a weekly basis can be difficult, so I’m here to tell you what’s worth your time and what’s not. We’ll also be discussing the story and arc developments as they come. This week, we’re chatting Chainsaw Man chapter 53, My Hero Academia chapter 256, and Agravity Boys chapter 4.

Happy New Year! I hope that you’ve had a good break over the holiday period and took some time to reflect on the year (and decade) past. Don’t forget to check out our staff picks for 2019 – there’s plenty of interesting stuff in there to check out. Although I am cynical in many aspects, I do firmly believe that we can take this opportunity to put our best foot forward. Unfortunately, however, in terms of scheduling, it looks like this column will end up continuing its staggered release, as Weekly Shonen Jump and many other weekly magazines are taking another break next week. I’ll be taking another break in kind, meaning that the next edition of this column will be coming on the week of January 20. In the meantime, though, there’s plenty of manga to tide us over, so let’s get right into it.

Continuing on the theme of ‘new year, new beginnings,’ Chainsaw Man chapter 53 is jumping right into a new arc, not two weeks after the last ‘Bomb Devil’ arc came to an emotional end. What this means is that the majority of this chapter is dedicated to setting up the key elements of this new arc: Denji, now infamous as a result of the destruction he and Reze wreaked, is being pursued by assassins from all over the world and the Public Safety Division, seeing him as more of a liability than an asset as a result of this, has decided to leave him out in the cold. 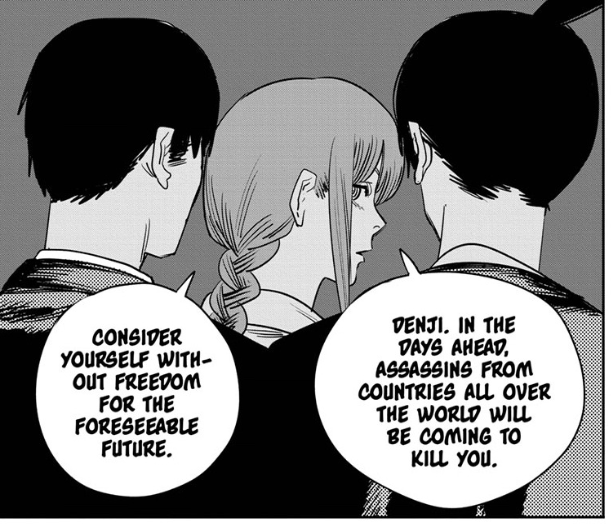 As much as this betrayal might string, Denji won’t exactly have much time to wallow in his sadness, as some formidable foes are on their way to take him out: in particular, three immortal brothers who are heading to Japan from New York to take the Chainsaw Devil’s head. 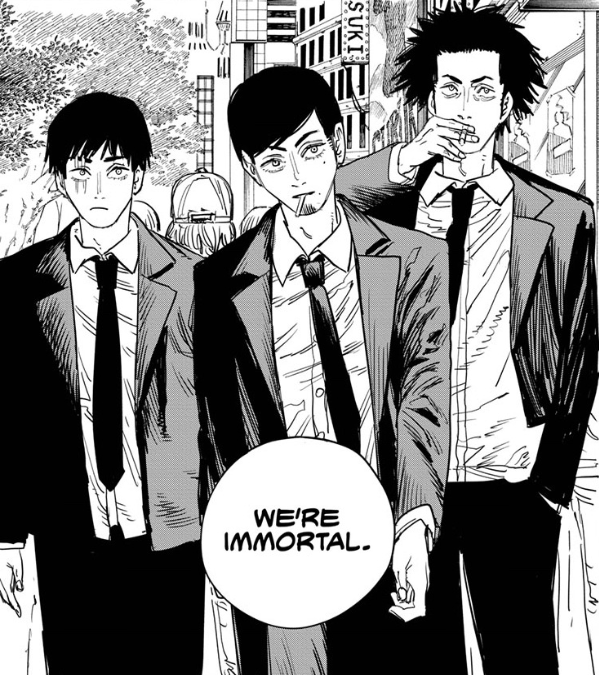 It’ll be interesting to see where this new arc goes, and just what kind of abilities these new antagonists might have. I am, however, holding out hope that Tatsuki Fujimoto might take a different approach from the majority of other battle manga this time around and make these enemies into much more than simple cannon fodder. What set the last arc apart, after all, was the strong emotional connection felt between Denji and Reze, their feelings for each other always remaining somewhat unclear.

Beyond the new antagonists, another key part of Chainsaw Man chapter 53 has me very excited for the future. In a conversation with the Angel Devil, Aki has a shocking revelation – that the Chainsaw Devil may, in fact, be the Devil – Lucifer, Lucy, the Big L, etc. 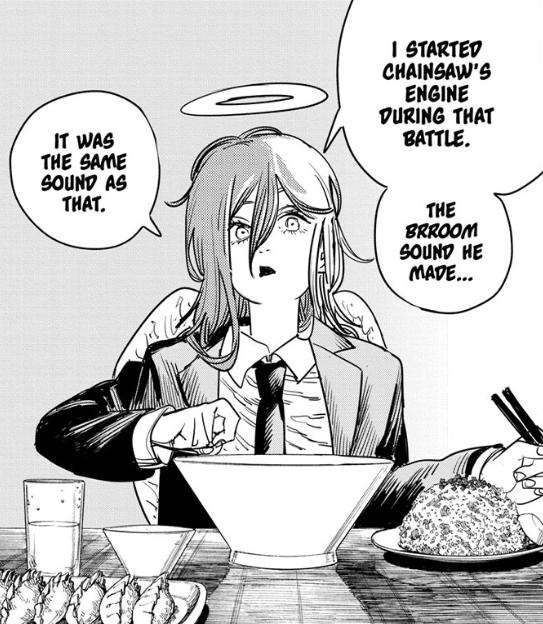 This revelation comes alongside some other interesting exposition from the Angel Devil on the nature of Devils, essentially that they flit between Earth and Hell in an endless cycle of pain, violence, and reincarnation. And, apparently, the final thing that all of the Devils currently working in the Public Safety Division heard before reincarnating on Earth was the sound of Denji’s chainsaws – signaling that Pochita, who merged with Denji to become Chainsaw Man all the way back in chapter 1, may be more important than he may have first seemed.

Tying into this also seems to be the short flashback and color page at the beginning of Chainsaw Man chapter 53, which sees Denji standing in front of a mysterious door. What might be inside? I suppose we’ll just have to wait and find out.

Chainsaw Man, Ch. 53: Chainsaw Man makes a splash in the news, and now Denji has the attention of assassins from all over the world! Read it FREE from the official source! https://t.co/xeBf89i63y pic.twitter.com/1CQTTeduxD

On a final note, we should take this moment to, once again, appreciate the incredible work of Tatsuki Fujimoto as an author and a writer on this series, as well as in this particular chapter. Not only is his character dialogue absolutely on point – both funny and humorous and sharp and concise – but the subtle quirks of his artistic direction are a wonder to behold. No other artist in Weekly Shonen Jump right now is doing anything quite as interesting as focusing on the subtle movements of Aki’s eyes, or the act of one of the immortal brothers shaking their heads. We truly are lucky to have him on board.

In terms of the New Year, if Chainsaw Man chapter 53 is focused on how to put its best foot forward, then My Hero Academia chapter 256 is using this occasion to reunite us with some old friends.

After many chapters spent away from the full cohort of Class 1-A, first at Endeavor’s hero agency and then with Eraser Head and Present Mic, some of our favorite characters finally get a moment to themselves. These moments include smaller ones, such as a fist bump between Deku and Ochaco that has captured all of our hearts and a callback to Ashido and Kirishima’s shared past, to (quite literally) bigger ones that take up more page real estate, with Aoyama and Hagakure showing off their newfound teamwork and Ocacho her new rope-firing gadget. 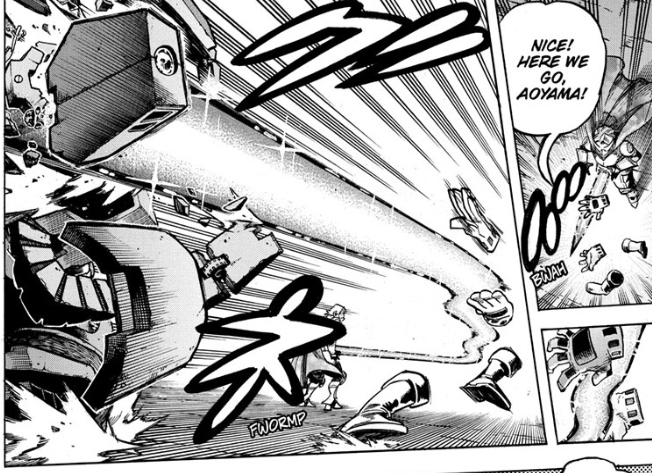 But by far the biggest moment goes to Deku, who is showing off his newfound mastery of Blackwhip, one of the many abilities that lies within One for All, that came about as a result of his time with Endeavor. 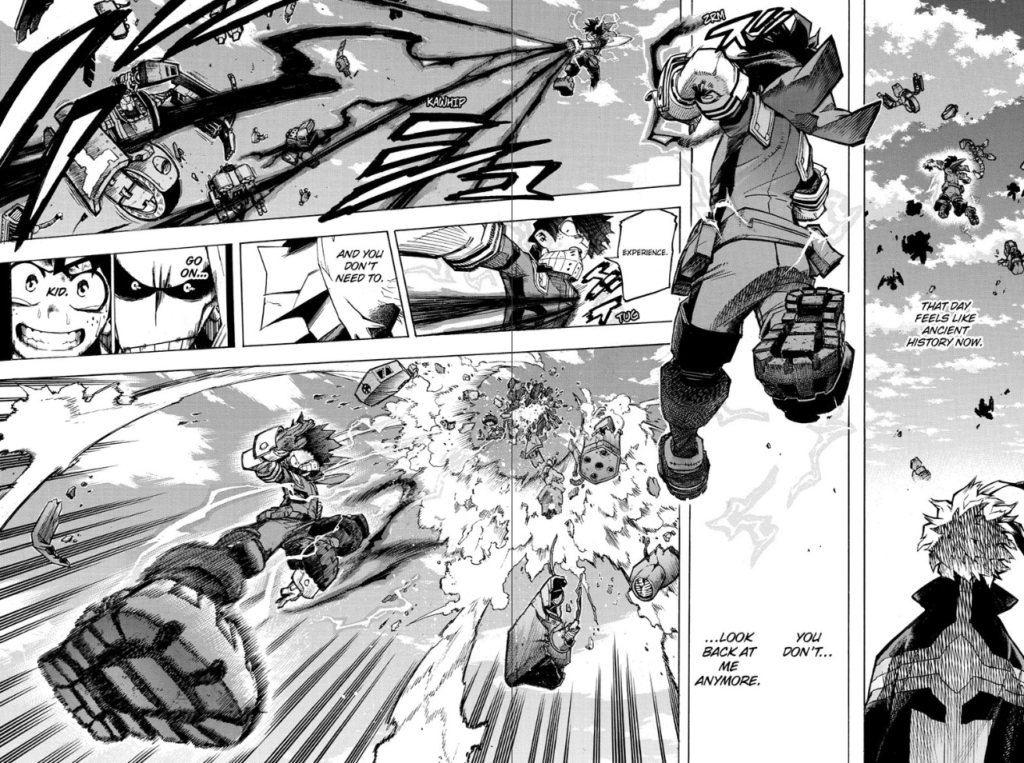 In this sense, My Hero Academia chapter 256 isn’t just doling out fan service, but also taking the opportunity to show off to the reader just how far Deku has come over the course of the series so far. All Might’s reaction is enough to signal this.

But this moment also has a more long-term aim. When taken together with the climax of the chapter, where Eri’s horn suddenly begins to mysteriously glow and All Might hands over a notebook filled with data on the previous holders of All for One, it’s quite clear that Horikoshi is setting up some kind of new conflict between a newly levelled up Deku and the similarly advancing Shigaraki. 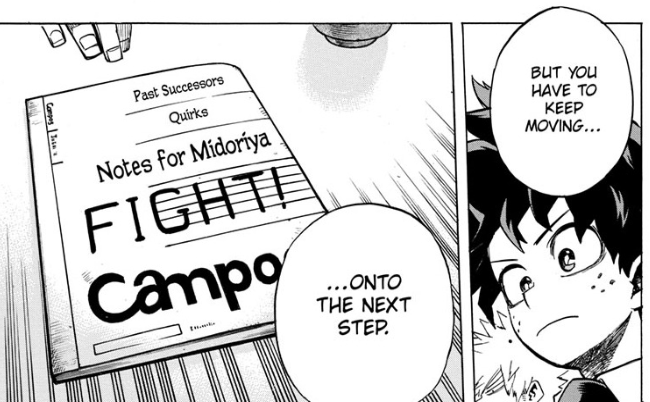 Furthermore, the amount of feel-good contained within My Hero Academia chapter 256 should be enough to trigger some flags in most readers’ brains. With all of Class 1-A so happy and confident together, I can’t help but feel like something is about to go very wrong very soon. As a wise man once said, I’ve got a bad feeling about this…

While my enjoyment of Chainsaw Man chapter 53 and My Hero Academia chapter 256 might come as no surprise given my predisposition towards both series, it may shock you to learn that I found at least some enjoyment in Agravity Boys chapter 4.

Atsushi Nakamura’s new series baffled me upon its debut in December, and ever since then, it has continued on its strange downward spiral. In the first chapter, this was due to the series’ strange fixation on one of its cast members who happened to ‘look like a girl.’ But, more generally, this has been because of its general lack of direction and focus that makes everything seem entirely inconsequential – and that’s not exactly a good look.

Agravity Boys chapter 4 doesn’t exactly buck this trend, but it at least manages to be one of Nakamura’s better efforts. Our four main characters discover a body of water and decide to take a bath, but their strange sexual fixation on Chris (the one that looks like a girl) comes back into play as they realize that seeing his naked body might turn them on. As a result, this chapter is mainly about trying to prevent Chris from taking his shirt off. 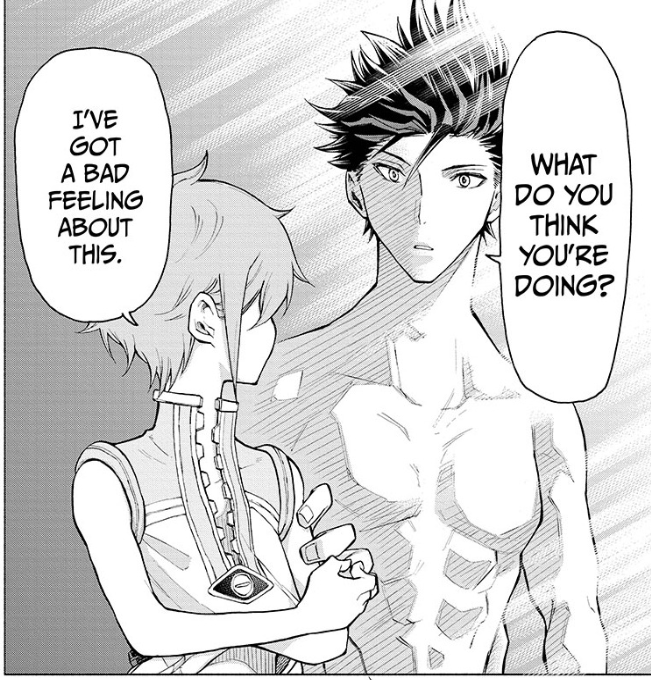 On a conceptual level, the problems with such a hairbrained plot are evident. The stakes are so ridiculous that they hardly even seem believable, and it continues to make me uncomfortable with its overtly sexual tone. Even so, it may surprise you to hear that I actually laughed while reading this chapter.

Most of this came from the characters’ humorous reactions and over-the-top facial expressions, but there’s also the genius-level meta censoring that came towards the end of Agravity Boys chapter 4, which covers up Chris’ nipples at the point where he finally has finally had enough and takes his shirt off. 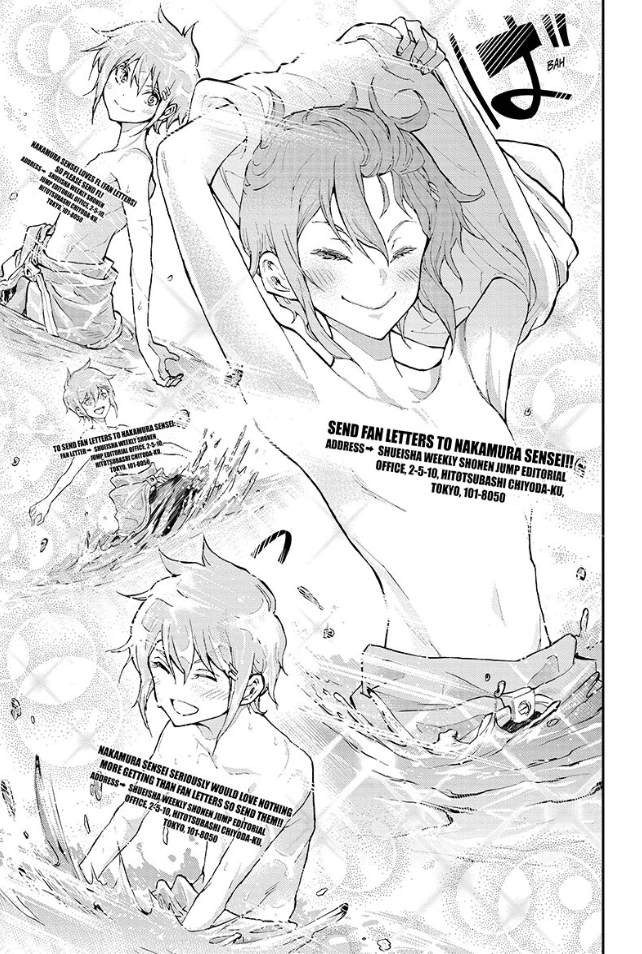 This kind of meta-humor reminds me of the dearly departed Gintama and proves that there is at least something that works in this otherwise ineffectual series. My theory is that Nakamura is quite proficient as an artist, as evidenced by the mechanical designs and background art as well as the creative censoring technique, but has trouble coming up with good story ideas – hence why he keeps returning to the same idea of Chris as a girl again and again.

Only time will tell whether or not Nakamura is able to make up for his own weaknesses and find a decent idea for a story. And if the end of Agravity Boys chapter 4 is anything to go by, that development might come sooner rather than later – the radar beeping to signal that something is on the way to visit the four shipwrecked boys.

There are many series in Weekly Shonen Jump that have managed to improve over time – Nakamura’s peer Tsurun Hatomune has done exactly that with his Mitama Security: Spirit Busters, so I’m still holding out some hope for the future of Agravity Boys. Let’s just hope that these improvements come sooner rather than later…