Hello there, and welcome to Your Manga Week. Finding time to keep up with all the manga that releases each week can be difficult, so I’m here to tell you what’s worth your time and what’s not. We’ll also be discussing story and arc developments as they come. This week, we’re chatting Chainsaw Man chapter 42, Dr. STONE chapter 125, Attack on Titan chapter 122, and Samurai 8: The Tale of Hachimaru chapter 22.

My thoughts this week especially go out to those affected by Typhoon Hagibis, which struck the Kansai area to deadly effect this weekend. It’s times like these when sitting down with some good manga can be crucial, so it’s great news that VIZ Media have made chapters 122 through 162 of My Hero Academia free to read until October 17. I don’t know who needed to hear that, but if someone did then I’m more than happy to oblige.

Just as I waxed lyrical about the current trajectory of Tatsuki Fujimoto’s storytelling in comparison with his explosive debut work, Chainsaw Man chapter 42 suddenly gets me firmly back on his side.

Chainsaw Man introduced the character of Reze back in chapter 40 as a potential secondary love interest for protagonist Denji, and chapter 42 really turns up the heat. 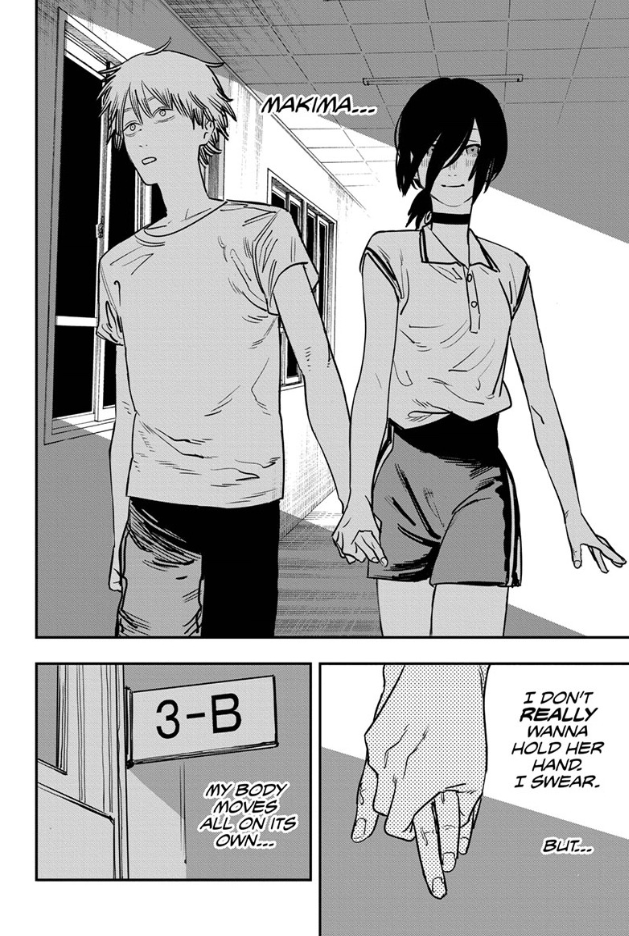 True enough, it doesn’t take long before the sexual tension starts to crank up. They indulge in some flirty banter in the form of Reze ‘teaching’ Denji so that he can understand what school is like, before heading to the school pool to strip off and swim like a REM music video. Is it me, or is it a little hot in here? 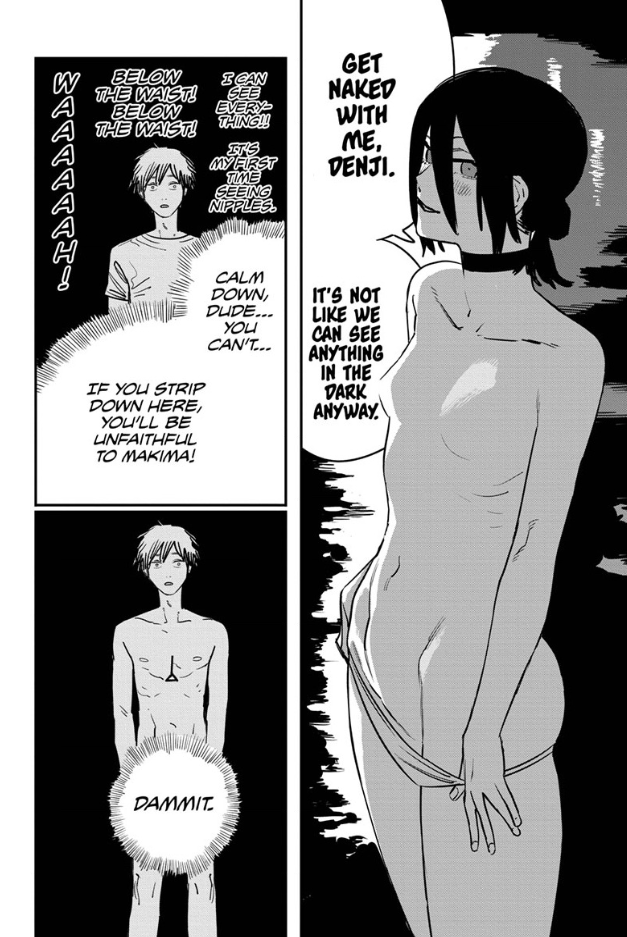 Obviously, this presents a big dilemma for Denji. Previously, he had thought that his heart only belonged to Makima, but he’s falling seriously hard for Reze in Chainsaw Man chapter 42, who’s close to him in both age and temperament.

Depending on what happens between Denji and Reze from now on, this could have big repercussions on the narrative. Don’t forget that the only reason Denji became a Public Safety Devil Hunter was because of his infatuation with Makima, who uses his affection for her as a way to keep his powerful abilities as Chainsaw Man on her side. 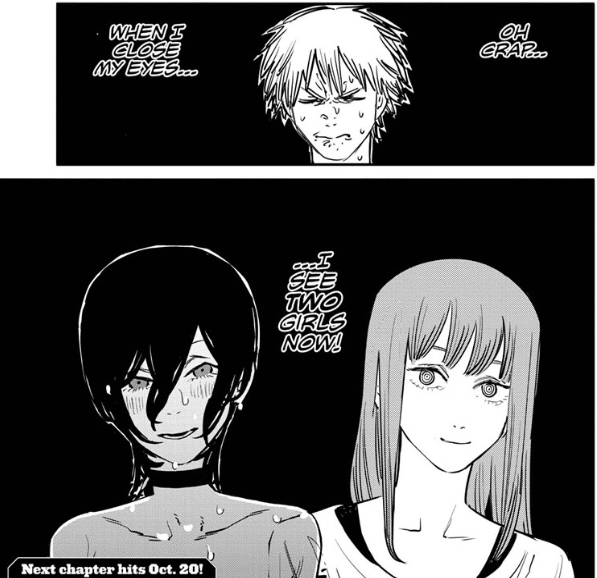 It doesn’t seem like Denji and Reze will have a happily-ever-after, though. Chainsaw Man chapter 42 leaves off with the ominous villain who’s been presiding over this mini-arc confronting Reze with a knife on her way to the washroom – potentially spelling an ill-fated conclusion to this budding romance. We’ll just have to wait until next week to see what happens.

It seems strange to think that I have yet to discuss Dr. STONE in this segment, as its one of my favorite manga in Weekly Shonen Jump right now. Truth be told, however, the manga’s been a little slow as of late, as Senku et al. make preparations to steal the petrification device from the inhabitants of Treasure Island. Dr. STONE chapter 125 finally gets things going once again. 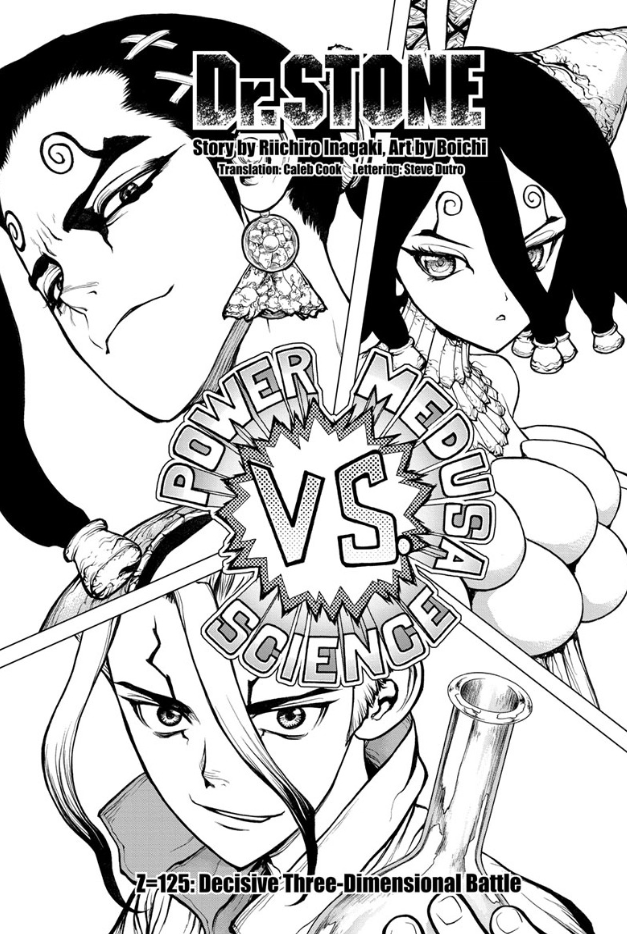 First up, all of the science needed to take on the Treasure Island’s warriors has been assembled. Chapter 124 saw Senku make a gun for the shifty ex-cop Yo, and Dr. STONE chapter 125 sees him complete carbon wire, a stabilization device and a variable resistor for the drone that Ryusui is to pilot in order to snatch the petrification device mid-air when Kirisame decides to launch it.

But a group of warriors will be needed to force their enemies’ hands, so Senku also sets about reviving Ginro, Nikki, and Magma to head up the army of hooded soldiers to spook Kirisame, who currently controls the petrification device. They’ll also need a fair amount of brawn to fight against Moz if he decides to betray the Kingdom of Science once Kirisame.

This leads to a touching moment where Ginro learns the fate of his friend and fellow guard, Kinro. Rather than giving into despair, he accepts the risk of taking on Kirisame and Moz and vows to save everyone – including Ginro. 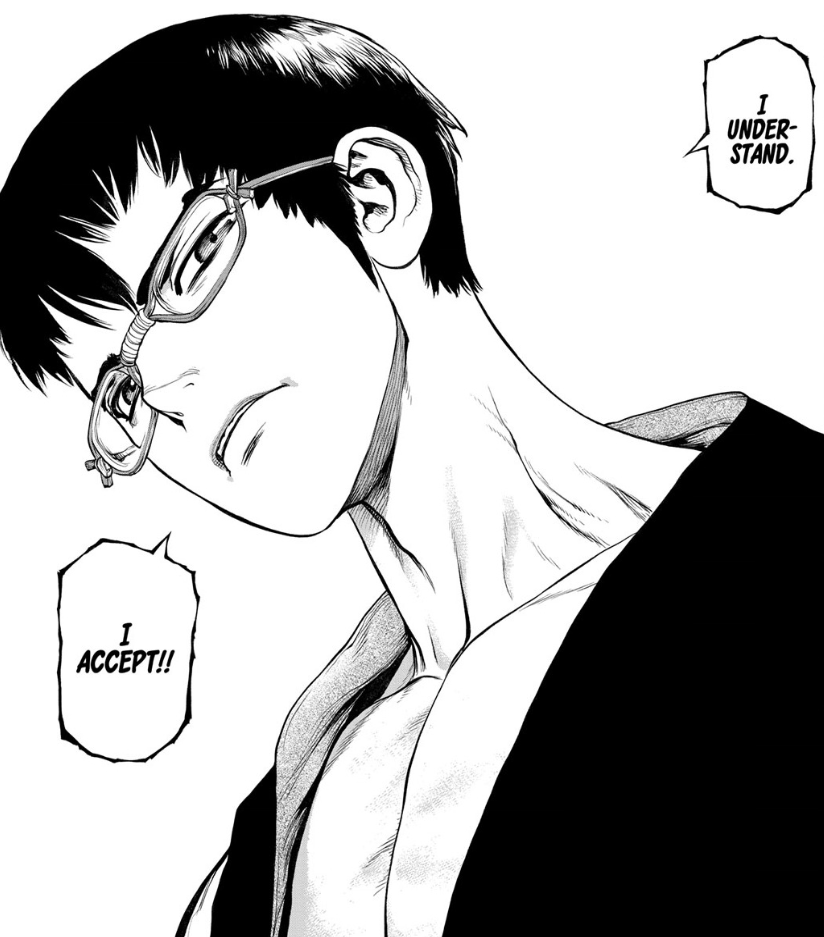 Now that Dr. STONE chapter 125 has set up all of the pieces for the climactic battle of this arc, I can’t wait to see how things will turn out. Will Moz truly turn on the Kingdom of Science, as Gen and Senku have theorized? Will Kinro and Kohaku be saved? Will they be able to pull off their ambitious plans and get their hands on the petrification device?

The only thing that’s dragged down this arc is the unfortunate feeling that Dr. STONE is barreling towards a conclusion rather rapidly. If the Kingdom of Science’s operation is a success, then they’ll be able to revive Tsukasa – thus drawing a close to the series’ last remaining conflict. I don’t exactly want to see this series end, but I suppose that I’d prefer the series left off on a good note rather than a bad one. We’ll just have to wait until next week to see what comes of all this.

Meanwhile, Hajime Isayama’s Attack on Titan continues on its wild ride towards its own conclusion after over 10 years of constant publication. This latest chapter offers us a key insight into the backstory of arguably the series’ most important character – the founder, Ymir – before leaving off on a cliffhanger that shrouds Eren Yeager’s true motivations in an ever-increasing mystery.

Firstly, Attack on Titan chapter 122 drags us back 2000 years in the past to see how Ymir got the Titan powers in the first place. As it turns out, she was initially a slave under the command of the chief of the first tribe of Eldian people and stumbled into some sort of magic tree-cave where the power of the Founding Titan magically attached itself to her. 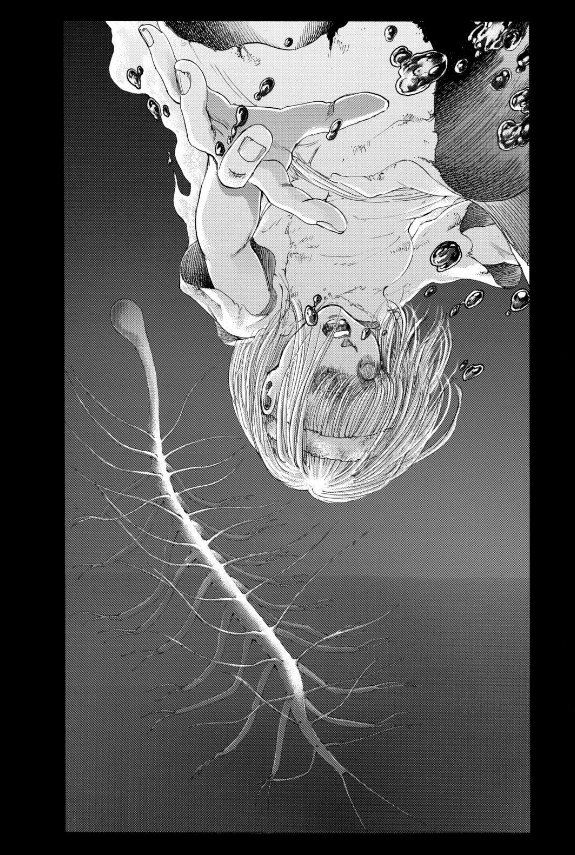 The Eldian chief then forced Ymir to use this power to spread the influence of the Eldian tribe across the land, including defeating the Marleyians and supposedly laying the groundwork for the Kingdom of Eldia that came afterward. Her children then ate her remains when she died taking a spear to the chest for the Eldian chief, once more establishing the tradition of Titan wielders having to eat each others’ spinal cords. 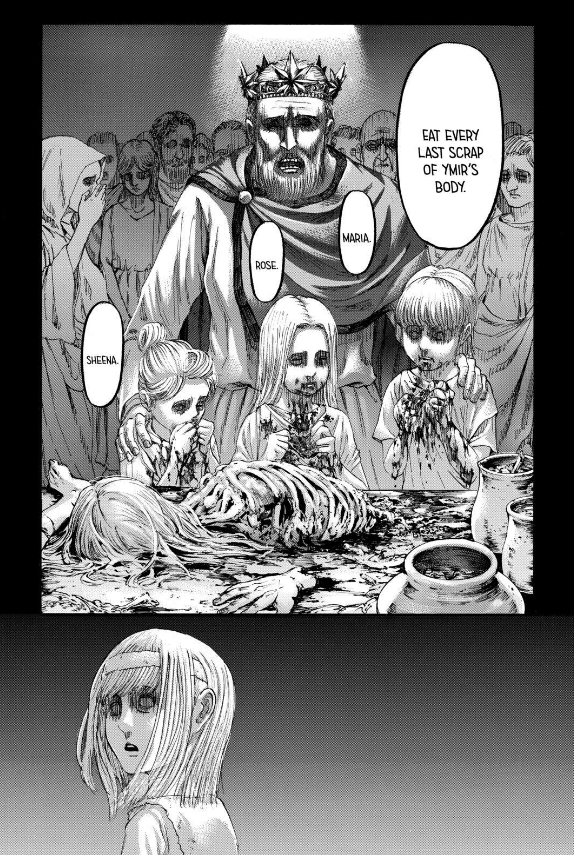 This is all delivered with almost no dialogue, instead relying on Isayama’s now-incredible art and affinity for displaying character emotions. In this sense, I absolutely adored Attack on Titan chapter 122, but something about the whole idea of the Titan powers coming from a magical tree doesn’t sit right with me. There must be something more to it, otherwise, Isayama wouldn’t have focused so much on fleshing out the world’s lore and history since the Marley arc. Right?

Nevertheless, this chapter leaves off on a tantalizing cliffhanger. Eren finally reemerges from the ethereal ‘Paths’ realm and back into real life, his head sprouting from his body where Gabi shot him just a couple of chapters ago as he made his way to Zeke. 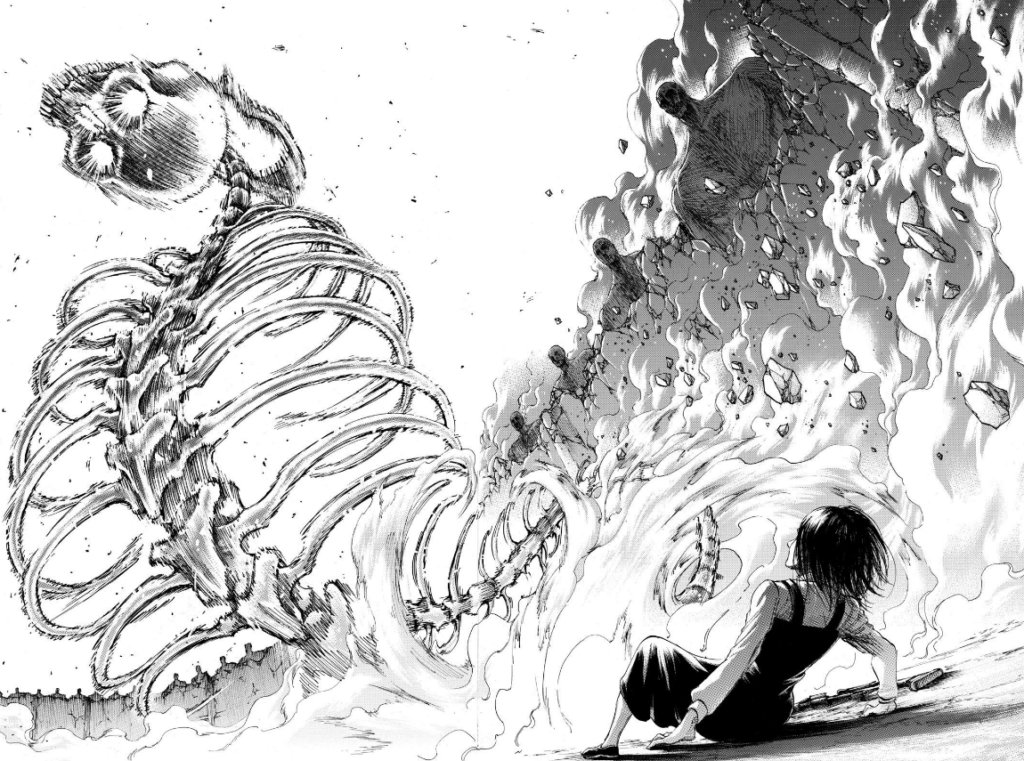 Then, all hell breaks loose as the Founding Titan emerges and the walls break down to reveal a legion of Colossal Titans. For all intents and purposes, it seems like Eren really did trigger the Rumbling after all, like the absolute madman that he is.

Even so, again I can’t help but think that there’s more to this than meets the eye. After all, Attack on Titan chapter 122 sees Eren declare to Ymir that his goal is to ‘End it all,’ which seems to me more like a promise to break the whole cycle of death and destruction that the Titan powers have brought ever since the time of Ymir, and triggering the Rumbling will surely only bring more death and destruction. Either way, we’ll just have to wait and see – I have no doubt that chapter 123 will also make an appearance during this segment when it launches next month in Bessatsu Shonen Magazine.

Samurai 8: The Tale of Hachimaru chapter 22

Given all of the bad news surrounding Masashi Kishimoto’s Samurai 8: The Tale of Hachimaru as of late, it almost makes me want to cut the series a little slack. That’s why I’m featuring Samurai 8 chapter 22 this week despite discussing chapter 21 just the other week, along with the fact that this week’s chapter is a marked improvement over last week’s.

Samurai 8 chapter 22 picks up right where chapter 21 left off, with Hachimaru dueling off against yet another samurai. This time, however, things are a little different. 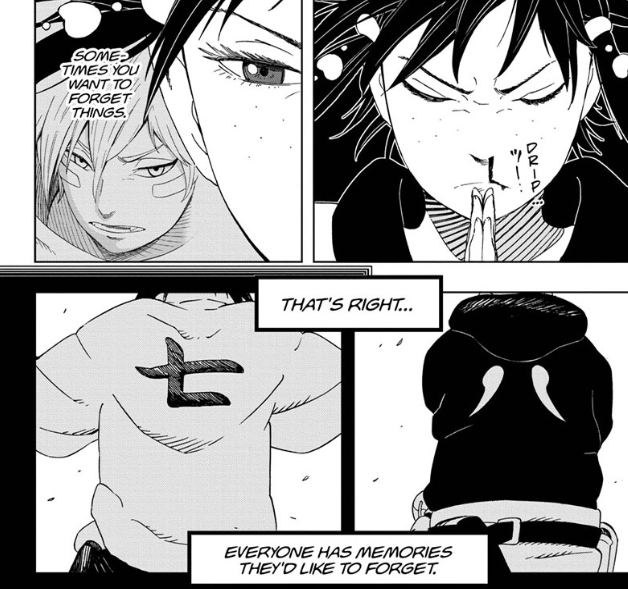 Instead of having to slog through yet another battle, Kishimoto uses this opportunity to explore Ann’s backstory as she meditates on the similarity between herself and Hachimaru, which forms the core of their powerful samurai-princess bond.

As it turns out, Ann once had a brother who was very much like Hachimaru. Although he wasn’t her real brother, he vowed to protect her as they tried to make a living on the streets. Unfortunately, however, he attempted to become a samurai by committing seppuku and ultimately failed, which lead Ann to try and repress her memories of him out of trauma. 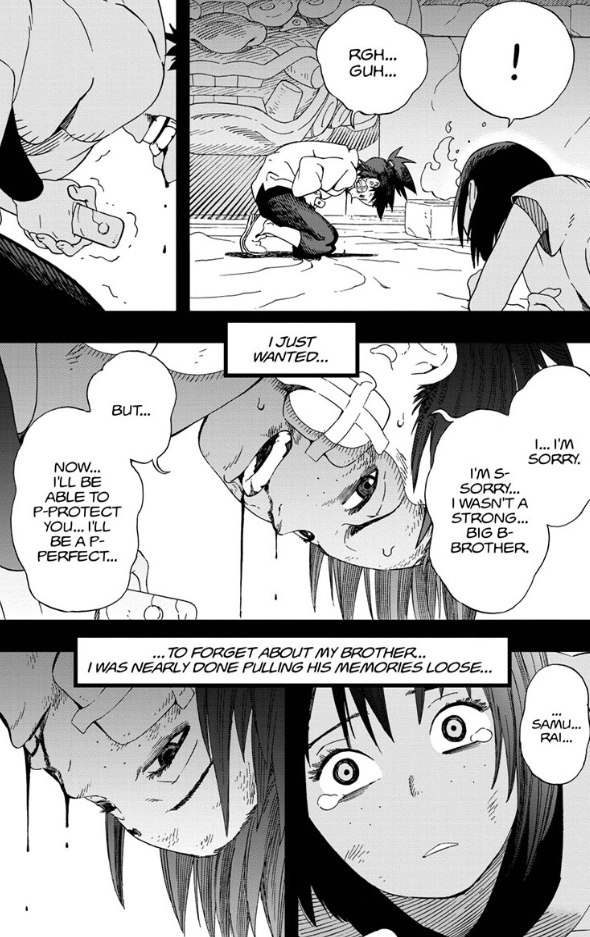 Her encounter with Hachimaru, however, has reawakened these memories and helped her deal with them in a much more constructive manner. By supporting Hachimaru as a princess, Ann hopes that she can carry on the wishes of her adoptive brother, named ‘Nanashi’ – a very clever parallel with Hachimaru’s own name, as ‘nana’ means seven and ‘hachi’ means eight. 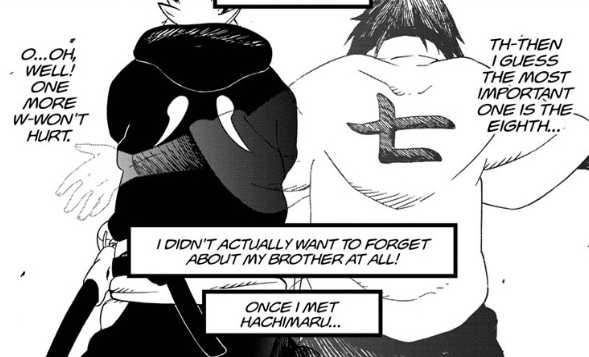 In general, Ann’s backstory as revealed in Samurai 8 chapter 22 reveals one of Kishimoto’s surprising strengths on the series thus far: character writing and character dynamics, particularly when it comes to male-female relationships, which were quite bad during the time of Naruto. (No, I’m not a fan of NaruHina.)

I sincerely wish that Kishimoto can find a way to make use of his newfound strengths in character writing instead of choosing to focus so much on samurai battles, which are proving to be disengaging in terms of both reception and sales due to their iterative and uninventive nature.

You can read Chainsaw Man chapter 42, Dr. STONE chapter 125, and Samurai 8: The Tale of Hachimaru chapter 22 for free via VIZ Media’s Shonen Jump service. Attack on Titan chapter 122, meanwhile, is available to read through Crunchyroll Manga (make sure you have Flash installed for viewing on a PC).