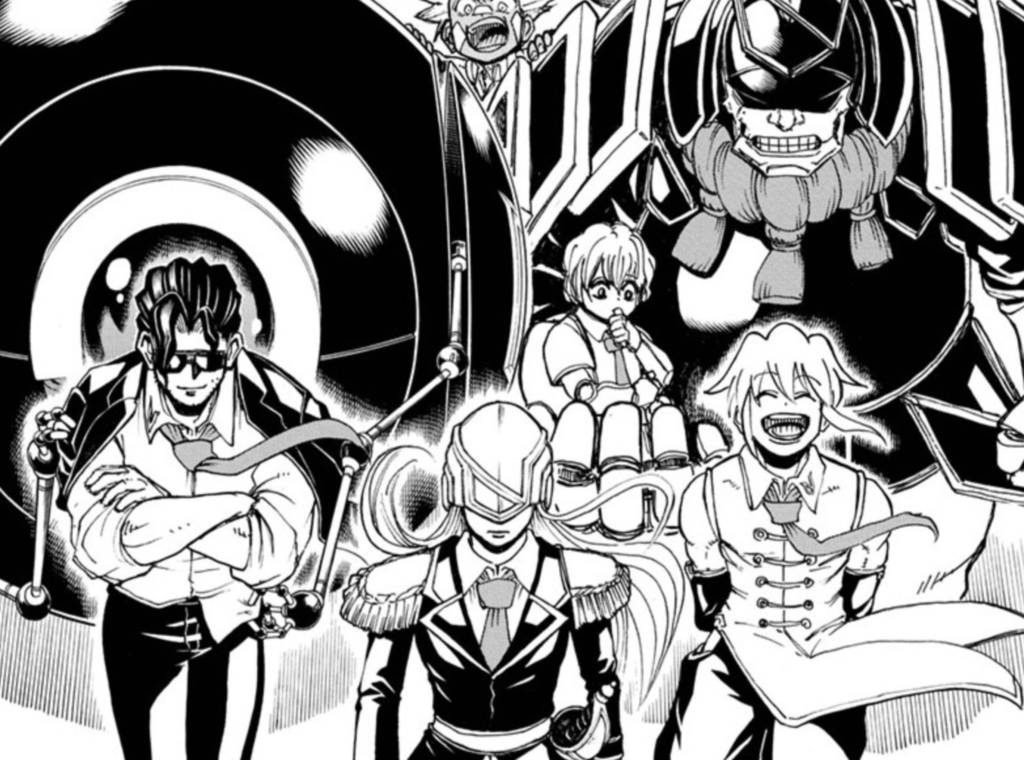 Hello there and welcome to Your Manga Week. Finding time to keep up with all the manga that releases on a weekly basis can be difficult, so I’m here to tell you what’s worth your time and what’s not. We’ll also be discussing the story and arc developments as they come. This week, we’re talking Undead Unluck chapter 9, Samurai 8: The Tale of Hachimaru chapter 42, ZIPMAN chapter 14, and The Promised Neverland chapter 171.

It really feels as if the end times are upon us. As I write these words, most of Europe is on lockdown due to the COVID-19 epidemic and here in the UK, we are being advised to stay indoors in order to minimize contact with other people. Is it any surprise, then, that I can’t help but see the apocalypse in almost everything? That includes this week’s manga chapters, so I decided to make it into a theme. Who says you can’t have fun in self-isolation? Anyway, on with the manga.

Don’t take this week’s theme the wrong way – Undead Unluck is nowhere near finishing. It only started out a couple of months back and has been very well received since then, so its inclusion in this week’s column is more about how its latest chapter uses the idea of the apocalypse to fantastic results. Simply put, Andy and Izumo are going to kill God.

If we dial things back just a little bit, you’ll recall that last week’s chapter saw our mismatched duo finally defeat Gina and gain access to the mysterious Union. This was already an interesting plot development given the fact that our ‘heroes’ would essentially become part of the ‘villains,’ but Undead Unluck chapter 9 makes it even more intriguing by explaining what the function of the Union actually is and what our heroes will be doing now that they are a part of it.

Essentially, the members of the Union are required to carry out certain tasks, known as ‘Quests,’ which usually involve either the capturing of some sort of ‘UMA’ artifact or the subjugation of a Negator, to which category Andy and Izumo belong. How are they given these Quests, may you ask? Why, by the Book of Revelations, the first artifact found on Earth, referred to as ‘Apocalypse’ and possessing of the power to bend reality to its will if any of the Quests go unfulfilled. And who controls this book? God, of course. 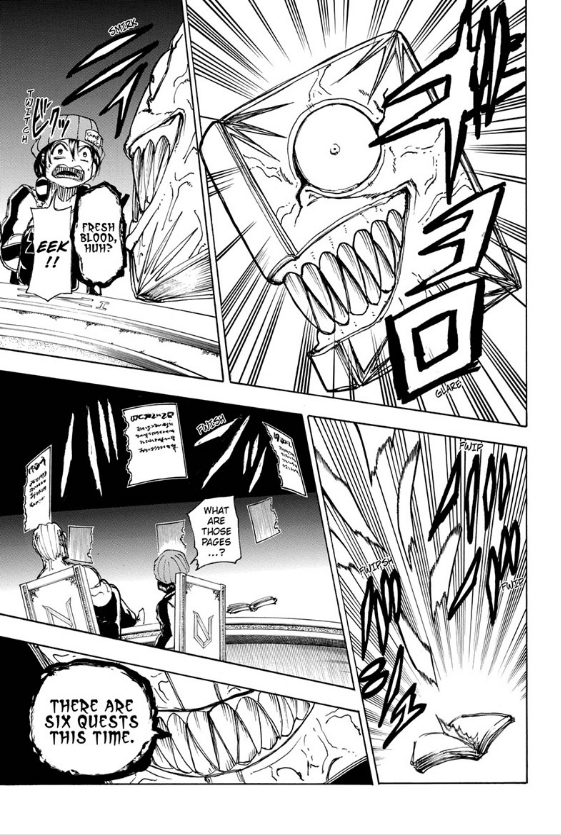 If you thought that Undead Unluck couldn’t get any crazier following its bombastic opening chapter and bonkers action setpieces, then you would be sorely mistaken. Undead Unluck chapter 9 proves that Yoshifuma Tozuka has plenty more tricks up his sleeve, leaving me confident that this series will continue to wow in months and years to come.

All of this isn’t just for the sake of shock factor, either. Many of the elements introduced in this chapter will be vital in shoring up the series’ structure and our characters’ goals going forward. Obviously, the whole Quest system will provide the narrative underpinning for the coming chapters, and Izumo’s conflict with the Union’s current leader makes clear what she will be striving for from now on. Essentially, she disagrees with the entire practice of bringing more people into the Union, but the only way that she can challenge this practice is by becoming the leader of the Union itself, which will involve fulfilling the most number of Quests.

Andy, of course, will support her in this endeavor in his continuing quest to pass from this mortal coil by making her fall in love with. Whether or not the pair will have anything to do with the current Union leader’s goal of killing God and putting an end to the ‘Rules’ being imposed on Earth remains to be seen.

Samurai 8: The Tale of Hachimaru chapter 42

While Undead Unluck chapter 9 may just be apocalypse-themed with a bright future ahead of it, the end times really are on the way for Samurai 8: The Tale of Hachimaru. It was leaked earlier this week that the series’ next chapter would indeed be it’s last, which wasn’t exactly a surprise given its current narrative trajectory. So, how did the series’ penultimate chapter work out? Not very well.

In last week’s chapter, Nanashi paid a visit to the imprisoned Hachimaru, whose words somehow gave him the strength to break free by transcending his mortal coil. In Samurai 8 chapter 42, then, we see Hachimaru use his new ephemeral form to pay a visit to the warrior god Fudo Myo-o, who explains how he did so. Basically, he was able to keep his consciousness alive while his body died and thus pass to a higher dimension. Stop me if you’ve heard that one before!

Coming out of the god dimension, Hachimaru fights Ata and his goons in Samurai 8 chapter 42 with renewed vigor. As to how Hachimaru is somehow able to tap into godlike powers, then it’s supposedly all about his love for Anne. There’s also the issue of the promise that Hachimaru made with his dad back when he was killed, but that’s the main reason. 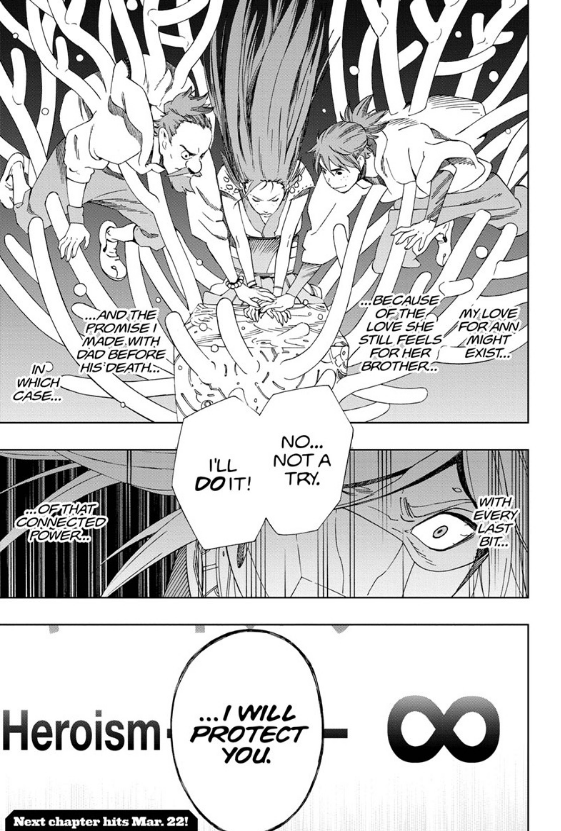 There’s plenty of reasons why this doesn’t work quite as well as it was no doubt supposed to. Firstly, there’s been very little in the way of romance between Anne and Hachimaru, limited to that one misunderstanding in chapter 38. Secondly, the series never seemed to be particularly preoccupied with love, instead emphasizing a sense of heroism and adventure. But, more importantly, even Hachimaru admits that this ‘love’ is rather one-sided, given that Anne sees Hachimaru as more of a stand-in for her brother than anything else. How are we supposed to value or care about something like that?

Part of this is no doubt due to the unfortunate timing of the ending. Back when Kishimoto was interviewed before the series started, it was very clear that he planned to visit multiple planets and have multiple adventures before eventually coming to an ending. Yet, the poor commercial and critical performance of the series has saddled it with an early ending, which has no doubt meant that much of the middle part of the story (the second act, if you will) has had to be cut. Perhaps Kishimoto would’ve explored the romance between Anne and Hachimaru a little more during these chapters – who knows. But all we have to go on is what actually got published, and nothing is quite hitting the way it is supposed to. Do I have high hopes for the ending? Absolutely not.

In this sense, it’s quite clear that Samurai 8 is going out with a whimper and not with a bang. But how about another series which is also (probably) on its way out? All the signs point to Yusaku Shibata’s ZIPMAN coming to an end very soon, and while the series has stumbled in the past, ZIPMAN chapter 14 was able to capture just a little bit of what had me so optimistic back when it first launched. The end times may be near, but that doesn’t mean that we can’t greet them graciously.

With the rest of Team Kaname all suited up and helping to fend off the giant robots that are besieging the city, ZIPMAN chapter 14 sees our titular hero head to Steel-X to face up against the mysterious ‘Chairman.’ What he finds there is surprising. Not only is his brother Koshiro still alive, his soul has been reprogrammed to follow the Chairman’s orders absolutely and then transplanted into another suit in the mold of Jackman, but with a white color scheme. When ordered to attack Kaname, he does so while separating Kaname and Jackman in his head, thus justifying his actions. But when the Chairman orders him to attack Cheena, things take a tense turn. Will Kaname be able to stop him? Will he truly be able to harm his childhood crush? It’s a tense chapter that has me remembering why I liked the series so much when it first launched. 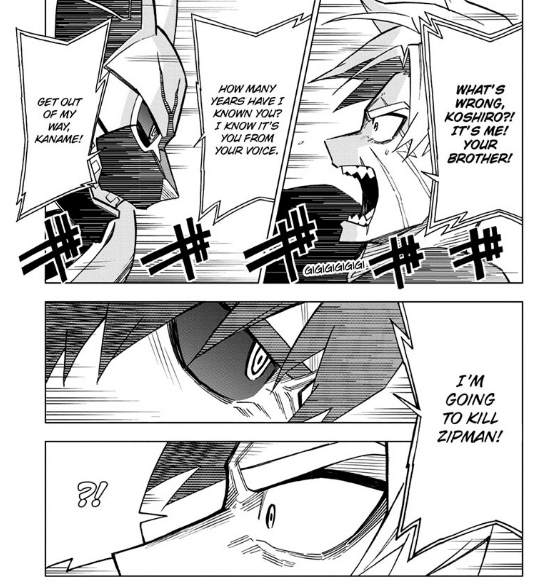 Such moments in ZIPMAN chapter 14 are what make me a little sad that ZIPMAN is, for all intents and purposes, coming to an end very soon. The whole idea for the finale too, with its fairground-like hellscape and abundance of cool mecha suits, is one that I would’ve like to have seen properly set up and established. If given time, I’m sure that Shibata would’ve been able to make it work. But, alas, the world of Weekly Shonen Jump moves fast and takes no prisoners.

On a final note, we should touch on the name for the new, white version of Zipman that Koshiro is revealed to inhabit in ZIPMAN chapter 14. The Chairman calls it ‘Weiss Zipman,’ which feels like it was taken straight from the tokusatsu book of clichés – and I’m all for it.

One final series that is also in the middle of its own, indisputable final arc is The Promised Neverland. Emma and friends launched the assault on Grace Field House a couple weeks back, signaling the series was on both the figurative and literal home stretch. They already managed to avoid the nightmare scenario of being killed and captured by Peter Ratri thanks to the betrayal of the Moms, under the leadership of Grandma Isabella, but things are progressing in other areas as well; in a surprising turn of events, The Promised Neverland chapter 171 brings back Grand Duke Leuvis to devastating effect.

In many ways, bringing back Grand Duke Leuvis is a welcome move. Not only does it harken back to one of the series’ best arcs, but it also brings his unique disposition back into the mix of an already chaotic situation. Considering the way that he single-handedly brings down Ratri’s puppet government over the course of The Promised Neverland chapter 171, we can surely expect this wildcard to be even more dangerous going forward. 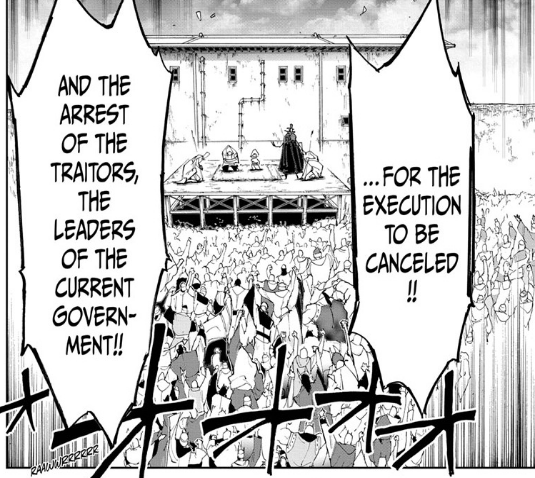 Nevertheless, last time we saw Leuvis he was being shot in the face by Emma, so the question remains as to how he survived (although I am reliably informed by the wiki that his corpse disappeared in chapter 96). Furthermore, his turn towards the ‘good’ side comes a little too thick and fast, only explained with a few bits of exposition on the part of Sonju. In general, Kaiu Shirai could’ve done with telegraphing this change a little more, but I suppose that there will be opportunities to make up for this in the future.

Speaking of the future, one of the most important developments in The Promised Neverland chapter 171 is that the dastardly Peter Ratri has a new goal: kill Emma, thus breaking her promise with the mysterious ‘Him.’ This is the first we’ve heard of the new promise in a good while, which begs the question of whether we’re finally going to find out what it is. Will the promise even break with Emma’s death? We’ll just have to wait and see.

You can read Undead Unluck chapter 9, Samurai 8: The Tale of Hachimaru chapter 42, ZIPMAN chapter 14, and The Promised Neverland chapter 171 for free via VIZ Media’s Shonen Jump.