Hello there, and welcome to Your Manga Week. Finding time to keep up with all the manga that releases every week can be difficult, so I’m here to tell you what’s worth your time and what’s not. We’ll also be discussing story and arc developments as they come. This week, we’re chatting SPY x FAMILY Extra Mission 2, Dr. STONE chapter 126, Mission: Yozakura Family chapter 9 and Mitama Security: Spirit Busters chapter 9.

Great news this week for Shonen Jump subscribers – chapters 1 through 37 of JoJo’s Bizarre Adventure: Diamond Is Unbreakable are now available in the digital vault, with more chapters set to come. Not so great news for Japan this week though – the fallout from Typhoon Hagibis continues, and the national rugby team lost to South Africa last weekend. Oh well, at least we have some good manga to enjoy.

Speaking of Shonen Jump, Tatsuya Endo’s SPY x FAMILY made a surprise appearance in this week’s issue no. 47 of Weekly Shonen Jump with the special chapter ‘Extra Mission 2.’ VIZ are calling it chapter 15.1, but I’ll stick with what it says on the lead page in the name of consistency. 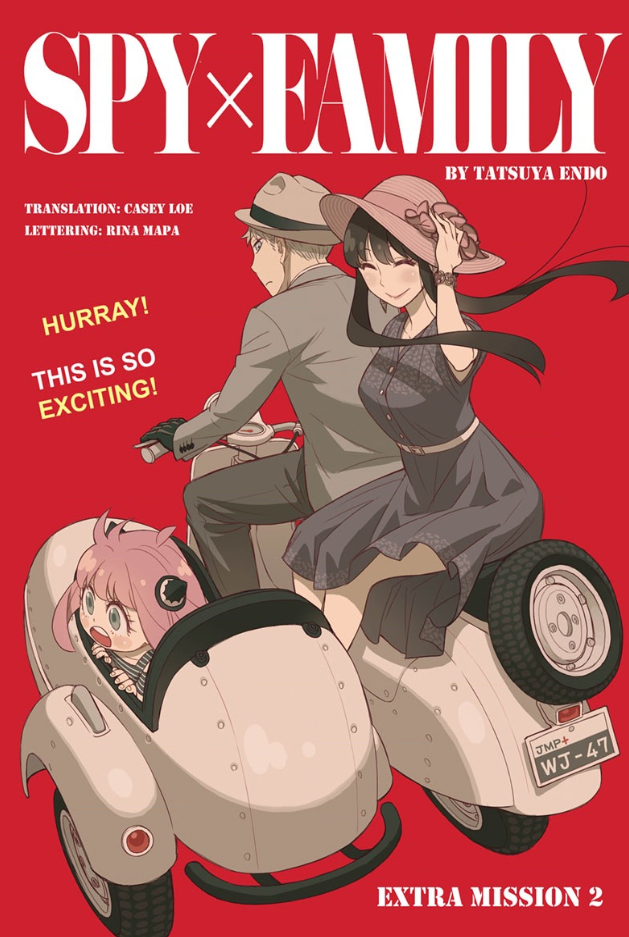 As you might be able to guess from the title, this isn’t the first time that SPY x FAMILY has published an extra side chapter. Back when the first volume for the series was released back in June, another Extra Mission (again, VIZ calls it chapter 8.5) came with it, focusing on a day out for the adorably dysfunctional family.

In this sense, SPY x FAMILY Extra Mission 2 is very similar. It focuses on another day out for the family, only this time in the form of a date between Yor and Lloyd. As you might expect, however, things don’t exactly go to plan.

The only reason that the sham couple decided to go out on a date in the first place was because Lloyd interpreted Yor’s pained expression (see below) from being shot in the butt during one of her jobs as a contract killer as annoyance and displeasure, which he seeks to remedy so that their relationship can continue smoothly for the sake of his job. 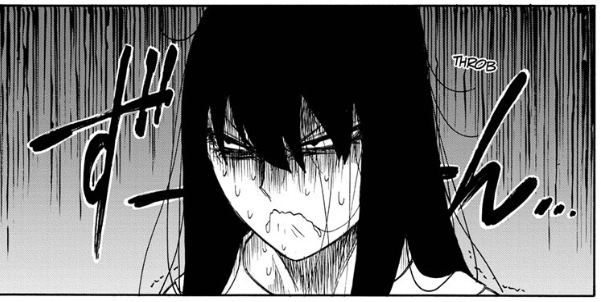 Yor’s painful injury then becomes the butt (sorry not sorry) of the joke for most SPY x FAMILY Extra Mission 2, as Lloyd desperately tries to make her feel better by taking her out on the town, but she can’t sit down due to the pain in her rear end. 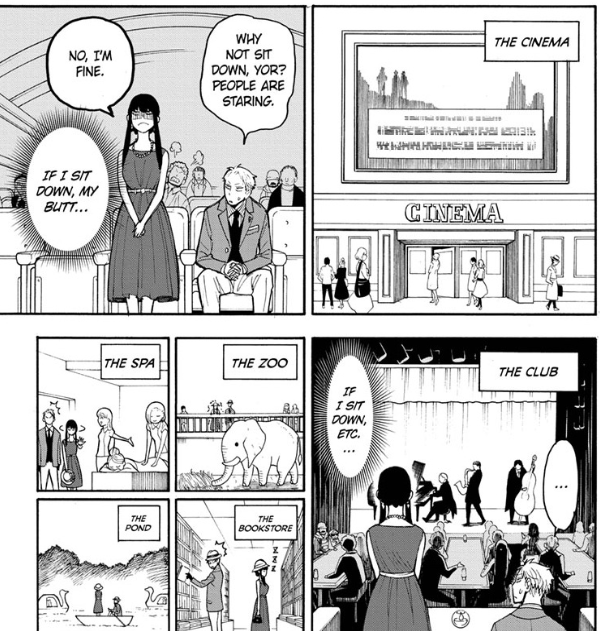 This escalates throughout the chapter, eventually leading to a hilarious conclusion where Anya takes down a would-be assassin that she uncovered thanks to her psychic powers, plus the fact that she was tailing her mom and dad the entire time. 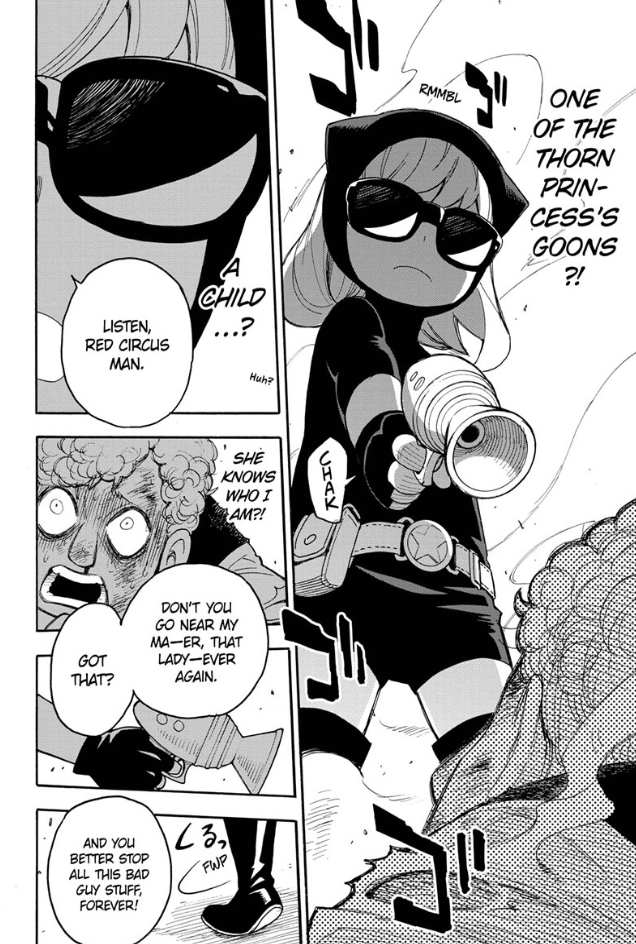 While the writing in this chapter is excellent as usual, it’s Tatsuya Endo’s art that brings this all together. His eye for goofy expressions and unique character designs are what make so many of the gags land so well, so well that the Weekly Shonen Jump team are no doubt kicking themselves due to the fact that they let such a talent get nabbed by their younger brother, Jump Plus. Still, they at least managed to get a guest appearance this time around.

Not that Weekly Shonen Jump doesn’t have strong series of its own – it has lots of them, and Dr. STONE is one of them. I know that I discussed the series just last week, but it seems as if I jumped the gun a little too early. If chapter 125 was a taste of things to come, then Dr. STONE chapter 126 is the full course. 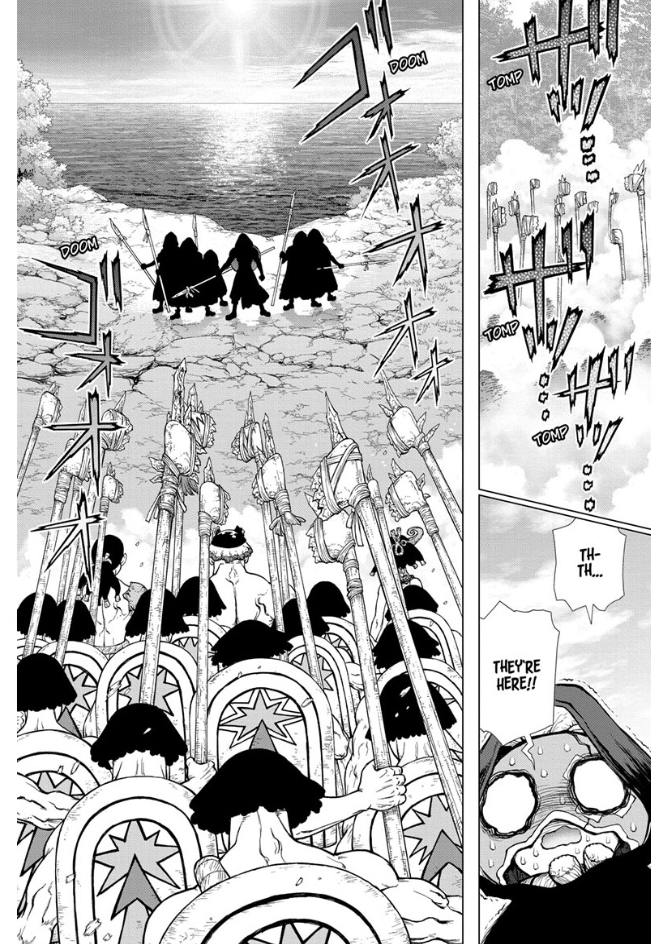 The final showdown between the Kingdom of Science and the Petrification Kingdom that the series has been building up for weeks now is finally here, and it’s pretty exciting. Senku and his friends are betting everything on this final confrontation – not just the lives of Ginro and Kohaku, but also a final answer to the mystery behind the petrification that started the whole series off in the first place.

Things go well enough at the beginning, as the Kingdom of Science’s strongest warriors manage to beat back the forces of the Petrification Kingdom. Leading the force is Kinro, now armed with that golden spear that he always secretly wanted, all the way back during the Village arc. 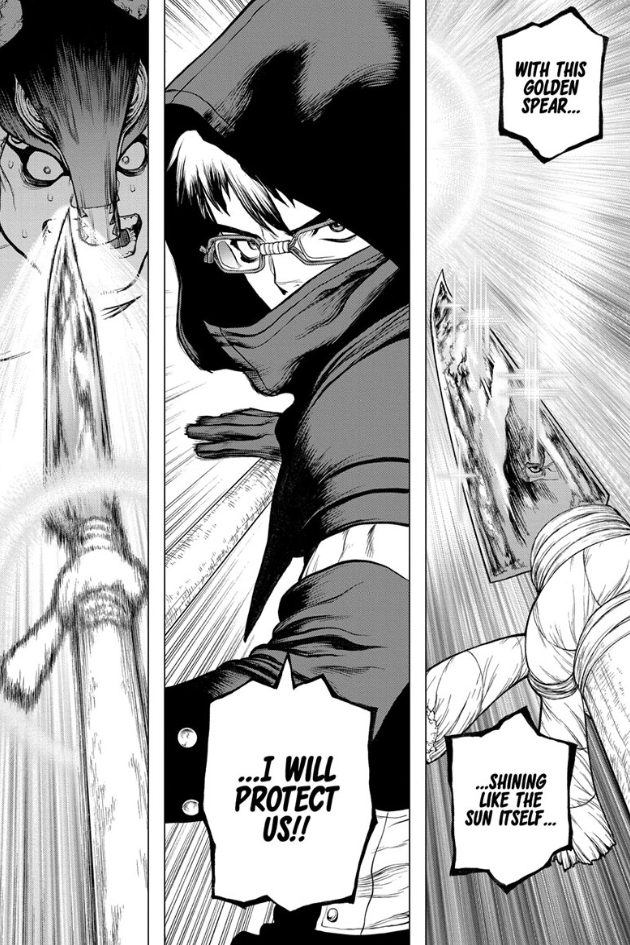 Kinro isn’t the only one to get a great character moment in Dr. STONE chapter 126. About halfway through the battle, it comes time for Moz to feign injury at the hands of the Kingdom of Science so that Kirisame will launch the petrification device, and so invites Suika, Yuzuriha and Amaryllis to come at him in the most adorable attack I think I’ve ever seen.

Just as the battle nears its climax, however, it becomes evident that things aren’t going to go exactly according to Senku’s plan. Just before Kirisame goes to throw the petrification device at the behest of Moz, there’s a flashback to a secret conversation between Minister Ibara and Kirisame – after which Ibara boldly proclaims that he ‘wins.’ 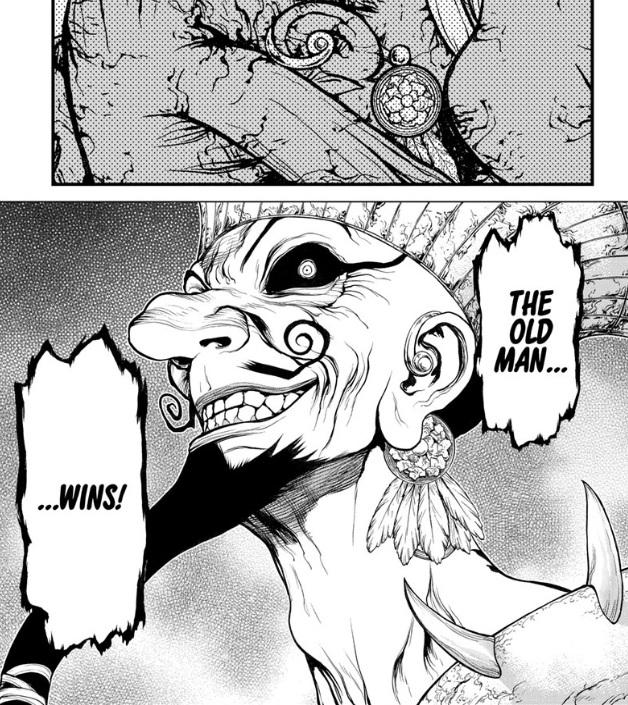 Clearly, there’s been some kind of deception regarding the true nature of the petrification device. We’ve always believed it to be the thing that Kirisame throws up in the air, but Dr. STONE chapter 126 suggests that the fancy earring that Ibara sports is somehow just as powerful. I’m guessing that it’s only when the light from the device reflects off the earring that it becomes effective, but we’ll just have to wait and see until next week to find out.

Here’s a new addition to Weekly Shonen Jump that I’ve yet to talk about. Mission: Yozakura Family suffers from some unfortunate timing that makes it seem like a shameless cash grab in light of SPY x FAMILY’s success, but I doubt that that’s the case. The series had probably been in the pipeline before launching for a while now, and it has its own set of distinct, compelling features that Mission: Yozakura Family chapter 9 shows off very well.

Mission: Yozakura Family chapter 9 follows our protagonist, Taiyo, as he’s taken in for questioning by a suspicious policeman that we already saw at the beginning of the chapter smashing some faces with a hammer. 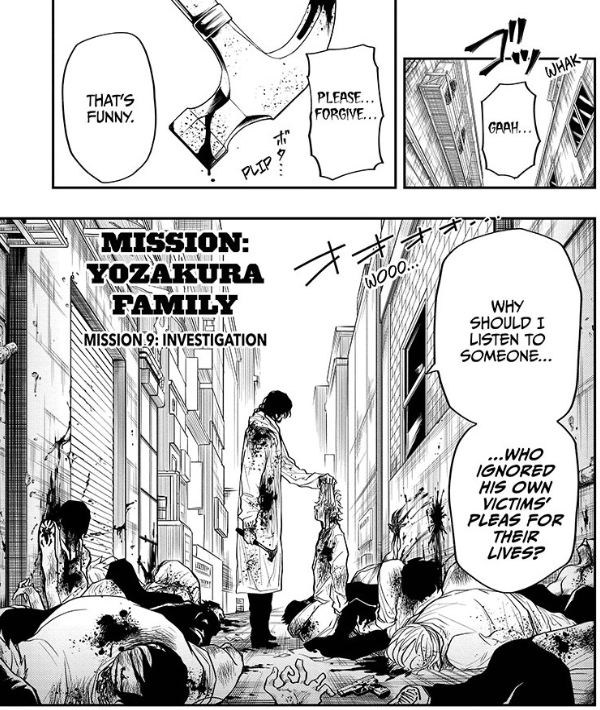 Taiyo’s loyalty to the Yozakura family, as well as his ability to keep his cool under pressure, is promptly tested as the policeman gets more and more violent, first forcing him to drink poison before physically assaulting him. 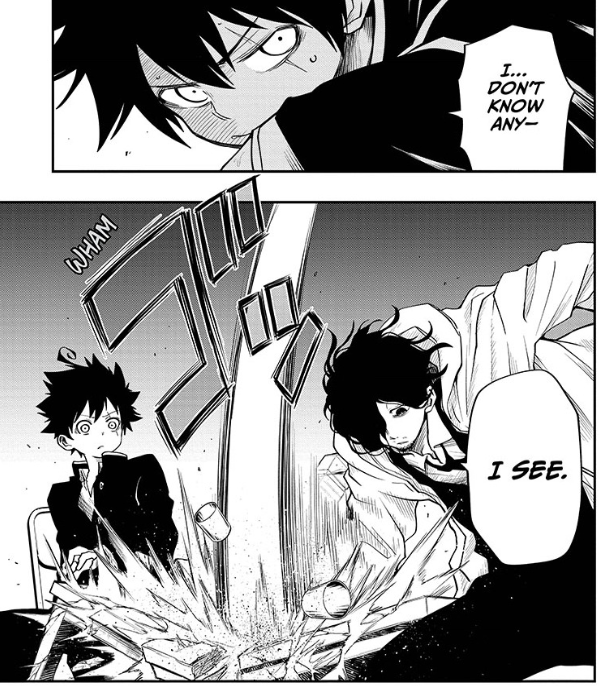 He manages to get through the ordeal without blabbing, however, whereupon it is promptly revealed that the whole thing was a set-up by Taiyo’s sadistic brother-in-law, Kyoichiro, who has been mentoring Taiyo in the ways of a spy for these past few chapters. 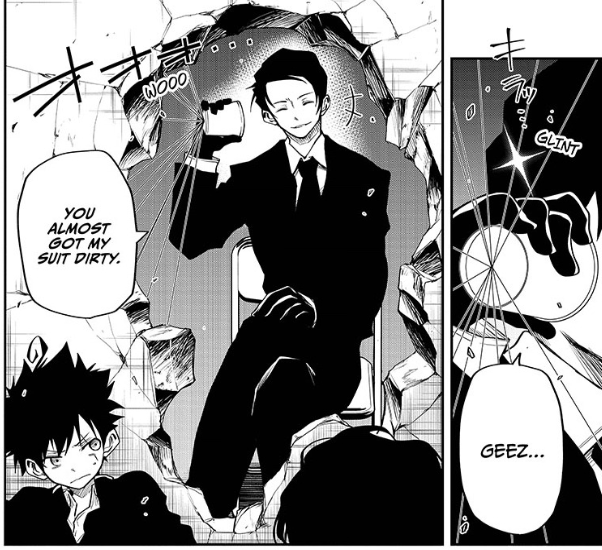 Mission: Yozakura Family chapter 9 is a testament to what makes this series so compelling. Instead of SPY x FAMILY’s comedy-infused espionage storytelling, Yozakura serves up more traditional slices of spy action. This chapter’s interrogation, in particular, reminds me of the brutal interrogation in 2006’s Casino Royale.

So effective was the escalation in this chapter that I was honestly surprised when the whole thing turned out to be a test from Kyoichiro, even if this does make the events of the chapter seem a little pointless in hindsight. As a whole, Mission: Yozakura Family thrives when dealing with more self-contained spy stories instead of grand, narrative arcs – something which this chapter thankfully honors, but it seems doubtful that the series won’t refrain from launching into another big arc sometime soon, presumably featuring the crooked cop, Seiji.

Mitama Security: Spirit Busters has come up a lot so far in the short tradition of this column, but I honestly can’t help myself. The series has improved so much that I’ve gone from actively disliking it to actually looking forward to it each week, as it’s starting to pretty consistently make me literally laugh out loud. In this sense, Mitama Security chapter 9 is no exception.

Our story this week is a little unusual as it actually follows on from some developments in last week’s chapter 8, where Mitama’s heart skipped a beat when Rena thanks him for taking her out at the weekend. Mitama thinks that something’s wrong with me because of that, and so goes to his friend/rival Soya for advice. 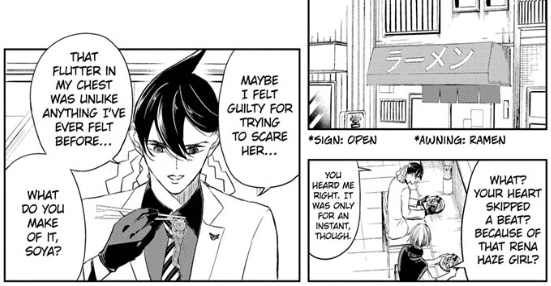 Soya immediately claims that Mitama is being haunted by one of Rena’s many spirits, and offers to take him for an exorcism. Mitama gladly takes him up on that offer, but, as it turns, Soya isn’t being truthful with intentions.

On the very next page, Mitama and Soya are happily playing a little bit of bowling before Mitama suddenly realizes that they were supposed to go and get an exorcism, and last time he checked, bowling alleys don’t tend to offer that kind of service. 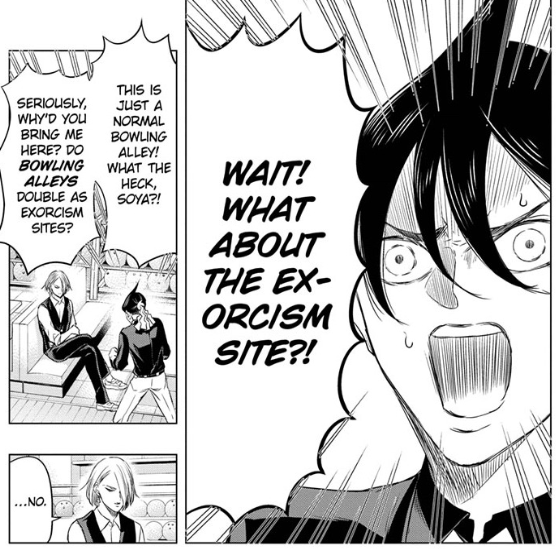 The dysfunctional pair then move on to the zoo, where the same realization occurs. This gag keeps escalating throughout Mitama Security chapter 9 to bigger and bigger proportions, and it honestly gets funnier and funnier each time. Soya and Mitama’s snappy dialogue also helps things along quite a bit.

This chapter then ends in a bizarre set-piece taken straight from It’s Always Sunny in Philadelphia as the two trade back-handed compliments and gifts, all the while going round and round on a merry-go-round. As it turns out, Soya just wanted to help Mitama take his mind off things, but he’s too conceited (read: tsundere) to lay bare his true intentions. 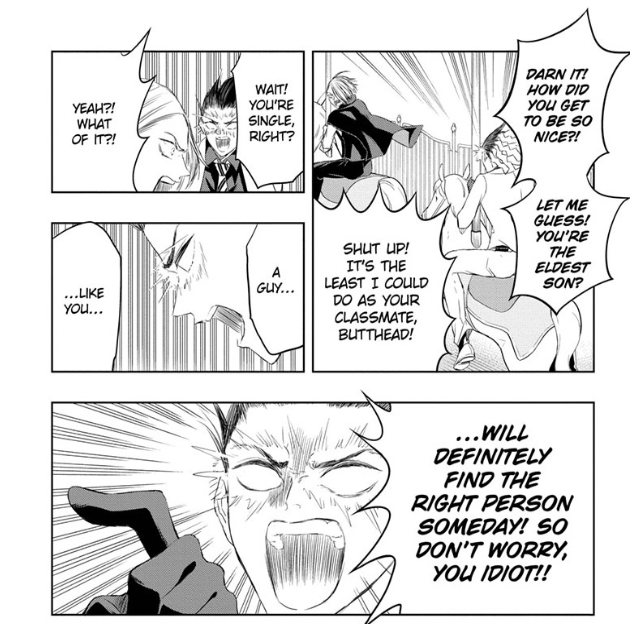 In general, Mitama Security chapter 9 is a testament to how much the series has improved over the past two weeks thanks to a stronger narrative focus and excellent character interaction. However, things aren’t going to stay that way forever – this chapter’s lead-in and lead-out, where Rena is ‘kidnapped’ by a mysterious man, seems to suggest that the series as a whole might be moving away from episodic skits towards more of an arc-based structure.

I’m of two minds when it comes to this. On the one hand, this makes things easier for author Tsurun Hatomune as he doesn’t have to think of a unique situation each week, but I’m afraid that the series might lose its newfound charm in the process. I suppose we’ll just have to wait until next week to find out just how this change turns out.

You can read Dr. STONE chapter 126, Mission: Yozakura Family chapter 9 and Mitama Security: Spirit Busters chapter 9 for free via VIZ Media’s Shonen Jump. The service also offers SPY x FAMILY Extra Mission 2, but you can also read it on Manga Plus for a limited time.