Mission: Yozakura Family Chapter 10 Proves Its Worth – Your Manga Week #4

Hello there, and welcome to Your Manga Week. Finding time to keep up with all the manga that releases every week can be difficult, so I’m here to tell you what’s worth your time and what’s not. We’ll also be discussing the story and arc developments as they come. This week, we’re chatting Mission: Yozakura Family chapter 10, Yui Kamio Lets Loose chapter 32, Chainsaw Man chapter 44, and My Hero Academia chapter 248.

Just as I rounded off last week talking about how Weekly Shonen Jump might be in dire straits heading into 2020, this week’s manga comes along to prove that there’s still life in the line-up just yet. The only thing I won’t be talking about is that new Dr. STONE spinoff, as I’ve already covered it. Incidentally, you’re looking for Halloween manga recommendations, then I’d recommend checking out Drifting Classroom by Kazuo Umezu (it just got a new ‘Perfect Edition’ release by VIZ Media).

Mission: Yozakura Family is back at it again this week in chapter 10 with another brilliant episodic piece of espionage action – proving that it’s definitely more than a simple pass at SPY x FAMILY’s incredible success.

Mission: Yozakura Family chapter 10 opens with a short but sweet slice of domestic bliss between the newly married Mitsumi and Taiyo, before their brother Shinzo calls the house in a panic in the middle of a mission. As it turns out, he’s used up all of his ammo and is currently trapped in a room with no escape. It’s up to Taiyo to come to the rescue – finishing off in a brilliant action-packed conclusion. 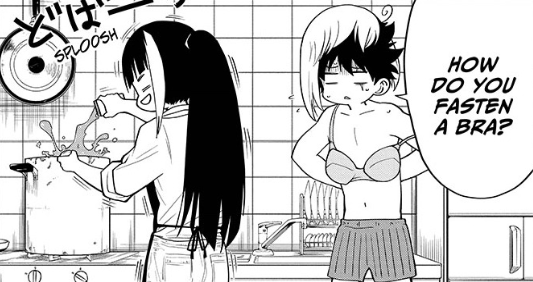 Humor plays a big part in making this chapter really come together. There’s gags from the word go as Taiyo turns up in a bra and wig in the third panel (he’s practicing his disguises), before the full extent of Shinzo’s obsession with guns becomes clear, with Mitsumi telling him to calm down by counting the diameter of his ammo, or how many bullets each of his guns hold. 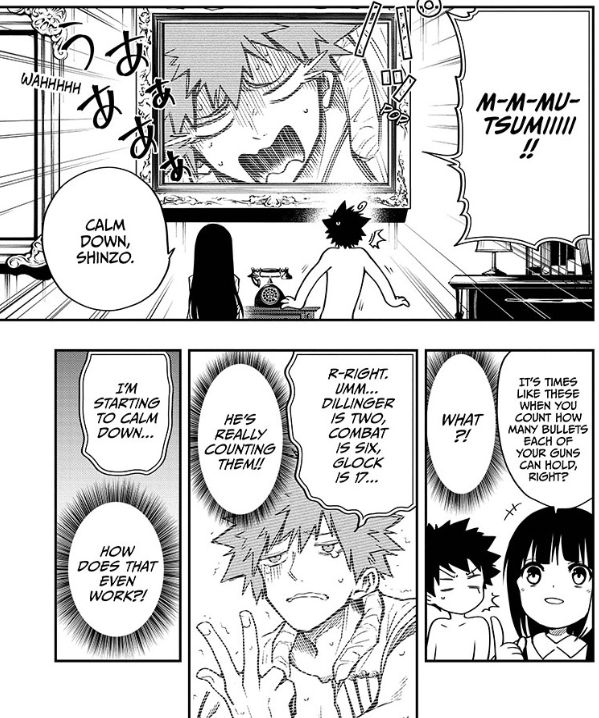 Even so, author Hitsuji Gondaira does have an important story to tell throughout Mission: Yozakura Family chapter 10. If last week’s chapter was all about setting up new characters for future arcs, then this week is all about strengthening bonds between current characters even further as Taiyo grows closer to his brother-in-law Shinzo and learns more about him over the course of the chapter. Of course, we also get some quality Mitsumi/Taiyo time that has been largely absent from previous weeks as Mitsumi has been kidnapped.

This creates a very warm, intimate feeling for the chapter, but that doesn’t mean that Hitsuji Gondaira is going to hold back on the (tactical) espionage action. In fact, Mission: Yozakura Family chapter 10 contains some of the best action sequences in the series thus far, as Shinzo demonstrates his incredible gunmanship and creativity under pressure – even taking down a sniper with a fork at the very end. In general, Mission: Yozakura Family chapter 10 is a great testament to how compelling the series can be when it plays its cards right. Through a combination of humor, family dynamics and inventive action, Hitsuji Gondaira can make this premise work despite the naysayers – let’s hope he keeps up the pace going into next week.

Unlike with Mission: Yozakura Family, I must admit that I haven’t been following Yui Kamio Lets Loose from the very beginning. In fact, I only just caught up the other week for my review. Nevertheless, I’m very happy that I chose this time to do so, as this week’s chapter was certainly a blast.

Yui Kamio Lets Loose chapter 32 finishes off the train battle that started back in chapter 29, as Kiito decides to face up to his jealous admirer Kara to save both her life and his friends’ – but not exactly in the way you’d expect.

Following on from the series’ other more cerebral fights, Kiito goes up against Kara not with his brawn, but with his brains. This means that, in a shocking turn, he decides to give Kara exactly what she wants – unconditional love for her and her alone, offering up his eyes in the process. 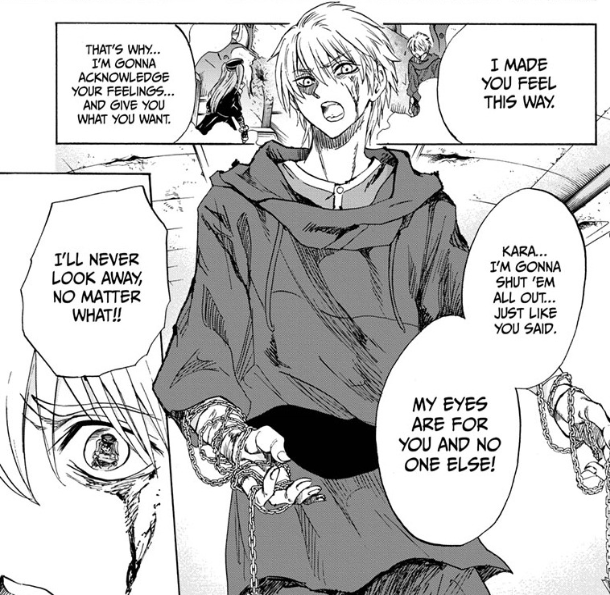 After taking a beating, Kara then lets her guard down and draws close to Kiito for a kiss – an opportunity which Kiito then uses to promptly rip the ‘mushi’ demon that is possessing her out from her mouth. It’s pretty gruesome but fits in entirely with the series’ developing ‘shoujo metal’ aesthetic. 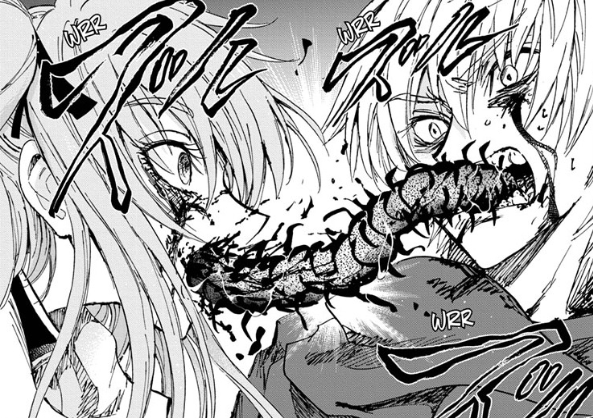 That scene isn’t, however, the only eye-catching thing in Yui Kamio Lets Loose chapter 32. It’s always surprising to see the type of content that’s allowed in a magazine such as Weekly Shonen Jump that’s ostensibly aimed at kids, but Kara’s threats that she’s going to make it so that Kiito is ‘paralyzed from head to toe’ so that she can ‘wait on [him] hand and foot’ are particularly shocking given that the series started off as a fairly innocent love comedy. Such is the power of serialization. 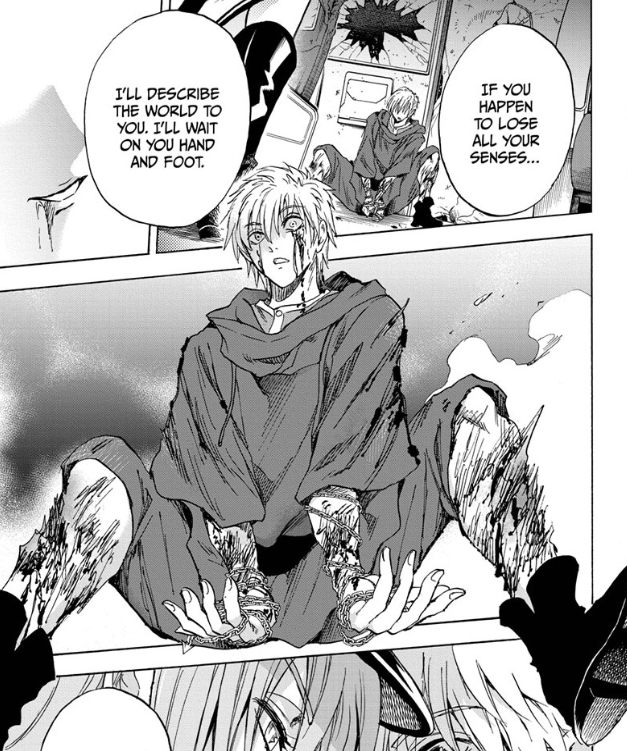 In comparison to previous chapters, Yui Kamio Lets Loose chapter 32 proves that author Hiroshi Shiibashi is much better at writing psychological battles than physical ones. While the previous chapter’s clashes were certainly entertaining, they definitely pale in comparison to the exciting twists and turns of this week’s chapter. As the series moves into a new conflict next week on the cast’s continuing journey to find the ‘Mushi Queen,’ I hope that we’ll see more of the author’s strengths than his weaknesses.

Finally, we come to some series that are more well-established, but by no means less exciting. Chainsaw Man chapter 44 definitely fits the definition of that word to a tee, as we finally get some comeuppance to Denji’s inner conflict between his two loves: Reze and Majima.

As was hinted in previous chapters, Reze is a demon. But what her true intentions were in getting so close to Denji remained a mystery: did she want to kill him? Convince him to join her side? For that matter, what kind of a Devil even was she?

Chainsaw Man chapter 44 provides the answers to those questions and more. Firstly, we begin to understand that Reze’s intention was to drive a wedge between Denji and Public Safety by making her first fall in love with her, then convincing him to run away with her.

Secondly, this chapter shows us Reze’s true colors – revealing her to be a hostile enemy Devil in a gruesome scene where she leans in for a kiss, only to break away after chomping off the end of Denji’s tongue. It’s quite kinky. 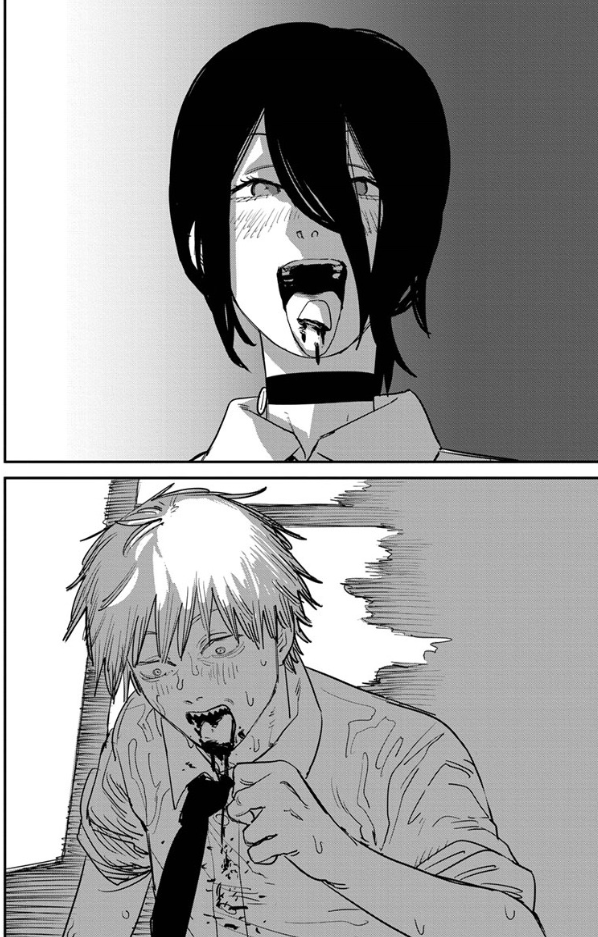 It’s also during this scene that we see the return of some of Tatsuki Fujimoto’s striking visual compositions from his debut work Fire Punch, as the whole drama of Denji realizing that Reze is an enemy is played out across nearly six pages without any dialogue. This just makes the whole thing hurt even more, as Denji blindly panics, his guard completely dropped. 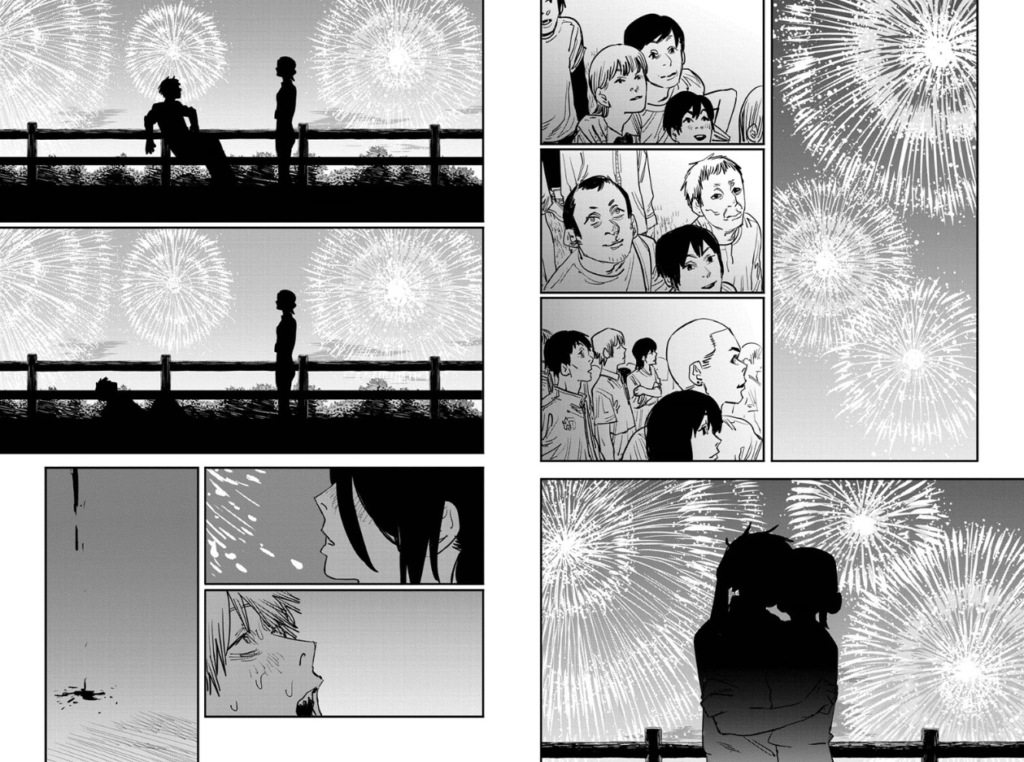 He’s only then saved from certain death by his faithful disciple, the Shark Devil, who swoops in and reveals that Reze is the ‘Bomb Devil,’ a fact which she helpfully confirms with a character transformation. 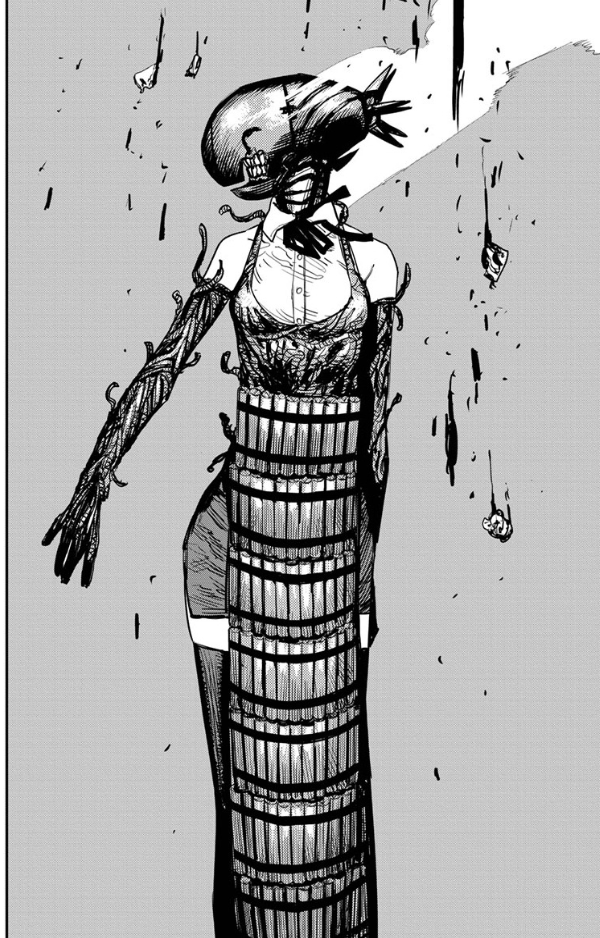 The end of Chainsaw Man chapter 44 then sets up perfectly for another Devil fight next chapter along the lines of the last fight between Denji and the Katana Devil. Only, this time I’m genuinely unsure what will happen – will Denji be able to defeat Reze given his feelings for her? Were Reze’s feelings really nothing more than a front to get close to Denji? We’ll just have to wait until next week to see.

In comparison to the bloody violence of this week’s Chainsaw Man, My Hero Academia chapter 248 looks relatively tame. But don’t be fooled – while this chapter might be low in bombastic action, it’s no less exciting in terms of character development and progression.

Deku, Todoroki, and Bakugo have all started their internship at Endeavor’s hero agency in earnest, and chapter 238 follows them on patrol with the number one hero. Try as they might, however, they just can’t match the pace of Endeavor – meaning that their ‘mission’ for the internship (defeat a villain faster than him) still remains largely out of reach. 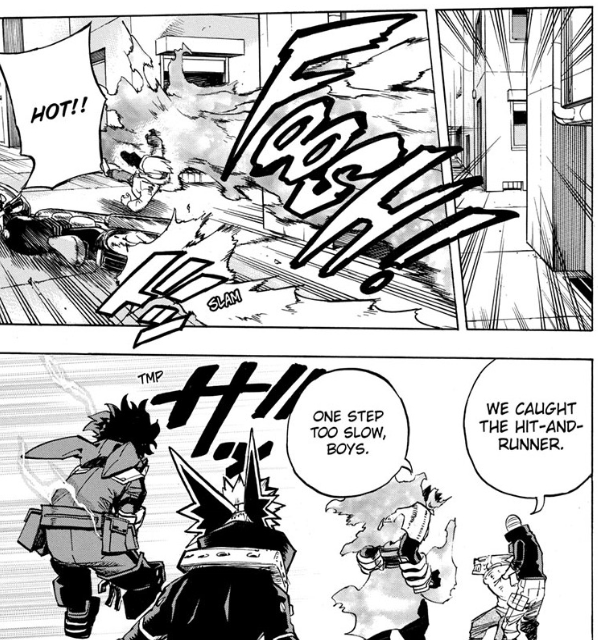 Nevertheless, Endeavor is willing to help the next generation of heroes out just a little bit. He talks a lot in My Hero Academia chapter 248 about the importance of training abilities until they are ‘second nature,’ helpfully using the example of a passing motorist to illustrate his point. 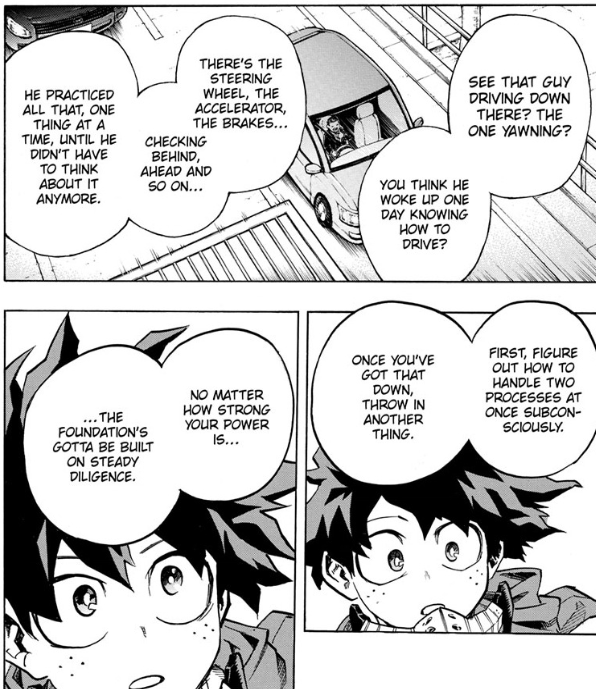 This advice is a little different from the flashier training over at UA which talks about special moves and fancy equipment, but it’s exactly what Deku and co. were looking for. In order to face up to the growing threats in the My Hero Academia world, they need to get stronger in whatever way they can – and an internship with Endeavor is the perfect way to teach them how to do this.

Following Endeavor on the job through the eyes of our main characters in My Hero Academia chapter 248 also, in turn, offers a rare glimpse into how heroes outside of the school operate and work in the ‘real’ world. In a world that’s so wide and expansive as Kohei Horikoshi’s, any sort of world-building is always greatly appreciated.

My Hero Academia chapter 248 proves, however, that Kohei Horikoshi has no intention of upping the pace anytime soon. Not only is this chapter relatively isolated from the overall plot (even if it presents a narrative throughline for our characters’ development), it ends with Todoroki’s older sister suggesting to Endeavor that he bring over the interns for dinner – setting up the next chapter as a relatively innocuous slice-of-life story. 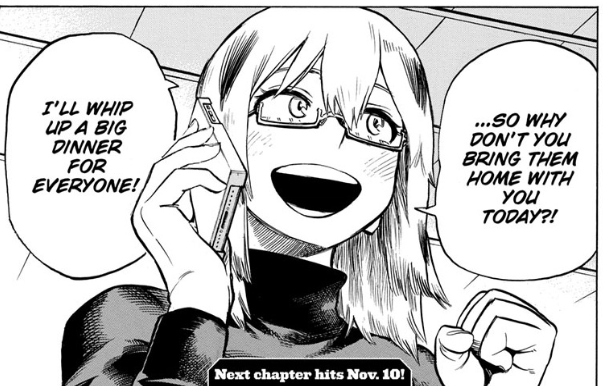 We’ll have to a full two weeks for that chapter, however, as Horikoshi is going on break next week. If the author needs time off to rest or conduct research, then that’s fine, but I can’t help but wonder if the remarkably slow pace of the story at the moment will end up hurting the series as a whole if it continues – indeed, there are many who are very vocal in their distaste for the series’ current direction. At least we have Studio BONES’ anime adaptation, right?