Hello there, and welcome to Your Manga Week. Finding time to keep up with all the manga that releases each week can be difficult, so I’m here to tell you what’s worth your time and what’s not. We’ll also be discussing the story and arc developments as they come. This week, we’re chatting Double Taisei chapter 24, Mission: Yozakura Family chapter 11, and SPY x FAMILY Short Mission 1.

Have you seen the news about the new version of OTAQUEST yet? It’s coming very soon, and our whole team is very proud of the work being put into it. Our little mascot Ura-chan is just the cutest, wouldn’t you agree? She certainly brings light to these increasingly dark winter days, we hope you’ll look forward to it! Anyway, on with the manga.

Oh my. This column is supposed to be for discussing good manga, but I hope you’ll forgive for just one second as I talk about Double Taisei chapter 24. Kentaro Fukuda’s series has been on the downturn for a while now after a fairly solid start, but this chapter goes totally off the rails.

By now, it’s quite clear that author Kentaro Fukuda has kind of given up. He chooses to rush through the process of selecting the new wave of shogi professionals (you know, the core narrative of the series) in a matter of pages, only to suddenly announce that there are going to be playoffs because all of those in second place have tied. It’s all very rapid-fire and quite confusing, but I can live with it. 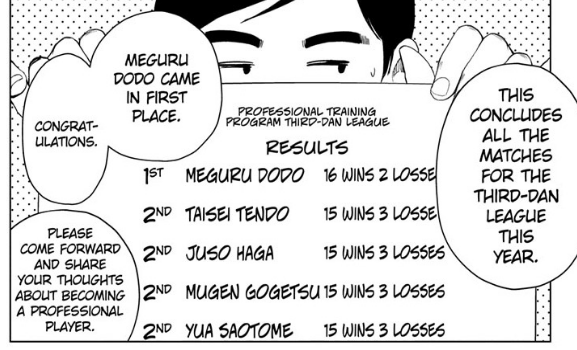 What pushed me over the edge with regards to this chapter and the series as a whole was the way that Double Taisei chapter 24 bows out. Taisei heads to his match with the ‘unique’ Haga, whereupon he’s greeted with perhaps the most ridiculous monologue I’ve read in recent memory. 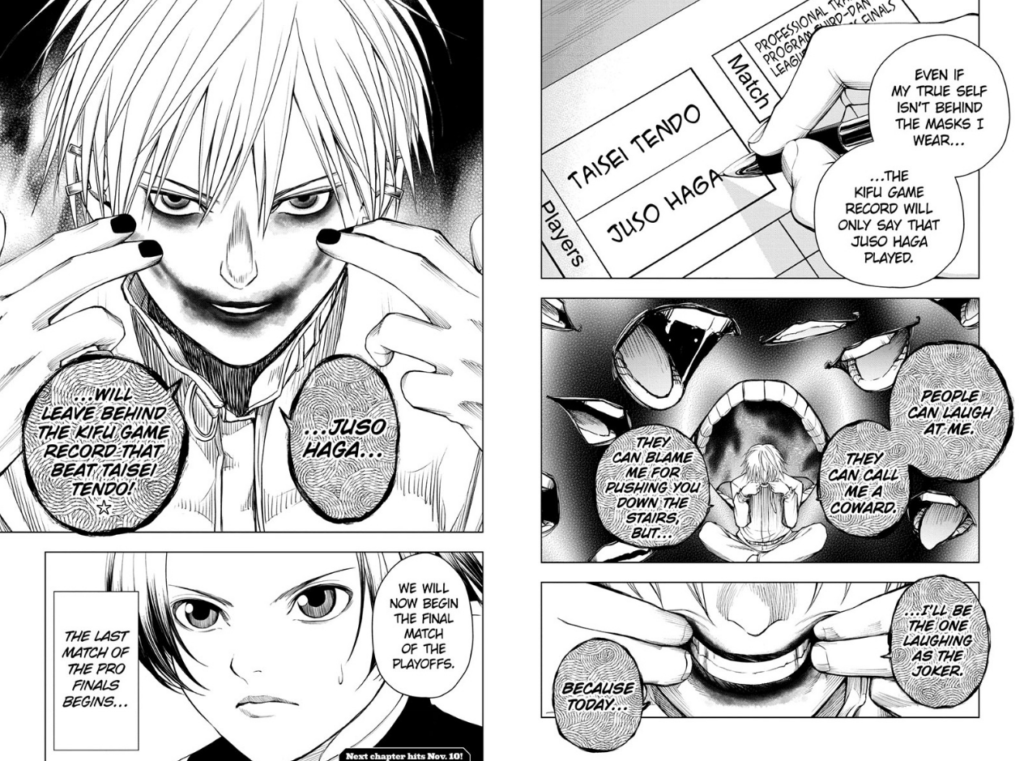 Haga’s monologue is so ridiculous and so utterly lacking in self-awareness that I honestly can’t tell if this is Fukuda attempting to make us laugh. Double Taisei has always had a strange sense of humor – Haga has spent most of his time in a giant paper bag, after all – but chapter 24 has well and truly gone off the rails. The way that it apes the character of the Joker so close to the release of the Joker movie, in turn, only has me cringing even further.

I used to think that Double Taisei was a tragedy, but now I realize – it’s a comedy. Let’s hope that this series gets canceled sooner rather than later and Fukuda can be set free…

In much more positive news, Mission: Yozakura Family continues to prove its merit in the pages of Weekly Shonen Jump in much the same way as it did last week – combining family dynamics with inventive action. This time, however, we’re gaming.

Mission: Yozakura Family chapter 11 is yet another seemingly episodic story that focuses on the relationship between our main character, Taiyo Asano, and another member of the titular Yozakura family. This time, he’s hanging out with his super hacker and epic gamer sister-in-law Shion. 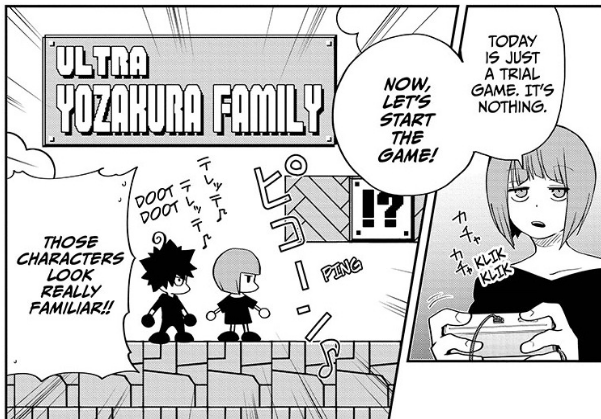 As if playing games with your family wasn’t wholesome enough, author Hitsuji Gondaira piles on the humor this chapter to make for a chuckle-worthy little escapade.

This humor mainly stems from the enemy sprites that Shion has made for her custom game, which resemble their sadistic older brother Kyoichi, as well as the realistic fight animations that don’t gel at all with the classic, retro aesthetic. 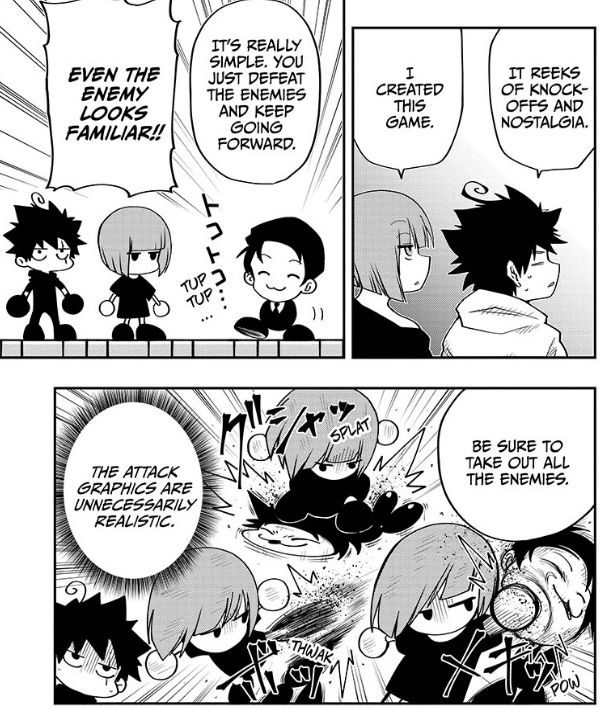 The events of Mission: Yozakura Family chapter 11 aren’t just a game, however. As it turns out, this game is actually the way that Shion hacks systems and servers, with the enemies symbolizing the system’s security protocols and the player’s progress directly feeding into the success of the mission.

Not only does this act as a great visualization of hacking (if a little ridiculous), author Gondaira then uses this narrative device to raise the stakes of Mission: Yozakura Family chapter 11 just a little bit, as Shion and Taiyo have to work together to avert a terrorist attack by a madcap environmentalist group.

This transforms the relatively innocuous slice-of-life fluff into tense espionage action in one fell swoop, especially as the two family members have to think themselves out of a potentially sticky situation for the mission’s success. In general, Mission: Yozakura Family chapter 11 acts as yet another testament to the series’ continuing excellence – here’s hoping that Gondaira can keep up the pace.

SPY x FAMILY Short Mission 1 (chapter 15.2 on VIZ’s website) brings us a story told through the eyes of Anya, the adorable infant esper, who is playing ‘spies’ with her stuffed toys. Ostensibly, her lion teddy ‘Director Chimera’ is taking their new recruit ‘Penguin’ for a tour of their secret agency – the Foyer family household. 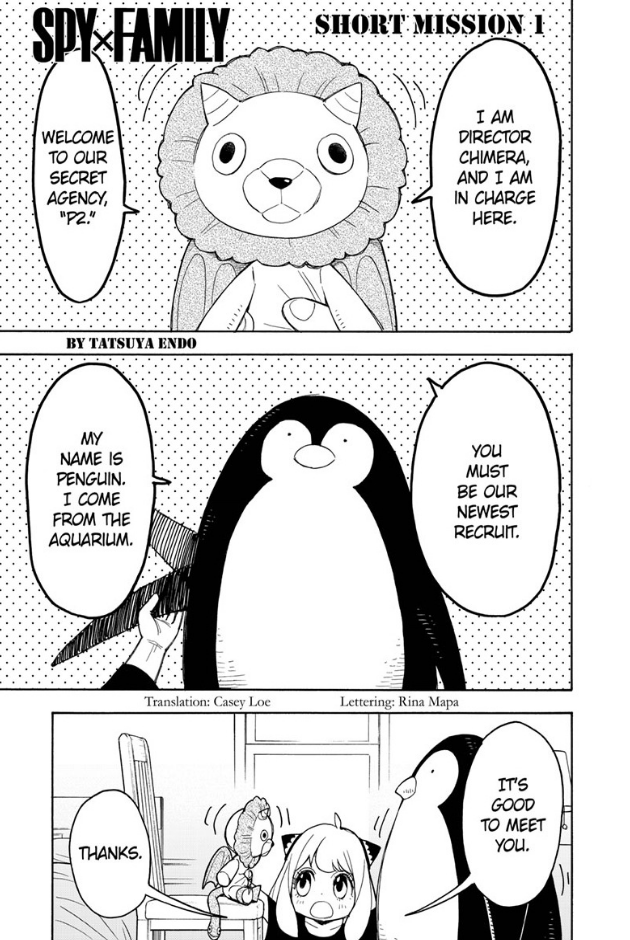 It’s absolutely adorable to see Anya’s imagination at play as she shows the newly adorned ‘Agent Penguinman’ around the living room (the ‘control room’), her room (where she does her ‘daily training’), as well as introducing him to the TV set (where they get ‘intel’ from) and her mom and dad (‘Agent Papa’ and ‘Agent Mama’). 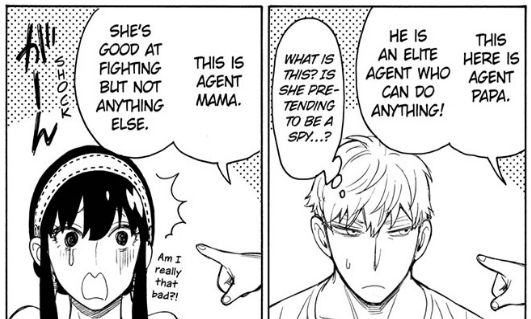 Trying to take Penguinman into Lloyd and Yor’s room, however, is promptly forbidden by Lloyd and Yor, who keep the tools for their secret professions as a spy and an assassin respectively hidden. This greatly upsets Anya, so Lloyd tries his best to cheer her up by joining in with her antics –  ending up on the streets of the city in a very embarrassing and very conspicuous situation. 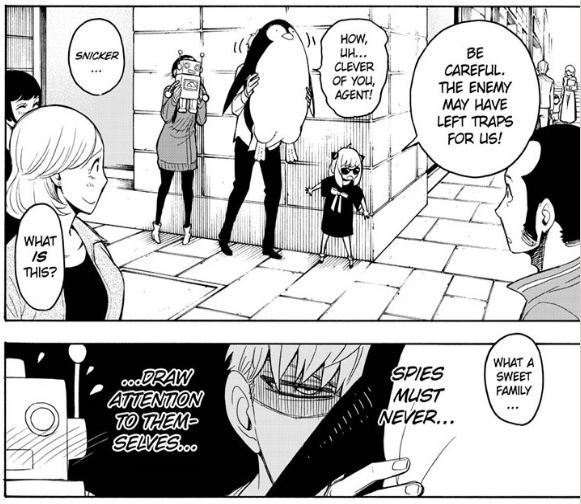 SPY x FAMILY Short Mission 1 may be short, but it’s no less entertaining and no less worth checking out. Special credit must also be given to translator Casey Loe this time around, who’s translation of Anya’s dialogue into more childish English really helps to sell so much of the heartwarming humor.

As an aside, it’s interesting to see how much extra material Tatsuya Endo is putting out for SPY x FAMILY recently. It was only two weeks ago that he penned the ‘Extra Mission’ side chapter for Weekly Shonen Jump, and now he’s given us another, albeit shorter side story.

With regards to SPY x FAMILY Short Mission 1, it seems as though this is a way to keep up the fortnightly release schedule while also giving the author a bit of a break. The next chapter is due on November 17, meaning that SPY x FAMILY Short Mission 1 has taken the place of a regular chapter this time around. That’s not really a problem, but just interesting to note – let’s hope that there’s nothing seriously wrong, and things will be back to normal fairly soon.