Attack on Titan Chapter 123: Beginning of the End – Your Manga Week #6 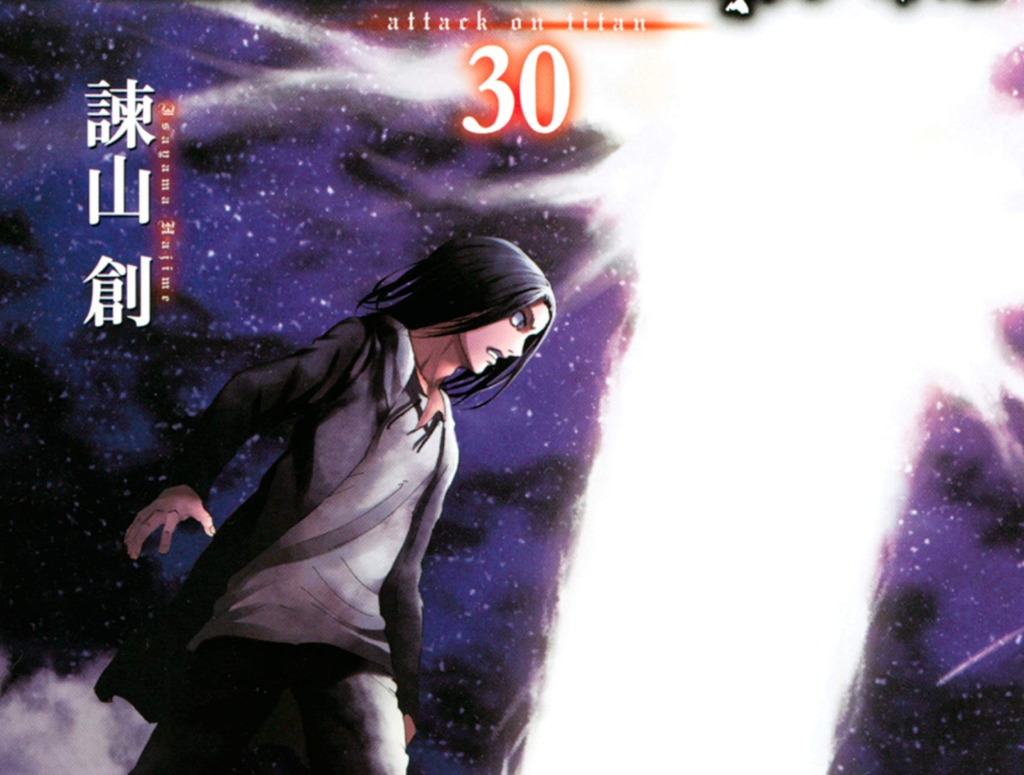 Hello there, and welcome to Your Manga Week. Finding time to keep up with all the manga that releases each week can be difficult, so I’m here to tell you what’s worth your time and what’s not. We’ll also be discussing the story and arc developments as they come. This week, we’re chatting Attack on Titan chapter 123, Dr. STONE Reboot: Byakuya chapter 3, and Mitama Security: Spirit Busters chapter 12.

This week I discovered the power of Amazon Global Priority shipping. I ordered a load of Naoki Urasawa manga on Tuesday evening, including two volumes of his new series Asadora!, along with some academic textbooks and it was all delivered to my house in the UK by Saturday. Isn’t that crazy? Only four days for a book published in another language and in another country to make a trip halfway around the world? All without me lifting so much as a finger? I know I’m a 21st-century kid, but stuff like that still amazes me. It certainly makes being a fan of foreign media very easy. Anyway, on with the manga.

Truth be told, I thought that last week’s column would be covering the highly anticipated chapter 123 of Attack on Titan, but it turns out that I had my dates all wrong. Kodansha’s Bessatsu Shonen Magazine releases on the ninth of each month, not the fifth – I’ll try to keep that in mind going forward.

When we last left off with Hajime Isayama’s rapidly concluding series, things seemed pretty hopeless. Eren revealed that his true intentions were not aligned with the euthanasia plan of his older brother, Zeke, but in favor of triggering the ‘Rumbling’ and exterminating the entire nation of Marley.

Attack on Titan chapter 123 sidesteps this issue just a little bit, at least towards the beginning, as we open on a flashback to the Survey Corps’ initial expedition to the mainland to gauge international support for the plight of the Eldians. 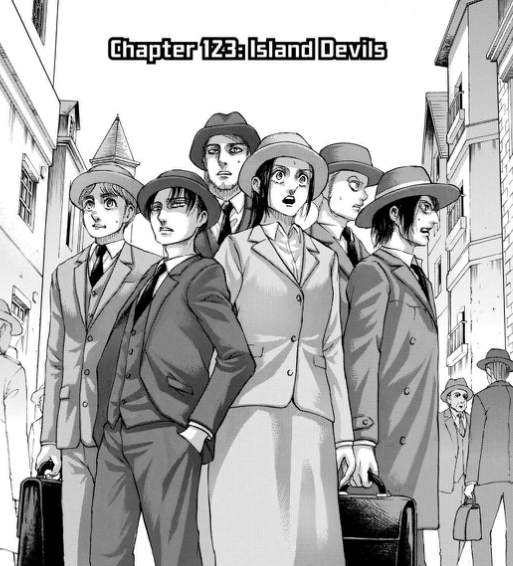 Yet, even this flashback isn’t entirely without merit. In fact, it fills in a very conspicuous narrative blank spot between the Return to Shiganshina and Marley arcs as to how Eren was set down the path of righteous vengeance in the first place.

Attack on Titan chapter 123 shows us that hatred of the Eldians on an international scale, demonstrated as the Survey Corps attend a summit on the Eldian issue, was what convinced Eren (at least, in part) that the idea of reconciliation was hopeless. As Mikasa puts it in her animation, it was from that moment onwards that Eren had truly left ‘their side.’ 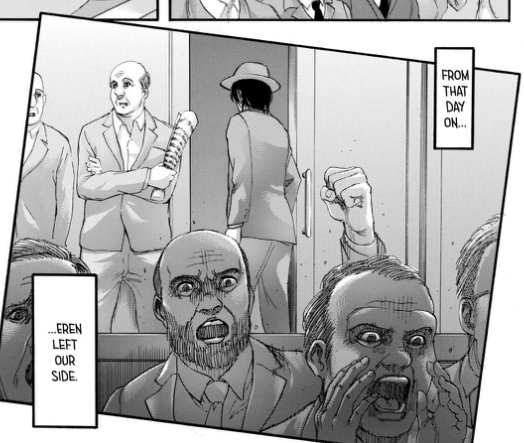 This all seems to suggest that Eren is well and truly convinced that the Rumbling is the only way to liberate his people, however terrible it’s fallout may be. Yet, the more tender moments of Attack on Titan chapter 123 demonstrate that this might not be the case. Despite being more or less convinced of the necessity to exterminate the Marleyians, Eren parties in solidarity with some displaced refugees and engages in an emotional heart to heart with Mikasa, showing that there might still be some good left in his heart. 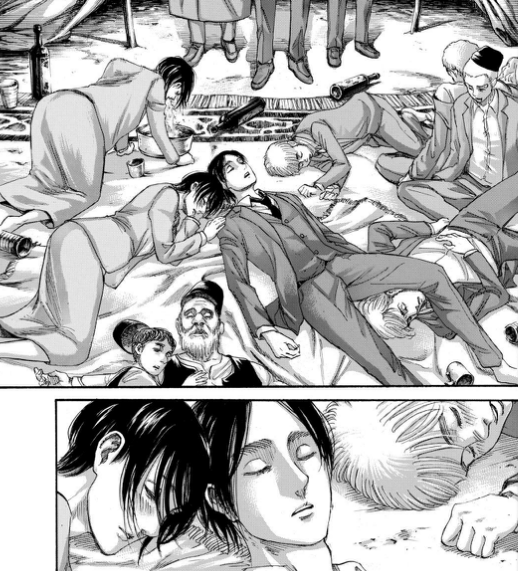 We should keep all of this in mind as the rest of the chapter shows the chaotic, thoroughly apocalyptic unfolding of the Rumbling, as all of the mighty walls that once kept the Eldians safe from the Pure Titans now transform into Colossal Titans – the Founding Titan also forming as a massive skeleton from Eren’s decapitated body.

Certainly, Armin and Mikasa seem to think that Eren’s intentions are not so twisted as they seem. Indeed, the entire question of who Eren really is and to what extent he has been set down the path of evil, or at least pragmatic destruction, has loomed over this entire arc. Even as Eren himself declares that he will eliminate “all of the lands beyond this island” towards the end of the chapter, there’s still some uncertainty as to how Attack on Titan will truly end.

It’s strange to think that while I was so excited about the possibilities of this new Dr. STONE spinoff back when it launched, it has yet to make a feature in this column. I suppose it’s still early days yet, but there has been a genuine problem in finding something worth talking about – most of the chapters thus far have mostly been rehashes of the story as it was presented in the original manga, albeit with some small changes.

Dr. STONE Reboot: Byakuya chapter 3 changes all of that. We finally get our first real departure from the original manga as the original character of Rei – Byakuya’s supercomputer robot AI – gets a chance to shine.

I’m not just talking about it being used to calculate the ISS crew’s route back to Japan, either. Dr. STONE Reboot: Byakuya chapter 3 also shows off the robot’s amusing personality, as it lacks common sense. There are quite a few amusing situations that stem from this, including one moment where Rei calls Darya one thousand years old. Ouch. 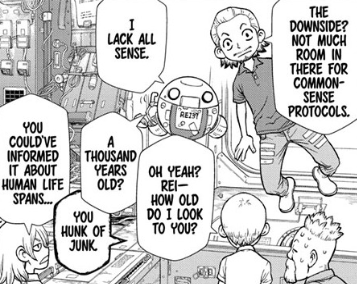 We also get our first taste of the real potential of this spinoff in Dr. STONE Reboot: Byakuya chapter 3, as Boichi starts to expound upon how the petrification affected the world in the immediate aftermath.

Obviously, in the series itself, we get a lot of explanations as to how the petrification affected the world 3721 years in the future. But it’s an equally interesting prospect to see how the cataclysmic event affected the world in the short-term, as thermo-electric power stations burn down without anyone to manage them and the world goes dark for the first time in thousands of years. 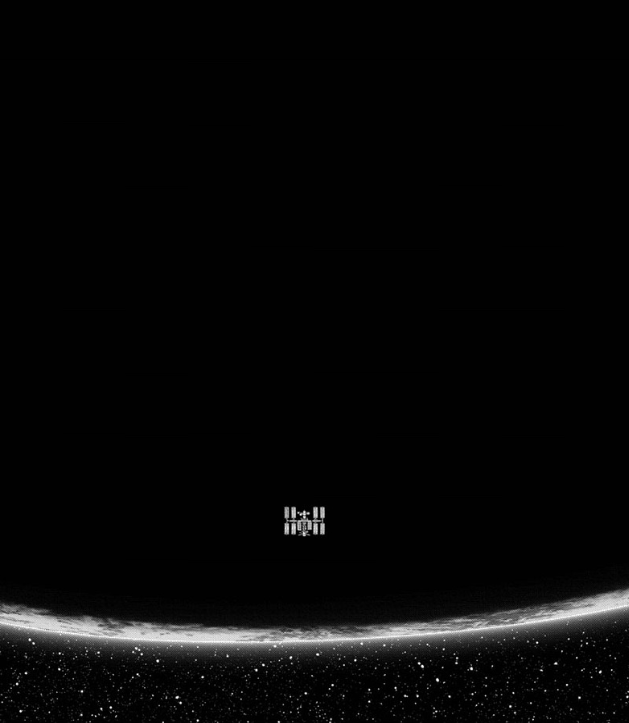 There’s real emotion in this for the reader and the characters themselves, as we see the depressing loss of technology and civilization unfold before our very eyes.

Emotions run even higher in the latter portion of the chapter, as Lillian and Byakuya have a heart to heart. Byakuya explains his conflicting emotions surrounding the fact that this may very well be the last time that humanity goes into space, and Lillian responds in turn with a rendition of the iconic Japanese folk song ‘Tsubasa wo Kudasai’ – providing some hope to this otherwise desperate situation. 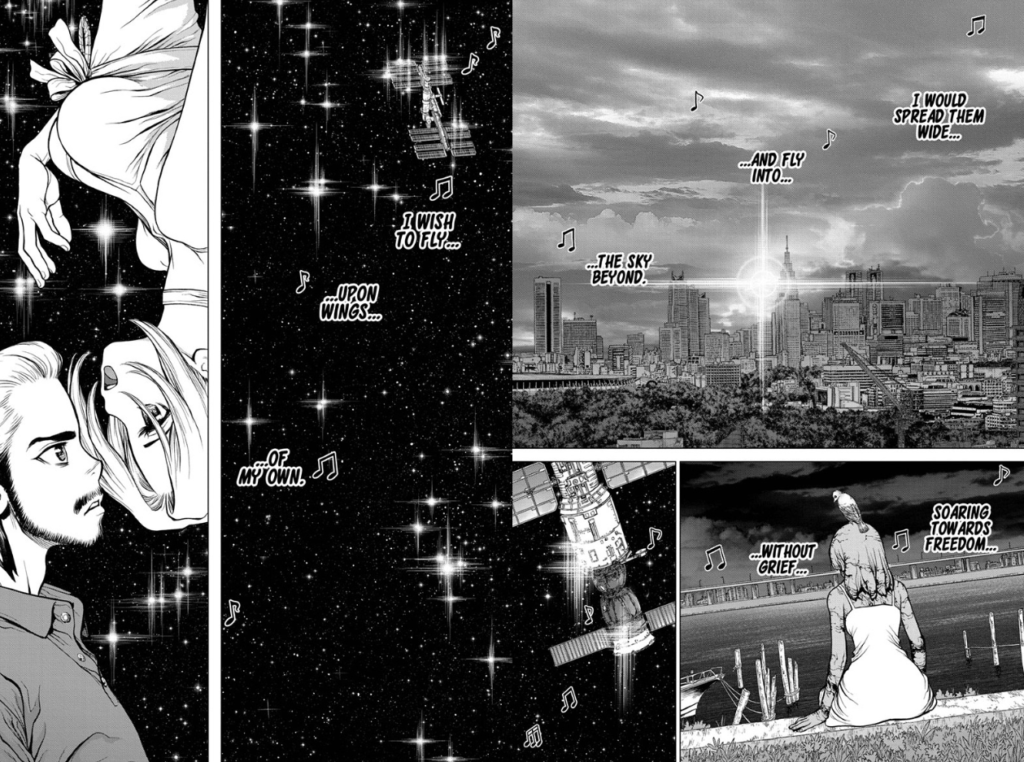 The way that Dr. STONE evokes a real palpable sense of emotion through its love of science and technology is entirely unique and was what drew me to the series in the first place nearly two years ago, so it’s encouraging to see that Boichi can replicate this without the help of Riichiro Inagaki.

As the crew finally make their landing on Earth at the end of Dr. STONE Reboot: Byakuya chapter 3, I hope that this spinoff series continues to deliver more original content going forward. I fear that my love for the main series – the latest chapter of which was brilliant, by the way – gives me a slightly rose-tinted outlook, allowing me to forgive the fact that it is largely retreading tested ground. Dr. STONE is just good, guys.

Let’s finish up this week’s column on a more light-hearted note. Seeing Mitama Security: Spirit Busters go from my least favorite series in Weekly Shonen Jump to my most anticipated each week has been surreal, but all of that is just a testament to how much author Tsurun Hatomune has improved his storytelling.

Mitama Security: Spirit Busters chapter 12 is no exception. In fact, Hatomune hits on a rare emotional note this week as he explores Mitama’s past, signaled last week by the arrival of his mentor and teacher, Mr. Stripe.

As it turns out, Mitama is not unlike his client, the high schooler Rena Haze. He also once had a long line of spirits following him, which may or may not be why he feels so strongly about protecting Rena. 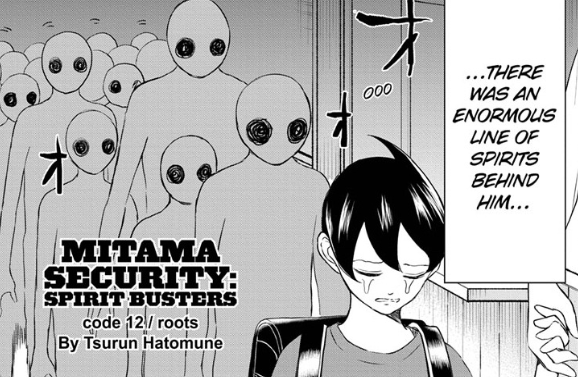 Following on from this, we get to see how Mitama overcame his fearful and timid disposition to become a spirit buster, albeit a very dysfunctional one.

This was all due to the intervention of his teacher, Mr. Stripe, who took personal responsibility for the education of young Mitama once he saw how hard he was trying in his studies despite being ostracized from the other students due to the number of spirits following him – entailing a Mr. Miyagi-esque training sequence with some of the most bizarre regimens possible. 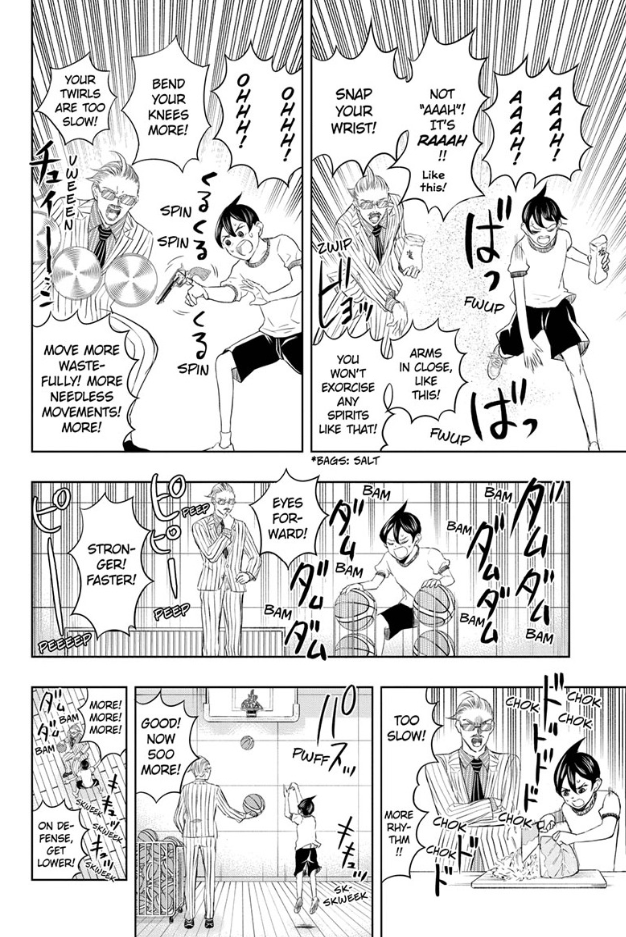 While there’s an emotional component to all of this, we mustn’t forget that this is, first and foremost, a gag manga meant to make you laugh. So, in terms of comedy, Mitama Security: Spirit Busters chapter 12 succeeds fairly well.

Mr. Stripe’s training is ridiculous enough to elicit a chuckle or two, but the real stinger comes right at the end of the chapter as Hatomune inserts a little bit of meta-humor – Rena remarking that Mr. Stripe ‘rushes the ending’ to Mitama’s backstory, but also tying back to the actual circumstances of the chapter at the very end as Mitama’s mentor tells the two to ‘play basketball.’ 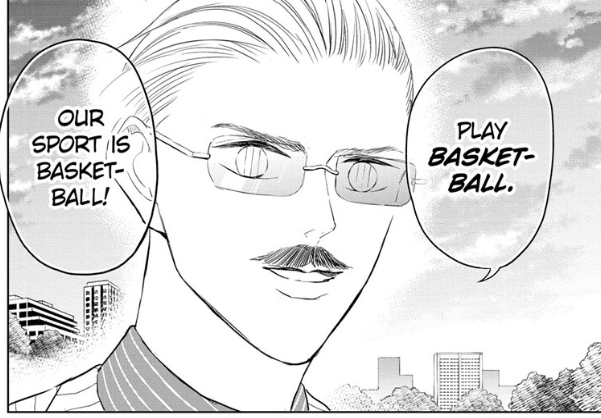 What makes this final gag of Mitama Security: Spirit Busters chapter 12 so amusing is that so much of the chapter is spent ignoring Hatomune’s set-up at the end of last week, diving instead straight into Mitama’s backstory.

Inserting this final admonition of the actual context of the flashback scene thus feels like a wink to the audience on the part of Hatomune, who might have genuinely forgotten to link the past to the present in this chapter until the very end. Regardless, it did make me laugh – and that’s the point, right?

One final thing: it seems like Mitama Security: Spirit Busters chapter 12 might mark the end of the more structured approach that Hatomune has been taking since around chapter 6, as there’s no big reveal to lead into next week. There is a little panel of Rena saying that she’s ‘curious’ about secureity now, but it seems largely incidental.

When Mitama Security first embarked on this more structured path, I was ensured as to whether that’d be a good thing or not for the series. Thankfully, it seems like it hasn’t had much of an effect on the story – if anything, it’s made it better. So, no matter the approach that Hatomune might take in the future, I’ll certainly be supporting him.