Hello there, and welcome to Your Manga Week. Finding time to keep up with all the manga that releases on a weekly basis can be difficult, so I’m here to tell you what’s worth your time and what’s not. We’ll also be discussing the story and arc developments as they come. This week, we’re chatting Dr. STONE chapter 130, Yui Kamio Lets Loose chapter 35, and SPY x FAMILY chapter 16.

What’s your worst nightmare? Mine is waking up in the morning and not being able to take a shower. It ruins my mood and ability to focus for the entire day, which is unfortunately what happened to me this morning. Hence why I apologize if the column this week is a little more curt than usual – no one likes being stinky. Anyway, on with the manga.

We started this week with the news from Anime NYC that Dr. STONE would not be ending any time soon, disproving many of the claims that I have made in previous editions of this column. Nevertheless, I couldn’t be happier. Not only am I not prepared to bid the series adieu, but things have really been ramping up in recent weeks – bringing us to this week’s Dr. STONE chapter 130, where things are really on a knife-edge.

Dr. STONE chapter 130 picks straight up from chapter 129’s nail-biting conclusion, where Senku and friends had no choice but to revive their fearsome enemy Hyoga in an attempt to save themselves from the converging forces of Treasure Island. 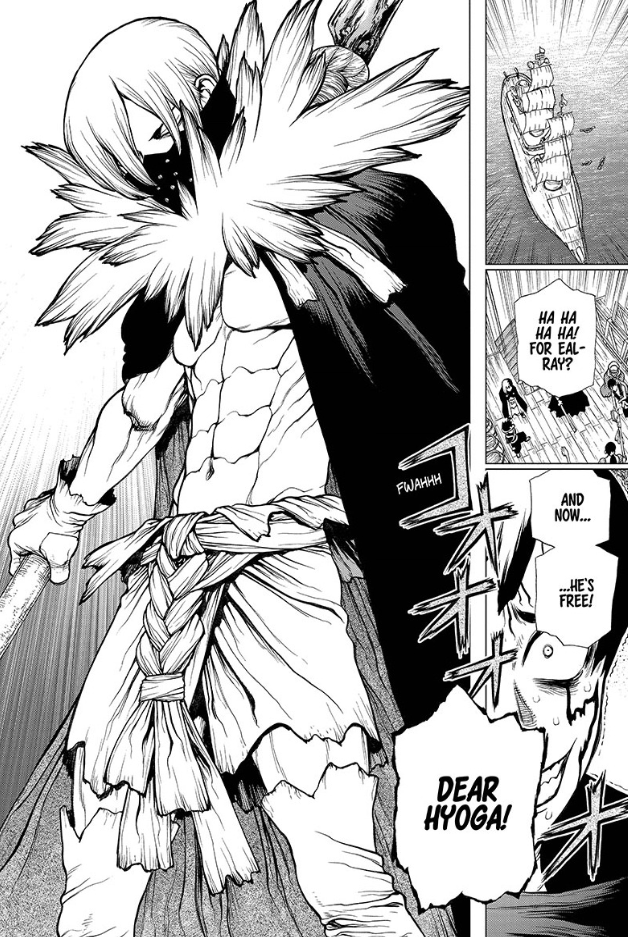 Last time we checked in with Hyoga, he was plotting to kill both Tsukasa and Senku and take power for himself, so it’s safe to say that he’s a bit of a wildcard. The question of whether or not Hyoga will choose to help Senku and friends out of the pinch in which they’ve found themselves by taking on the equally fearsome Moz, therefore, looms over the events of this chapter and creates a fair bit of tension.

At the same time, Minister Ibara is scrambling about the ship, having realized the Kingdom of Science’s plan to reassemble the petrified corpse of the island’s leader and use it to sway his troops. It is, therefore, with pleasure that he sees the arrival of Kirisame, signaling the withdrawal of the last of his troops from the island and making clear that now is the time to carry out his plan to petrify the entire island. 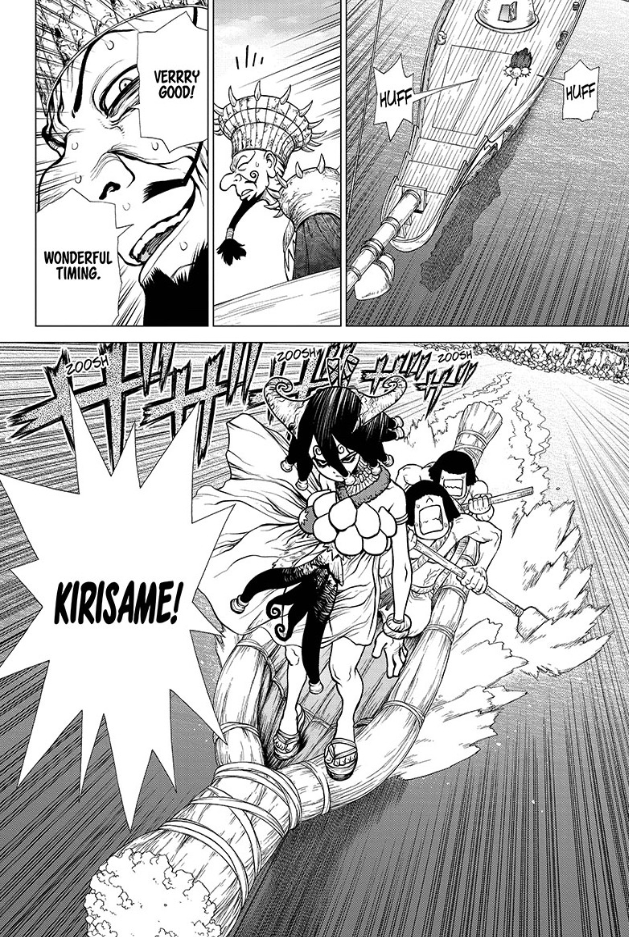 Not far behind them, however, is Taiju, Yuzuriha, Suika, and Soyez, who have finished putting together the petrified corpse of the island’s master and are promptly making their way to the ship. They don’t get far, though, before a mysterious light stops Taiju in his tracks in a diminutive, blink-and-you’ll-miss-it panel – what on earth is going on?

This means that, even when Hyoga inevitably joins the side of the Kingdom of Science and begins to beat down Moz, Dr. STONE chapter 130 has set up so many questions and new narrative elements that the whole thing is balanced on a razor-thin knife-edge. Will the Kingdom be able to sway Moz’s troops? Is Hyoga truly on the side of Senku? Has Ibara succeeded in his plan? What was the mysterious light that shocked Taiju? Needless to say, I’m quite stoked for next week.

Or, I would be, if there was a chapter next week. That’s right – in exchange for their panel at Anime NYC last weekend, Boichi and Riichiro Inagaki have been forced to take a one-issue break. Was it worth the sacrifice? I honestly can’t make up my mind.

Ah, Yui Kamio. How far you’ve come. What was once a simple 90s-inspired love comedy just a few months ago is now a full-blown supernatural battle manga. You may be getting canceled soon, but it’s hard not to appreciate your tenacity.

Despite the impending fate of Hiroshi Shiibashi’s short-lived series, Yui Kamio chapter 35 pulls no punches. It stands as a testament to how much the story has changed in such a relatively short space of time, as well as to the imagination of the author that it somehow going unnoticed and unappreciated by the audience of Weekly Shonen Jump.

Scarcely has Yui Kamio chapter 35 begun before things are a bloody mess – and I mean that in a literal sense. Kiito is, in his attempt to save Yui from the fearsome ‘Enlightened Boss of Nara’ Asuka Ashuradera, literally cut into little pieces and falls to the floor in a lump of human-shaped lumps. 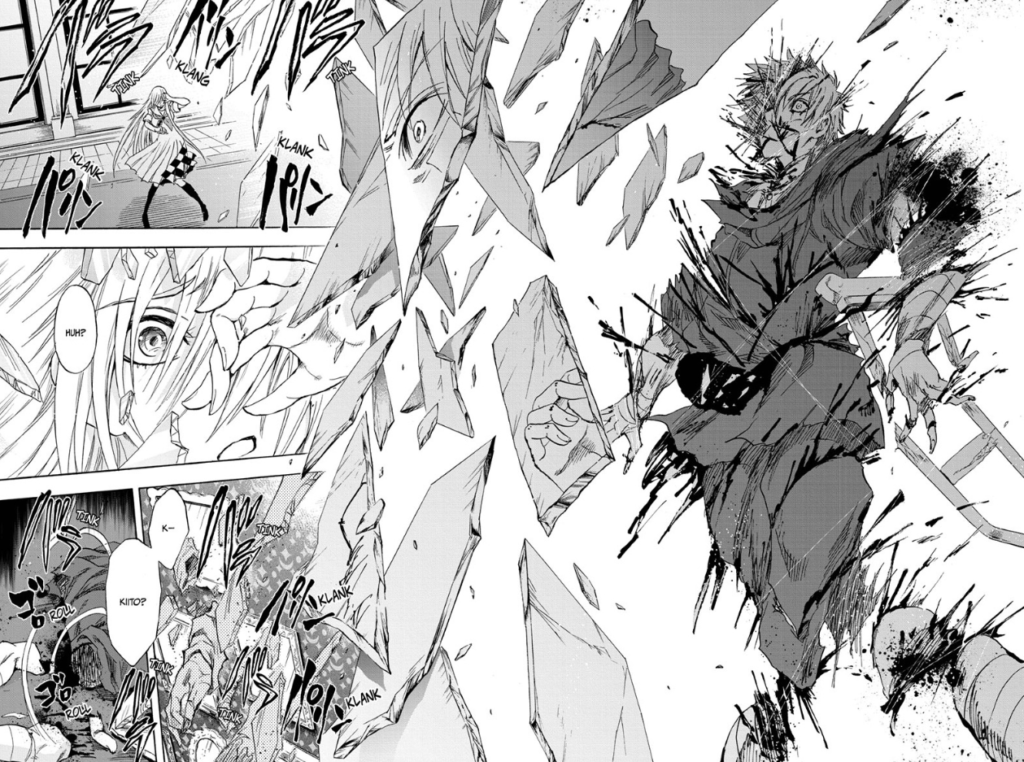 If you’d have shown me this panel when I first started reading the series and told me that this was how things would end up, I would have laughed until the cows come home. Truly, the bloody imagery and dramatic visuals of this scene are a far cry from the series’ humble beginnings.

Kiito’s death turns out not to be as dramatic as it may first seem, as he’s able to revive himself using his magical ‘mushi’ powers, but even this I’m willing to forgive on account of sheer imagination and creative tenacity – Kiito manages to literally pull himself together as his consciousness still leaves, surrounded by pieces of his own body. It’s pretty metal. 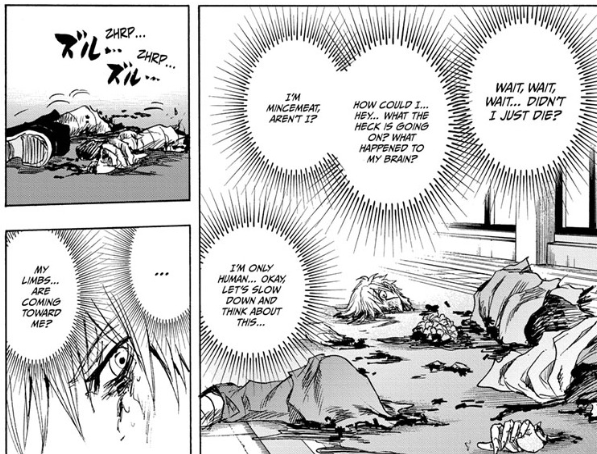 Further intrigue is sown as the girl in the mirror, Asuka Ashuradera, claims that Yui Kamio’s fearsome destructive power, unleashed after the shock from the death of Kiito, will ensure that her reign will continue for “another thousand years.” What this means exactly is unknown, but I’m sure as hell interested in finding out.

There also seems to have been some kind of reconciliation between white Yui and black Yui, as the former transforms into the latter in her rage – suggesting that there’s perhaps a more integral relationship between the two personalities than it may seem.

This seems to spell a definite endpoint one of the two driving forces of the overall plot of Yui Kamio, the other of which – Kiito’s relationship with Yui – is also largely wrapped up in Yui Kamio chapter 35, with Kiito declaring towards the end of the chapter that he loves both halves of her in an adorable confession that’s more than a little grotesque. 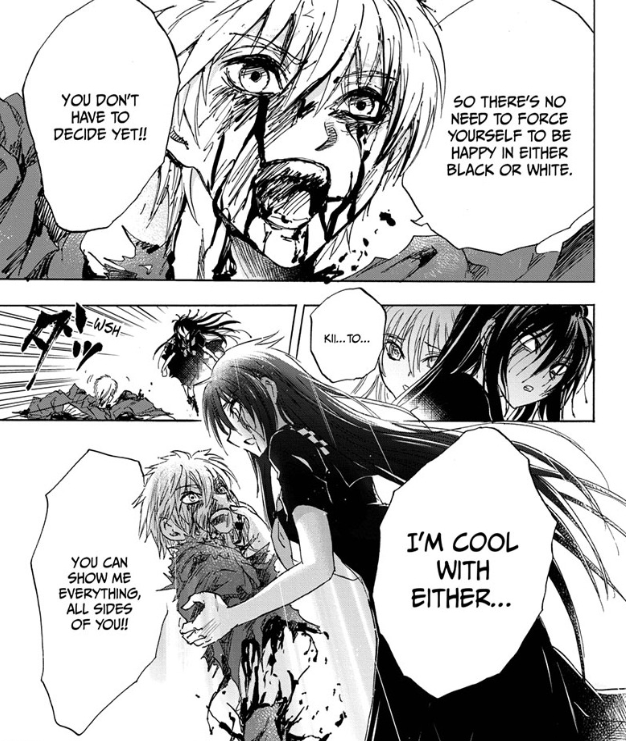 If the leaks of next week’s issue no. 52 of Weekly Shonen Jump are to be believed, then Yui Kamio chapter 35 will be the penultimate of Shiibashi’s evolving series. While many of the key plot points have been largely resolved, it’s a shame that we’ll never get to see that end destination of the ‘Queen Mushi.’ But hey, that’s how the cookie crumbles with serialized media.

One series that’s definitely not going anywhere is Tatsuya Endo’s SPY x FAMILY. This Jump Plus surprise hit has been making waves ever since its debut in March and SPY x FAMILY chapter 16 is a perfect example of why: combining heartwarming comedy with a genuinely suspenseful espionage narrative.

SPY x FAMILY chapter 16 follows the continuing ‘second phase’ of Lloyd’s mission, which consists of gaining Anya entry into the prestigious Imperial Scholar Honor Society by getting her to earn ‘Stella’ stars. Essentially, get to her to be a good student and he’ll succeed.

That’s easier said than done, however. Anya isn’t the brightest at academics, and using her mind-reading powers to cheat might make her stand out, or – even worse – turn her into a social outcast from the cast. Hence why Lloyd has no choice but to use some alternative methods.

First, he tries to get her to excel at sports. But, again, Anya’s isn’t particularly adept at them. She’s no good at drawing, either – there’s a fantastic little exchange towards the beginning of the chapter that sees Lloyd barely able to hide his dumbfounded reaction to his adoptive daughter’s lack of artistic ability. 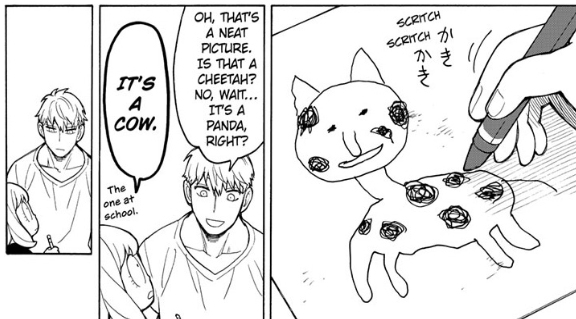 Hence why Lloyd has no choice but to turn to the final method: community service. Both of them volunteer at a local hospital in a bid to do some good for the rest of society, earning Stella stars along the way.

Still no dice, however, as Anya’s hyperactive disposition means that she’s less than suited for looking after others. Lloyd struggles to keep his daughter under control, who chooses to read books in the library instead of tidying them up and knocks over vases while cleaning.

He’s just about to give up when Anya picks up telepathically on a patient’s desperate cries for help as they drown in the hospital’s pool for physical therapy – diving in to save the boy, with Lloyd following close behind. 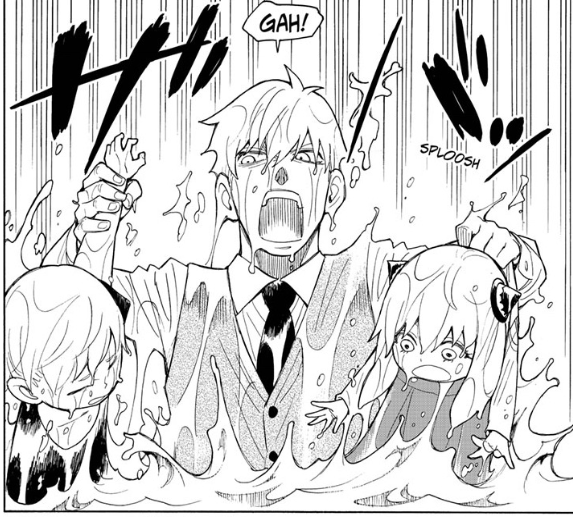 The upshot of all this is that Anya gets a ‘Stella’ star for the good deed of trying to save someone’s life (even if she did require her father’s help). But, perhaps more importantly, the events of SPY x FAMILY chapter 16 demonstrate to Anya that she can use her powers for good – something which she remarks at the end of the chapter. 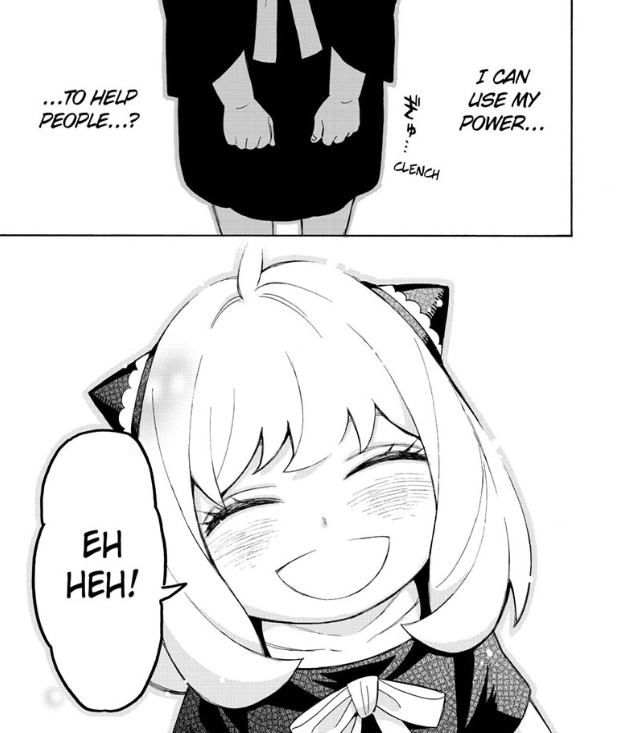 Seeing where this development might take us will be interesting. Will Anya’s disposition as a character change because of this? In what sense will this impact Lloyd’s mission? In light of these questions, two weeks seems like an awfully long time to wait.

Doubly so when you consider that SPY x FAMILY chapter 16 is the first time in a while that Tatsuya Endo has moved the narrative of the series forward in a substantial way. The past month has seen two fun, but ultimately inconsequential chapters in the form of Short Mission 1 and Extra Mission 2. Here’s hoping that Endo can keep up the pace going forward and that he’s not being adversely held back by his editors.