Hello there and welcome to Your Manga Week. Finding time to keep up with all the manga that releases on a weekly basis can be difficult, so I’m here to tell you what’s worth your time and what’s not. We’ll also be discussing the story and arc developments as they come. This week, we’re chatting ZIPMAN!! chapter 1, Chainsaw Man chapter 49, and Dr. STONE Reboot: Byakuya chapter 6.

If last week’s column was all about goodbyes, then the next two weeks will be all about hellos. Yusaku Shibata launched the first chapter of his new manga ZIPMAN!! in this week’s issue no.1 of Weekly Shonen Jump, while next week’s issue no. 2 will also see the start of Nakamura Atushi’s Agravity Boys. That’s not to say that there will be no further farewells, however – not only did Beast Children come to an end this week, but further weeks will see Tokyo Shinobi Squad meet a similar fate. You won’t find a writeup of those series here, though – I’ve long since dropped both of them! Anyway, on with the manga.

I wasn’t really sure what to expect going into ZIPMAN!! chapter 1. I hadn’t read the synopsis, nor did I watch the animated PV put out by Shueisha before diving into the inaugural chapter this Monday. I had seen the various illustrations put out by Yusaku Shibata beforehand, but that only provided me with a slight indication that I would enjoy the new series on an aesthetic level. In any case, I certainly wasn’t expecting to like the series’ opening chapter as much as I did.

ZIPMAN!! follows the story of two brothers, Kaname and Koshiro Tatare, who couldn’t be more different. One is impulsive and intense, lambasted for his scary face, while the other is a personable, altruistic scientist, known the world over. The only thing that unites them is a shared love for the fictional tokusatsu series, ‘Masked Jackman.’ 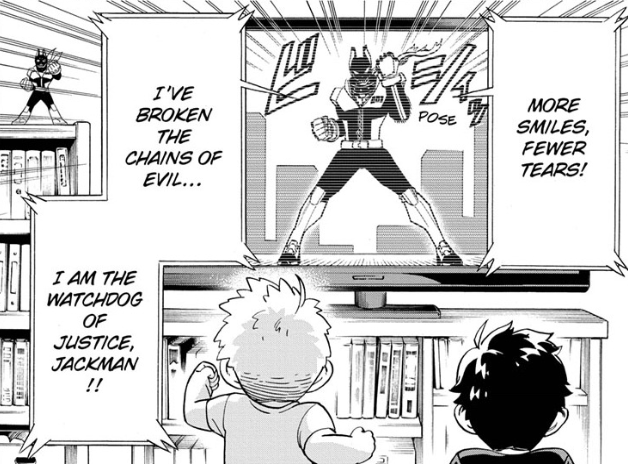 But, one day, Koshiro up and dies in mysterious circumstances. It is some time after this that ZIPMAN!! chapter 1 opens, guiding us through a day in the life of Kaname as he tries to deal with his complicated emotions surrounding his brother’s passing. What makes these emotions even more complicated is the fact that they shared a love interest together in life – a love interest that now enjoys no competition. 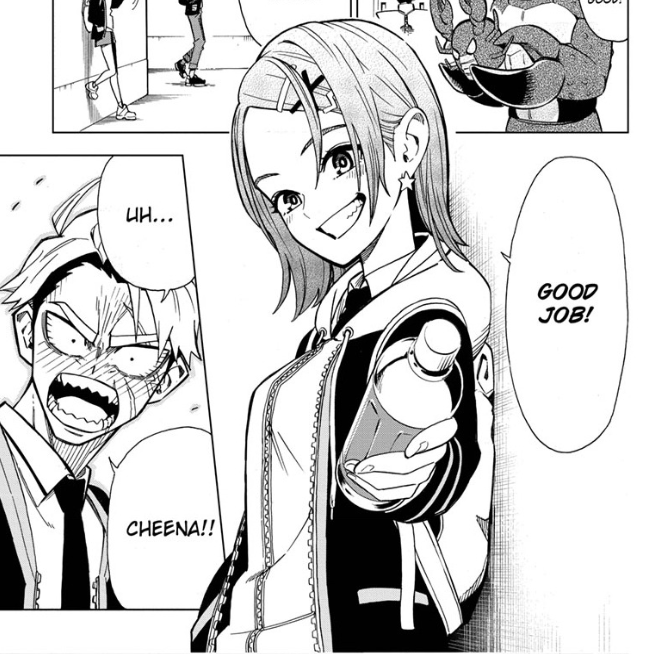 It is the complicated story of two brothers, opposed yet united in so many ways, that Yusaku Shibata sketches in ZIPMAN!! chapter 1 which had me enthralled from page one. My own relationship with my brothers is much the same, albeit less dramatic, so there’s a realness to the characters that is hard to quantify.

Of course, there’s also the fact that the chapter rounds off with a good old slice of tokusatsu action.

As I said, I wasn’t sure what kind of series ZIPMAN!! would be going into chapter 1, so the fact that it is essentially a tokusatsu series – complete with a transformation into some kind of giant mech – took me completely by surprise. But I can’t say that I didn’t enjoy it. It certainly stands out from the rest of Weekly Shonen Jump’s current line-up, especially when My Hero Academia already has the superhero niche effectively covered.

It is with great displeasure that I remember that the last time Weekly Shonen Jump tried anything remotely similar to tokusatsu – 2017’s kaiju series ZIGA. But I doubt that ZIPMAN!! will be quite as muddled and incomprehensible as that series was, if the excellent pacing of this first chapter and the way that Yusaku Shibata has inserted some pertinent narrative questions – how Koshiro died and how he ‘became’ the mecha suit – is anything to go by.

Given this, as well as the fact that the series gave me lots of Big Hero 6 vibes (it’s the dead brother, I think), then it’s safe to say that ZIPMAN!! chapter 1 has the series as a whole off to a great start, and I can’t wait to read more.

Not about to be outdone by the Weekly Shonen Jump new blood, the similarly fresh Chainsaw Man chapter 49 provides us with what might possibly be the series’ most bonkers chapter yet.

The fight between Denji and Reze, the Bomb Devil, continues in earnest, and it seems like Tatsuki Fujimoto is having way too much fun as of late. Not only is the dialogue snappy and hilarious, but the imagery of Chainsaw Man chapter 49 has seemingly gone completely off the rails. A storm formed of a baby’s head and some intestines reminds me of the horrifying imagery of Junji Ito’s Uzumaki more than anything else, the Angel Devil is acting like the Angel of Death, and the instance where Denji rides a shark in the form of Chainsaw Man really needs no explanation. 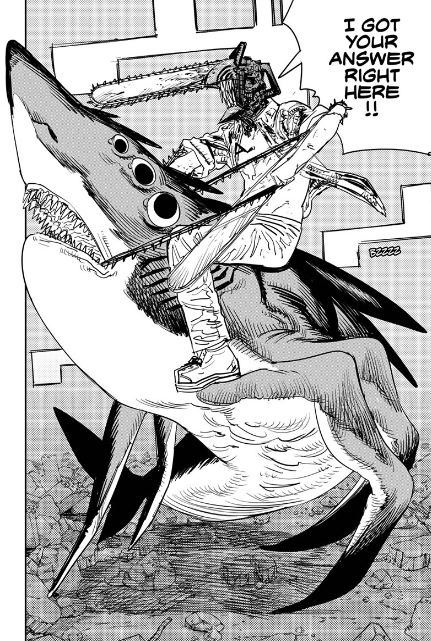 In this sense, Tatsuki Fujimoto is recovering some of the unchained creative energy that was present in his debut Fire Punch but had seemingly been tempered for the more mainstream pages of Weekly Shonen Jump. That’s great news, as Fujimoto is at his best when he is actively pushing the boundaries.

Chainsaw Man chapter 49 also seeks to push the reader’s buttons, as an exchange between Denji, the Shark Devil and the Angel Devil hints at some kind of power upgrade for the titular main character. But instead of taking his fellow Devils’ advice and using his chainsaw chains to climb up buildings like Spider-Man, he just uses them to ride the transformed Shark Devil into battle. Go figure. 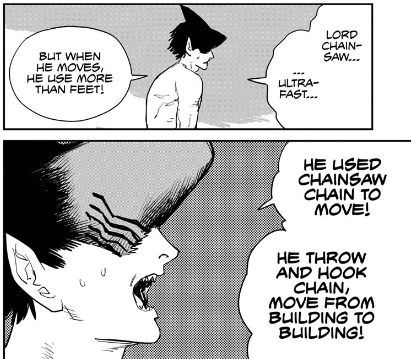 This is obviously a bit of a fourth-wall-breaking joke from Tatsuki Fujimoto, which has never been something he has shied away from. Even so, that’s not to say that we don’t get some genuine narrative and power development in Chainsaw Man chapter 49 – in fact, the chapter opens on Aki testing out his newly received clairvoyance power from the Future Devil on the Bomb Devil. 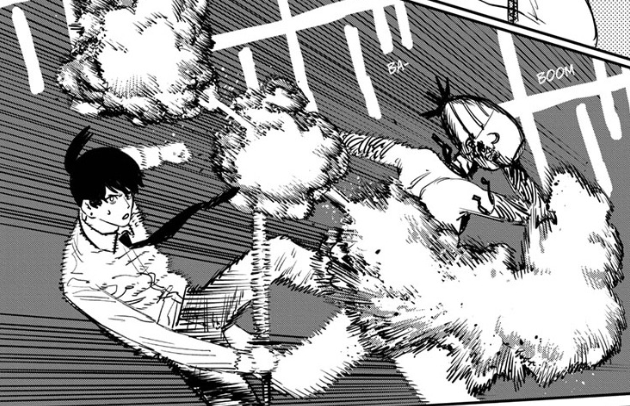 So maybe Tatsuki Fujimoto isn’t going as crazy as it may perhaps first seem. Nevertheless, he seems to be having a lot of fun, and you can really feel that from the grace with which he is able to mix the macabre with the humorous in this chapter. If he keeps this up, then Chainsaw Man is going to be around for a long time yet – never change Tatsuki Fujimoto, never change.

Meanwhile, Dr. STONE Reboot: Byakuya is developing in a very strange direction, as chapter 6 takes a seemingly throwaway comment from the end of last week’s chapter 5 and runs with it – making for some unexpectedly mixed results.

It was at the very end of chapter 5 last week that Byakuya’s robot that he had left in space, Rei, carried out this monologue: 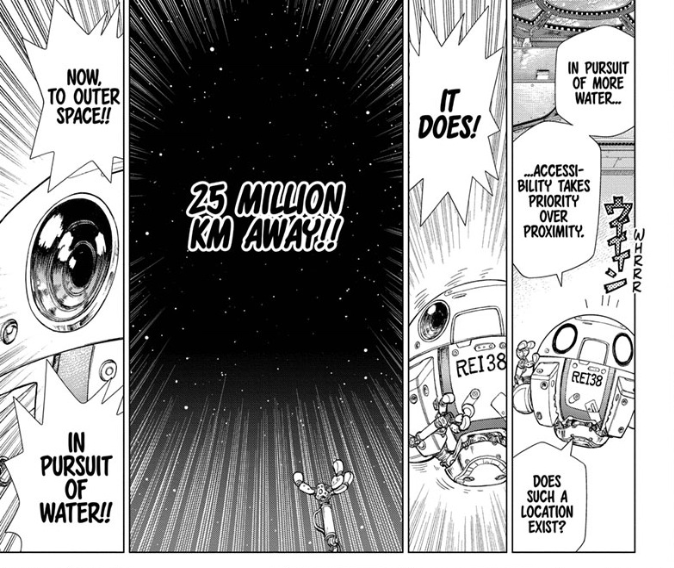 Now, I don’t know about you, but that monologue read more like a joke than a serious indication of where the narrative might going when it released at the end of last week. But Dr. STONE Reboot: Byakuya chapter 6 clearly took it seriously, as Rei sets about on an adventure in outer space in pursuit of a comet that lies 250 million kilometers away. 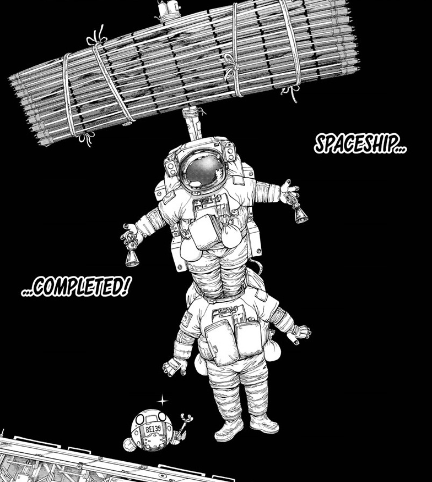 When I first realized that Dr. STONE Reboot: Byakuya chapter 6 would be going in this direction, I was a little confused. Sure, I enjoyed last week’s little adventure – especially since it touched on stories that we hadn’t seen before instead of retreading old ground – but I never expected Boichi to focus on Rei to such a degree. The series is called Dr. STONE Rebbot: Byakuya, not Dr. STONE Reboot: Rei, after all.

Nevertheless, once I got over this initial shock, I was surprised to see that Dr. STONE Reboot: Byakuya chapter 6 has plenty to offer. Seeing Rei solve the seemingly insurmountable problem of crafting a spaceship and traversing the dark emptiness of space was great fun, and there’s some fantastic imagery along the way that ranks among Boichi’s best. 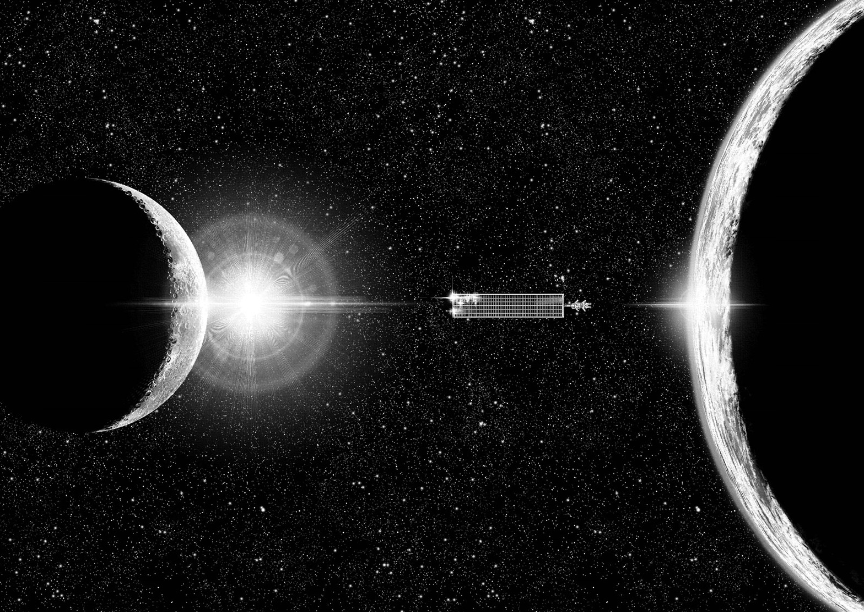 In fact, there’s a real sorrowful beauty to this entire chapter that I can’t help but enjoy. Rei’s isolation from his creator is one thing, but it is when you realize that Rei spent a full three years floating about in the void of space to prepare the space station for his creator’s return, which we know will never happen, that the full weight of Dr. STONE Reboot: Byakuya chapter 6 really hits.

There’s also a real sense of cosmic awe and even spiritual oneness that emanates from the events of this chapter, as it is by chance that sun rays hit the comet and split it so that Rei can bring it back to the International Space Station. Seeing this through the eyes of an unthinking, unfeeling robot only heightens this, as you can’t help but try to feel on Rei’s behalf. 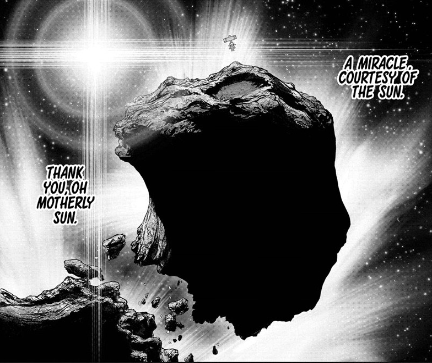 So while Dr. STONE Reboot: Byakuya chapter 6 certainly did not develop in the way that I expected, it was a welcome detour. But that is provided that we’ll be back to Byakuya’s story sometime soon – although Rei’s story has its merits, I’m not sure that I’d prefer it over seeing how Byakuya built Ishigami Village and started up the process of rebuilding human civilization once more. And with the spinoff series only supposed to last around nine chapters, I’m not sure that Boichi has much time left to do that story justice…