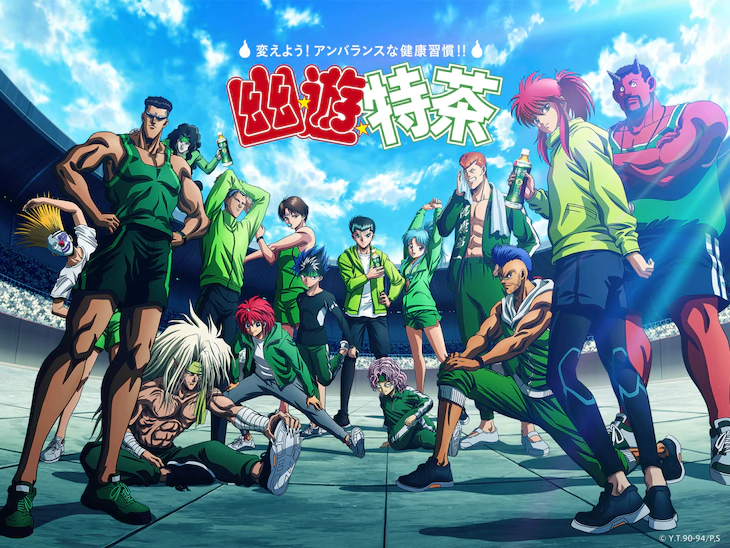 Yu Yu Hakusho is one of those titles that has transcended history as one of the titles to know if you’re an anime fan. Hell, even if you don’t watch anime, you may have heard of Yu Yu Hakusho. Originally starting out as a Weekly Shonen Jump manga in 1990, the series rose to stardom and was adapted into a 112 episode anime series. Starting today, Suntory’s “Tokucha” brand of tea is launching a multi-faceted promotion campaign collaboration with Yu Yu Hakusho to promote healthy living across Twitter and LINE.

The series follows Yusuke Urameshi, a less-than-perfect teenager who was struck by a car, killing him, in the process of him saving a child’s life.  Yusuke is then revived and appointed the title of “Underworld Detective”, with which he must investigate various cases involving demons and apparitions in the human world.

With this collaboration, it will be taking part across two platforms, Twitter and LINE Messenger. The first campaign “Yu-Yu Toku-Chat” will be taking place on the immensely popular messaging app LINE, where characters from Yu Yu Hakusho will engage with fans via AI chat.

Where the second part of the collaboration will take part on Twitter with followers of the official Tokucha account (@suntory_tokucha) receiving health advice from Toguro Otouto by using the hashtag “#今のおまえに足りないもの”. (This translates to “What are you lacking now”, for those who are wondering). By using this, he will ask you a question that you have to respond to and he will further respond with a healthy solution to make your life better and more fulfilling via good health.

The Yu Yu Hakusho and Suntory collaboration is a really interesting marketing concept and something that I can’t say that I’ve seen any other company do before. Not to mention, it’s probably a good time to be promoting good health with the situation that the world is in now with the whole COVID-19 pandemic going on.