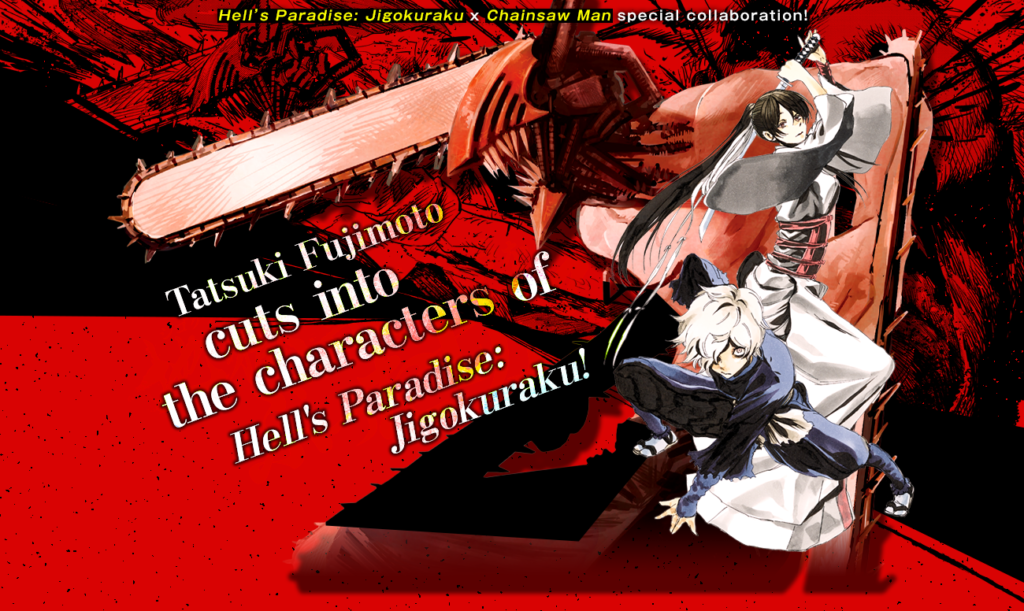 Yuji Kaku and Tatsuki Fujimoto, authors of Hell’s Paradise: Jigokuraku and Chainsaw Man, were recently interviewed as a part of a “special collaboration” for Shueisha’s Manga Plus. While there are many things about this collaboration worth highlighting – including videos of the two authors drawing characters from each other’s respective series – the insights that Yuji Kaku’s interview offered on Tatsuki Fujimoto were particularly useful, as they help to untangle the chaotic mess that is Chainsaw Man.

As it turns out, Yuji Kaku was once an assistant to Tatsuki Fujimoto on Fire Punch, which explains why he knows so much about the madcap creator. With regard to creating characters, Kaku notes that while he would think about “how to convey [his] favorite aspect in the most uncomplicated way,” Fujimoto simply draws out “his favorite things as it is.” This explains why the design of such characters as Power and the Gun Devil are so striking – Fujimoto isn’t taking any steps to dumb down what is in his imagination.

Furthermore, Yuji Kaku comments on Tatsuki Fujimoto’s inspirations. While the two creators share the same taste in movies and such, Kaku brings up such manga Parasyte and Shigurui by Hitoshi Iwaaki and Takayuki Yamaguchi as examples of seires that “take the audience to a place they’ve never seen before” and provide a large amount of inspiration for both authors.

Immediately upon hearing this comparison, something in my mind clicked. The massive shift in Parasyte halfway through, in particular, is very reminiscent of the period through which Chainsaw Man is currently passing; one can only hope that Tatsuki Fujimoto’s story turns out half as iconic as Hitoshi Iwaaki’s.

Yuji Kaku also pointed out the similarities between Denji and Tatsuki Fujimoto himself. Apparently, his crass way of speaking is “completely that” of Fujimoto, and “There are times when Fujimoto-sensei will speak […] exactly the same as Denji.” Fujimoto, for his part, explains why in his interview on Jigokuraku: “I believe that the main character should be similar to the creator. The main character appears the most throughout the story right? That’s why it’s easier to write, if the creator makes their own emotions as the main character’s emotions.”

Finally, Yuji Kaku summed up Tatsuki Fujimoto’s writing style perfectly when he said that “the gag element of a character is the driving force of the story.” Much like Fire Punch, Chainsaw Man can be summed up very simply as ‘the manga where the man is a chainsaw,’ but there is a beauty in such simplicity. One can only hope that the two creators continue to push each other to even greater heights.

You can read Jigokuraku and Chainsaw Man for free via Manga Plus.