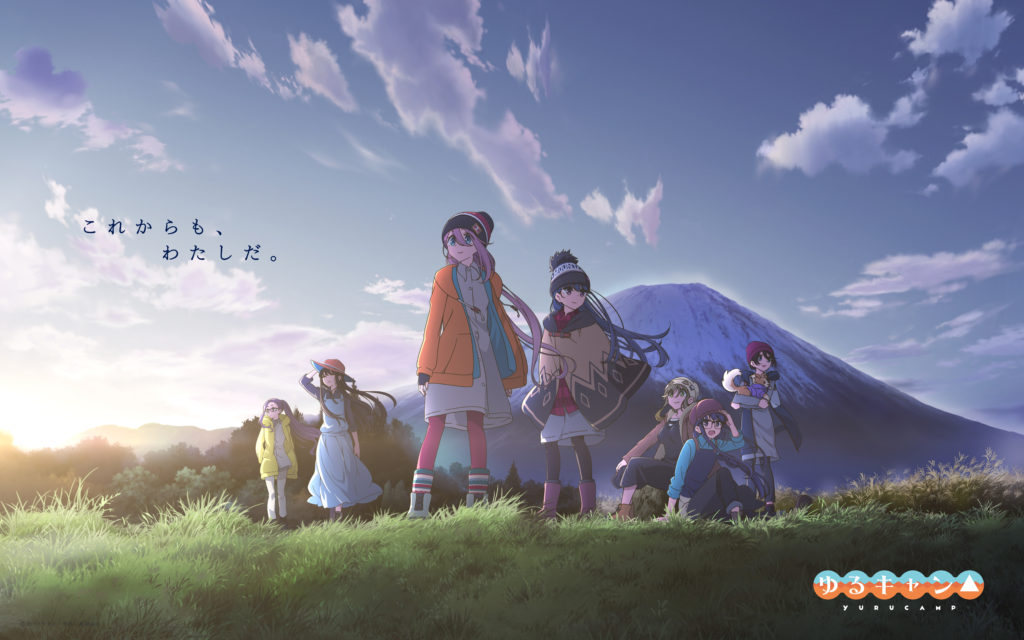 It’s been over a year since the Yuru Camp (Laid-Back Camp) anime aired, which took the anime community by storm with its cute and comfy iyashikei vibes. The momentum surrounding the series hasn’t faded one bit since then, with the short anime Heya Camp (Room Camp) set to air next year. Given this, the series is looking to firm up and establish its identity as a sprawling, multi-work franchise with a new, unique “series key visual.” You can check it out below:

Featuring the five main girls, as well as the two supporting characters of Nadeshiko’s sister Sakura and the drunken Toba-sensei, it’s altogether an excellent image that perfectly captures the calm, soothing spirit of the series. It also makes for an excellent desktop background – something I’d wager the team behind the visual knew very well, as they provided the image in a ridiculously high resolution on the series’ official website.

On the image, there is also some text that reads “Kore kara mo, watashi da,” which can be loosely translated to “From now on, I’m me.” I’m not quite sure what this actually means, but when taking the imagery together with the comment attached to the image on the official website reading “Together with the sunset, a new story with Nadeshiko and the others is starting,” you could quite easily see this as a visual representation of the Yuru Camp series entering confidently into a new phase.

This confidence is definitely warranted. Hype for the series hasn’t calmed down one bit, going by the numerous special projects and tours organized by the series. Publishers Houbunsha are also so confident in the series’ success that they’ve launched an entirely new digital manga app with it as the centerpiece. Furthermore, the series has not one, not two, but three additional anime projects on the horizon – a second season, a theatrical movie, and the new short anime Heya Camp, set to air next year.

Indeed, this new series key visual was actually released alongside new information for the upcoming Heya Camp. But as much as I’m excited to see more of the series, the staff list for this new short anime does raise some concerns. Only the character designer from the first season is returning for this one, meaning that the style of this new show stemming from the production staff could be quite different.

That being said, it’s still unknown what kind of anime Heya Camp will be. Given that it’s a short anime, I wonder if it’ll have a different style from the first season, and different staff members do suit different types of shows. Yet the series’ clear plans for expansion do leave me with some key questions and more than few worries. I suppose we’ll just have to wait until January next year to see if those were warranted, after all.