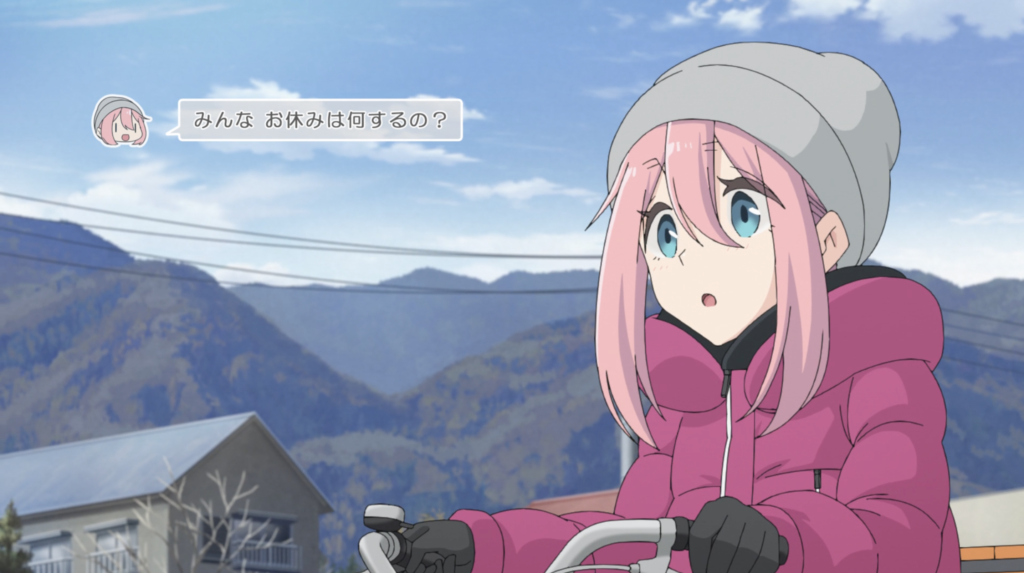 How do you incorporate text messaging and internet communication into a story? It’s an issue that media around the world has fumbled with for over two decades with very few success stories. I recently stumbled across two pieces of work that highlighted the dos and don’ts of texting in visual media. Texting needs to be as expressive as your dialogue, and my recent introduction to Laid-Back Camp (hereafter Yuru Camp) turned out to be the answer to this conundrum.

To understand why Yuru Camp works, you have to understand what doesn’t work. Sundance Film Festival kicked off at the end of January from 28 January until 3 February, bringing with it world premieres for the biggest independent films of 2020. One of these was a modern re-imagining of Romeo and Juliet, titled R#J, retelling Shakespeare’s play through social media and phone screens. It’s a risky proposition attempting to translate one of the world’s most iconic love stories into text messages and video calls, and it ultimately falls flat.

There are other issues with the film, such as its confusing mix of Olde English and modern slang among numerous tonal issues, but the film falls apart when it fails to convey the romance of Romeo and Juliet. Where we should feel adoration between these star-crossed lovers of Capulet and Montague, we instead stare at a screen waiting for a text message to arrive that’s met with silence and a wordless response. Where there should be sparkling love, we instead have a sterile digital landscape where little attempt has been made to imbue the screen with the excitement of their romantic attraction.

Watching this film made me appreciate just how successful Yuru Camp is at making us care for our camping crew through little more than texting a message of appreciation for one another.

There are three things visual mediums must do to successfully integrate texting into their narrative: First, they need to convince us that these people are good friends. Then, they need to give these characters a reason to be texting one another in the first place, whether it be distance and/or to say or convey something that these characters couldn’t convey in face-to-face conversation. Most importantly, and this is where R#J fell apart while Yuru Camp was effortlessly successful, you have to make texting just as engaging to the audience as spoken dialogue.

To tackle each of these points in order, Yuru Camp has no issue in convincing us that these characters are good friends. Season 1 starts with just one character, Shima Rin or Shimarin, as she goes on a solo camping trip to see Mount Fuji. In the first few minutes of the show, we’re both introduced to key aspects of Shimarin’s character, from her love of camping to her solitary nature, while also being introduced to the show’s slower pace that allows us to appreciate the relaxation that comes from being in nature alongside her. 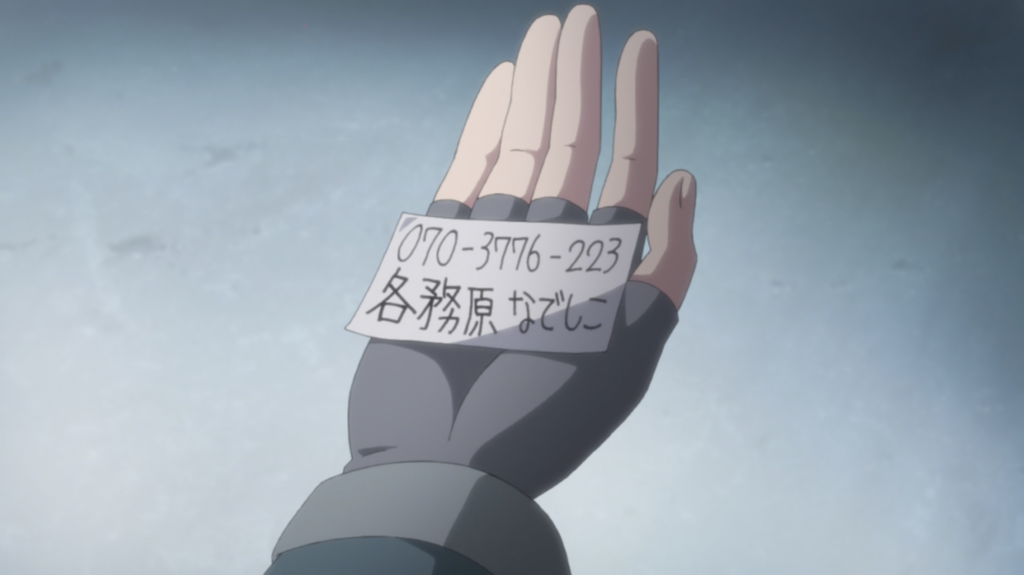 It’s from here that Shimarin meets Kagamihara Nadeshiko, and we see the moment they become friends and Nadeshiko falls in love with the great outdoors. They also exchange phone numbers, giving them a reason to communicate when they’re apart, which is notable since at the time they didn’t know they’d be attending the same school.

Just through this, you give these two characters a reason to be texting one another. Throughout this first season and into the newly airing second season, we witness this friendship grow further, as their group grows to include the members of the Outdoor Activities Club. Adding Saito Ena into the mix, you have a big group chat forming between them.

Texting has far more purpose within Yuru Camp than simply being a contrivance to liven up quieter moments. In season 1, there was an element of distance that slowly closed between Shimarin and the rest of the group as she enjoys her solo camping lifestyle. While those moments alone can now feature dialogue via texting thanks to this, it’s important in convincing her to open up and develop their relationship.

It’s another outlet for the characters to grow closer, one where they can be honest and open, and one through which they can share their passion for camping with one another. Nothing exemplifies this more than the second episode of season 2. 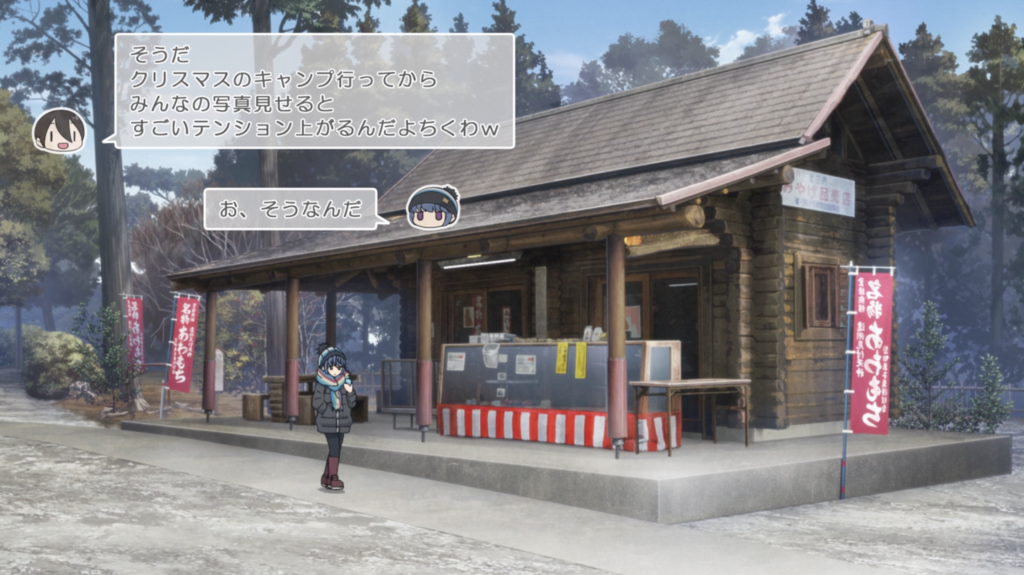 In this episode, Shimarin is solo camping for New Year’s all the way in Shizuoka while the others spend time with family or working. It is the first time they are spending time apart since season 1, when the characters were not as close to one another as they are now. In symbolizing their growing friendship, the group is shown constantly joking over text about how some have time off while the others work, sending Rin advice on places to visit on her journey while they all share New Year’s wishes and take part in shrine visits.

Whether in goofy messages filled with emoji or heartfelt New Year greetings, the series is developing their story by strengthening and reinforcing their bond.

Most importantly, texting in Yuru Camp is always a compliment to the action on the screen, and not a disruption. I mentioned with R#J that texting can feel somewhat sterile when traditionally conveyed on screen, and it’s due to restrictively capturing the mechanical act of texting as opposed to the emotional act itself. Texting is not just the words you send but the feelings you package within them, the thrill of receiving a reply, and the smile that blossoms on your face as you read it, hearing their voice as you do. 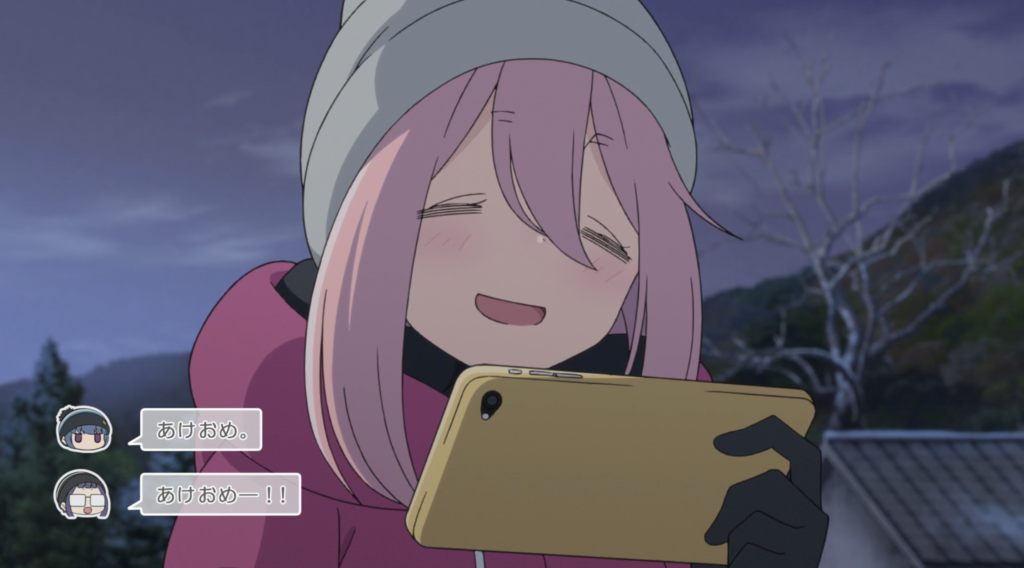 In Yuru Camp, the characters literally say the words they’re texting, and this is what ensures it’s not a disruptive force within the series. Characters rarely stop and stare at a screen. More often than not, they’re traveling as the show replays an off-screen conversation, putting action on the screen while the voice actor vocalizes their texts. Even emoji are represented in how the messages are read aloud.

Never breaking up the flow, Yuru Camp brings us closer to the characters as they speak their mind in texting that isn’t limited by the bounds of the screen, as it’s brought to life to fit a visual medium, and makes texting an extension of the self. Where the written word can feel cold, Yuru Camp makes texting feel as alive as the nature they love to camp in.

Characters are the core of this series and texting defines their friendship. Luckily, texting is represented as a medium as warm as the people sending the messages.