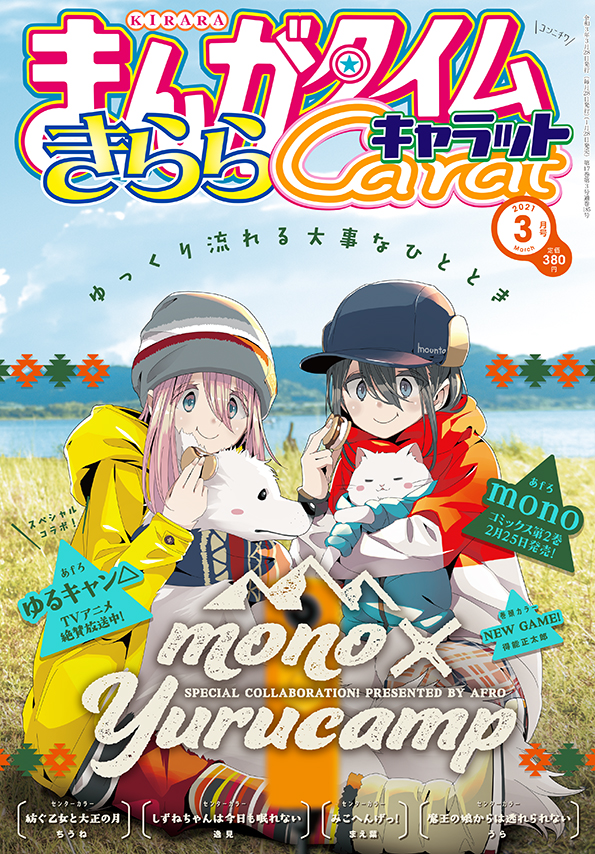 In the world of anime and manga, the success of one series can sometimes lead to others by the same author also getting extra attention. For example, you can see it with Dragon Ball and Dr. Slump, and with Azumanga Daioh! and Yotsuba&! On Thursday, Manga Time Kirara Carat featured a crossover between two Afro manga series: Yuru Camp (Laid-Back Camp) and Mono. Unless you’ve been underneath a rock, you’re probably familiar with the former, but you might not have even heard of the latter.

The anime adaptation of Yuru Camp has been a huge success recently. As Carley Garcia recently noted, it’s cozy and comforting; and its healing story is just what we need in this upside-down Coronavirus world that we find ourselves in. Even without COVID-19, it’s still a good, fun story with a refreshingly simple plot. It’s not your typical schoolgirl anime comedy, and it’s probably just as well that it isn’t.

It’s only natural that manga publisher Houbunsha would want to spread the Yuru Camp love to another series. 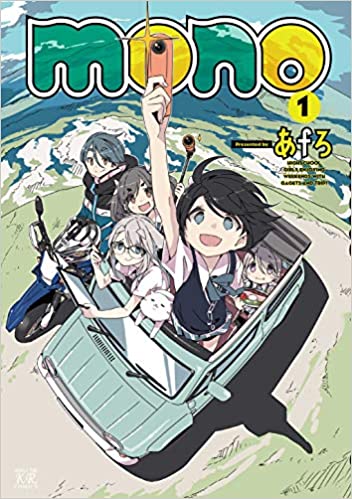 Which brings us to the Mono crossover. The latest cover of Manga Time Kirara Carat features our favorite pink-haired, ditzy camper, Nadeshiko. She’s sharing s’mores with a dark-haired girl who is not Rin. No, she’s not Ena Saito, either. (Is that even Ena’s dog she’s holding? It’s not brown.)

Here’s another weird oddity about the cover: Yuru Camp isn’t even a regular feature of Manga Time Kirara Carat. They were in Manga Time Kirara Forward, until Houbunsha made it the flagship franchise for the COMIC FUZ website/ app.

But nevermind that. The other girl on the cover is Satsuki Amamiya, although it’s hard to tell when she’s wearing that hat. She’s one of the members of the Cine Photo Club, a combination photography and movie club at their high school. (It seems to range from selfie sticks to drone videos.)

Naturally, as a photography club, they head out on trips to places which look like they would fit into Yuru Camp. According to Amazon Japan, Rin and Nadeshiko sometimes make cameos.

The crossover one-shot manga doesn’t involve camping or outdoor trips. According to Natalie, Rin has found a rare mug, and gets into an online auction bidding war with one of the girls from the other series.

From what I’ve seen of Mono (and admittedly, it’s not as much as I would like), it does seem vaguely similar to Yuru Camp. Obviously, the photo angle adds an interesting twist to it. It’s a bit more active, silly and traditional than Yuru Camp, but still good, unique comedy.

Hopefully, this crossover helps Mono get some much-needed attention.