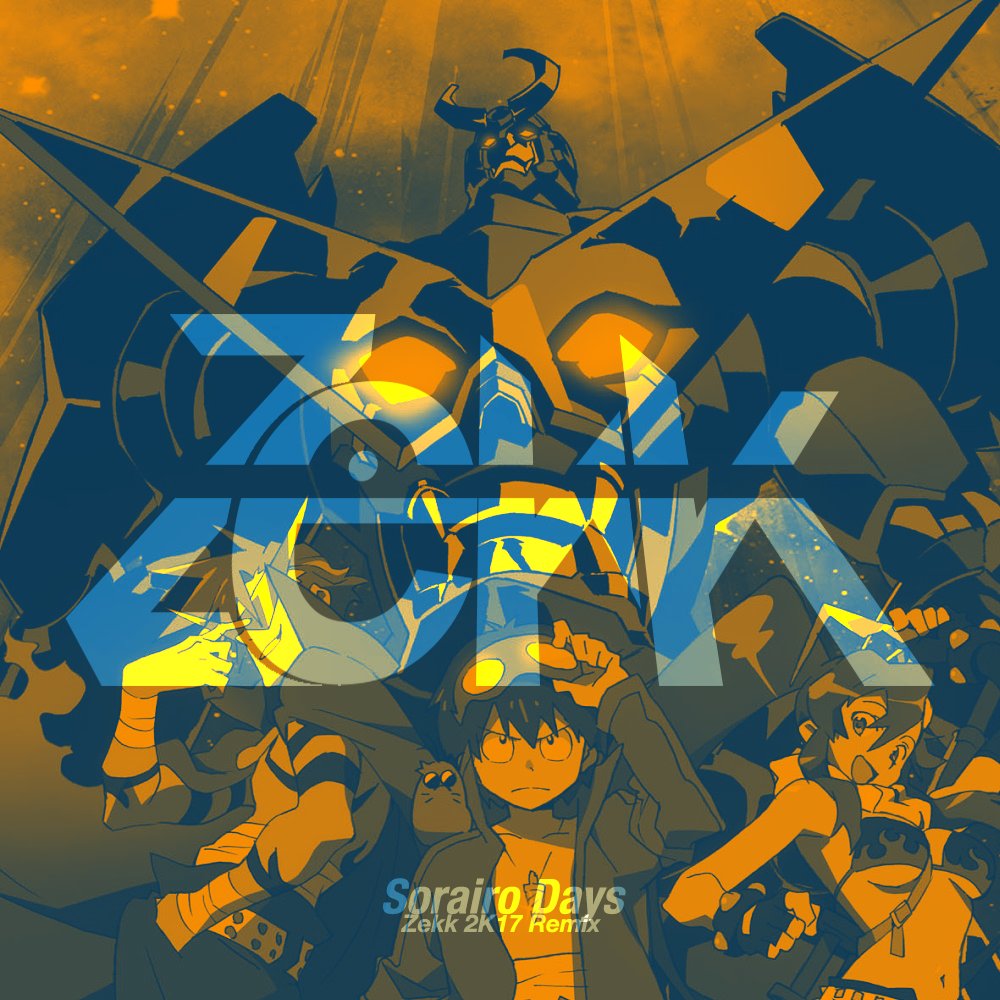 When it comes to doujin (fan-made) remixes of anime classics, there are few people who do a better job than rising-talent Zekk. Back in July 2015, Zekk uploaded a doujin remix of Gurren Lagann OP ‘SoraIro Days’ to SoundCloud. Since then it’s received almost 20,000 plays from fans all over the world, flawlessly blending elements of J-core with Shoko Nakagawa’s powerful lyrics. So when I saw that Zekk had uploaded a 2017 revision of this remix to celebrate the 10th anniversary of Gurren Lagann, I was quick to grab my headphones and take a listen.

Almost instantly I was overwhelmed with an unmistakable feeling of nostalgia — a longing for ten years prior where I found myself captivated in the often chaotic universe Gainax had offered me. What Zekk manages to do within the constraints of 5 minutes 15 seconds is incredible, as a slew of emotions breaks down into the desire to frantically move along to the songs hyper-active pace. This is a remix that could be enjoyed by those who never experienced the original series and long-time fans alike, and that’s part of what makes this track so great.

In light of this, I reached out to Zekk to get a few words about this remix; his comments can be found below:

During my childhood, I was totally captivated in the world of Gurren Lagann. I’ve always been a fan of Studio Gainax’s works, but Gurren Lagann in particular has been a major inspiration. I think it weighed in greatly on the value I hold for my music in general too. I’m so glad that the series has reached it’s 10th anniversary, and because of this I wanted to share the same joy I feel with other fans of the series around the world. That’s why I chose to remix ‘SoraIro Days’, and I really hope you guys enjoy it.

Originally released on April 1, 2007, Tengen Toppa Gurren Lagann stood as the entry-point for an entire generation of anime fans. Taking viewers on a 27 episode whirlwind journey throughout the galaxy, the show was met with critical acclaim upon release both domestically and internationally. It was awarded an ‘Excellence Prize’ at the 2007 Japan Media Arts Festival, and the following year was awarded ‘Best Television Production’ and ‘Best Character Design’ at the Tokyo Anime Awards.

For more of Zekk’s works, you can find them on both SoundCloud and Twitter.

Otaku no Video: The 90’s Toast to (and Roast of) Otakudom

What Makes ‘A Cruel Angel’s Thesis’ From Neon Genesis Evangelion So Memorable?

Tengen Toppa Gurren Lagann Is Not Your Average Mecha Anime