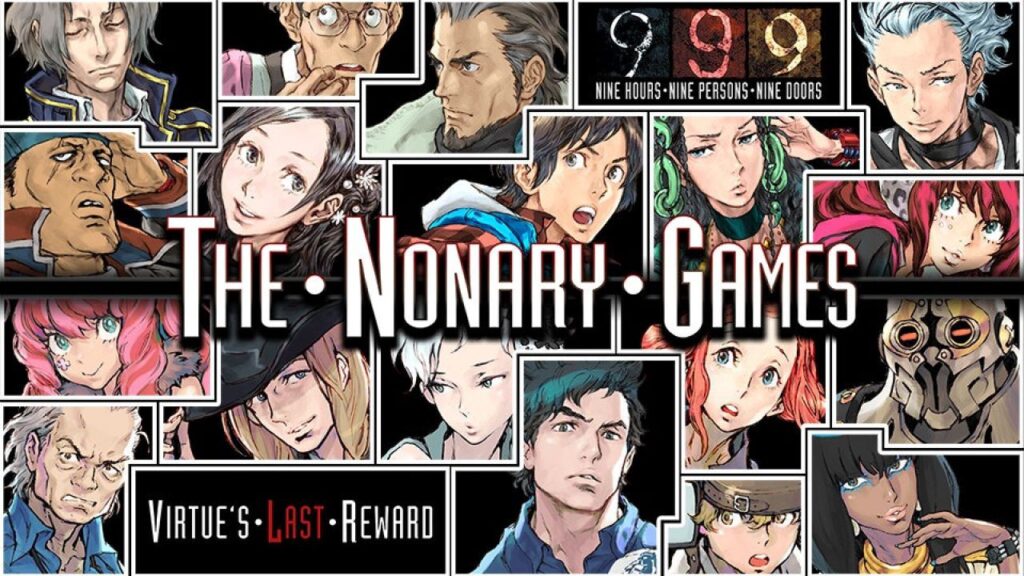 What is the Zero Escape Trilogy?

The Zero Escape games are a Trilogy of Mystery horror puzzle visual novel games created by Spike Chunsoft and Chime, starting with 999 – 9 Persons, 9 Doors, 9 Hours in 2009 for the Nintendo DS.

The sequels, Virtue’s Last Reward (2012) and Zero Time Dilemma (2016) were created for the 3DS and Playstation Vita, incorporating new elements that use the 3DS has capabilities to the absolute best, and came with fully voice acted dialogue and 3D cutscenes. The trilogy was eventually released on Steam with updated voice acting and a remastered soundtrack.

Each game in the Zero Escape series starts off in mostly the same way – everyone is kidnapped either during some activity or the middle of the night, and they wake up locked in a room, sometimes with a partner, with a big, clunky bracelet on their hand that has a number displayed on the screen.

Their captor, a mysterious masked entity going by the name of Zero, forces them to follow a set of rules in order to successfully escape the situation alive. While all three games have a true ending that provides a way for everyone to make it out alive, part of the challenge is making sure you make it out alive, let alone someone else.

Difficult, morally ambiguous binary choices are a staple of the Zero Escape trilogy. Sometimes, often in the sequels, the choices are timed in high stakes conditions, sure to raise the blood pressure of the players and make them question their life decisions up to that point. A sign of a good game, in my opinion, because if you don’t walk away from a game wondering whether you’ve made the right decision, are you even living?

As it’s a horror franchise, there are occasional violent, explicit deaths, and No One Is Safe. And there are multiple timelines where you could end up on the business end of an axe or poisoned. If you’re lucky. Dismemberment and total incineration are among many fun ways to die or see your friends (or enemies) die in the Zero Escape Trilogy.

The games have two main sections, novel sections that advance the story, and escape sections where you solve puzzles to get out of the room. The games are very dialogue-heavy, and often references math, science, philosophy, psychology and sociology and are often incorporating these elements to solve puzzles, and relies on the player’s knowledge and recollection of certain elements in order to progress. (Though peeking at a walkthrough never hurt anybody, especially due to some wonky translation errors every now and again.)

It’s a series that very much improves with every game, making the transition from Nintendo DS to 3DS nicely with new game elements, including set teams with a leader and a points-based elimination system. All the Zero Escape games come with hints in case the puzzles are too difficult to solve, and some allow you to change the difficulty level from normal to easy. 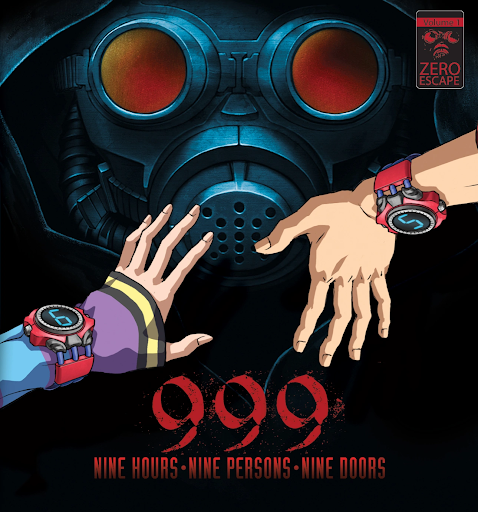 The first game in the series, 999 was released in 2009 and mostly 2D animated, with 2D Sprites and no voices, though the updated version in 2017 included voice acting.

After being kidnapped in the middle of the night, college student Junpei awakens in what appears to be a boarding room on a ship, with a clunky electronic bracelet strapped to his wrist displaying the number five on the screen. In the first puzzle of the game, the player learns the basic rules of the nonary game while trying to escape a room rapidly filling with water.

As you can probably guess by the title, there are nine people playing the game and the objective of the game is to get to the door with a number 9 on it, in under 9 hours.

Eight others soon join Junpei, each with similar bracelets attached to their wrists with numbers one through nine. The players must then navigate what appears to be a replica of the Titanic’s interior, and are presented with three doors that they must choose to go through.

One of the first choices the players given is who to team up with to go through what door depending on their digital root, which is the sum all of the numbers added up down to 1 digit ( for example, 1 + 4 + 5 equals 10, which then reduces to 1 + 0, which is 1, so they would go through the one door.)

It doesn’t matter which set of characters you start your journey with, eventually you will learn their mysterious, colorful backstories, including a sister-brother team named Clover and Snake, belly dancing woman named Lotus who’s also an expert hacker, and most importantly, Akane, Junpei’s childhood friend who mysteriously disappeared 9 years ago.

Eventually, everyone slowly uncovers the mystery of why they were all gathered there: they have some connection to a nonary game that was played 9 years prior – an experiment having to do with the morphogenetic field – an intangible method of transmitting information beyond time and space.

Virtue’s Last Reward was released in 2012, and was the first of the trilogy to originally have fully voice acted cutscenes and dialogue, as well as 3D animation.

Set 10 years after the events of 999 in the year 2028, Virtue’s Last Reward starts off similarly to its predecessor, 999, however this time you wake up locked in a room as Sigma, a man locked in a room with a girl in her early twenties named Phi.

Once again, nine people – with some returning from the first game – with some kind of connection to each other are forced to play some version of the nonary game by Zero (this time taking the form of a cuddly, yet unsettling virtual rabbit named Zero Jr.), only this time it’s the Ambidex Game, a version of the game meant based on the Prisoner’s Dilemma, in which you choose to Ally or Betray the other team members. 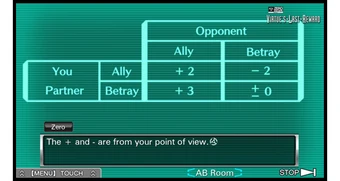 Bracelets display the number of points they have at any given moment, rather than pre-assigned numbers. The first players to get to 9 are allowed to go free, forever trapping the others to wait out their deaths in the bunker. If a player’s bracelet gets to zero, they are killed via, again, poison administered by the bracelet.

The bracelets also change color after every round of the Ambidex game, creating new alliances in groups of 3 that can only access doors of a certain color, rather than a certain number. Solving puzzles yields passwords to a safe that gives them either important information or the key to exit the room.

Virtue’s Last Reward also introduced a number of major improvements to the game mechanics. A backlog of dialogue was made available for the player to review, as well as a visual flowchart that allows the player to jump directly to new sections without having to play through the dialogue and puzzles from the beginning.

As excellent as 999 was, when you got a bad ending, you had to play the game from the very beginning – no save points to speak of. And without a flowchart, it was difficult to keep track of where you had already been in the storyline and to get to the true ending.

Especially because getting to that ending was heavily dependent on whether or not you made the right dialogue choice when speaking with a character in a deceptively mundane exchange that led to unveiling of crucial information needed to progress. (No spoilers, but let’s just say if you accidentally insult this character, you’re headed for a world of pain, probably by that bloody axe – again).

Thankfully, the updated version of 999 fixes this issue, among others. 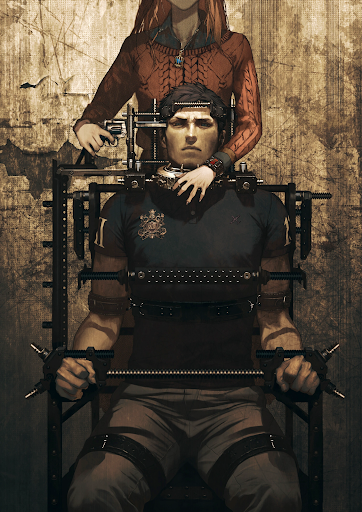 All of the events of the previous games come to a head in this final game of the trilogy, and we get answers to mysteries introduced from the beginning, with the usual amount of character reveals and timeline shenanigans.

You know the story by now – nine people are kidnapped by Zero, taken to some kind of facility,  and split into teams of three. This time, however, they’re forced to play what is probably the deadliest and most brutal version of the Nonary Game yet: The Decision game – the results of which are just about as final as the name implies.

In a high-octane version of the Prisoner’s Dilemma, the player, assigned the leader of the team, can choose practically right off the bat whether or not to immediately kill any of the other two teams after completing the first puzzle. The game also features high-stakes timed choices, such as playing a timed Russian Roulette game that could possibly save or doom one or both characters in a team.

The gameplay differs a little in that it doesn’t matter where you start in the story, because the gameplay operates in 90-minute fragments, after which the players are injected with an amnesiac agent that causes them to lose their memory of the last 90 minutes before knocking them out.

The cutscenes are also a little different, taking a more cinematic approach rather than just showing talking sprites on a screen with the occasional cutaway or scene. Some puzzles allow the player to input an answer rather than choosing from a set, and it largely depends on information learned in other segments of the game.

The Zero Escape Trilogy is still very popular and in high demand, as is available in a bundle on Steam, as well as for the PlayStation Vita. The original cartridge games are still available for the 3DS as well.