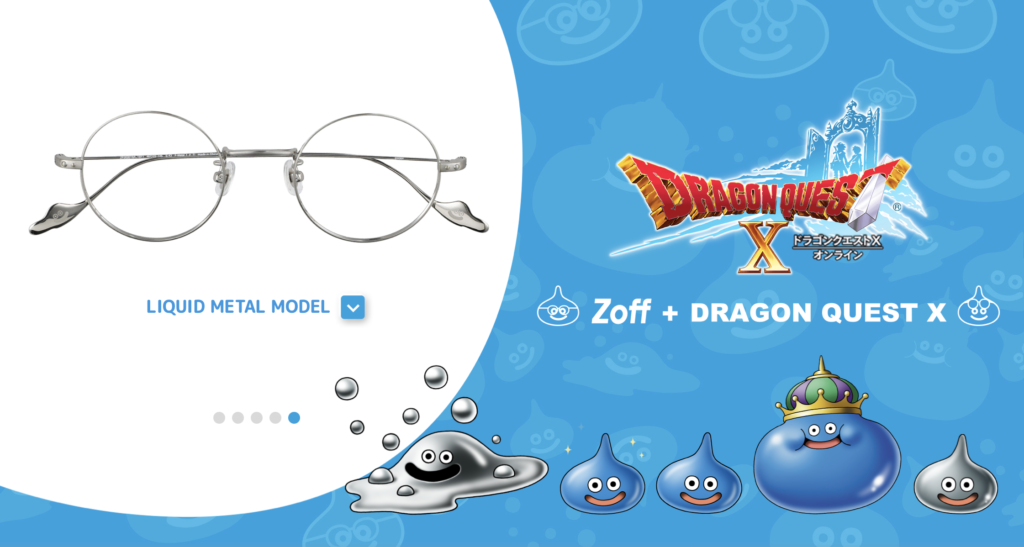 Japanese eyewear chain Zoff has been the home to a number of crossover eyewear over the years, most recently having collaborations with Final Fantasy VII Remake. Today, the eyewear giant announced that they’re going to bat with Square Enix again with their mega-popular title Dragon Quest X. Similar to the previous line with Final Fantasy VII Remake, the Dragon Quest X tie-up will feature several styles that fans of the series can choose from, each with their own design quirks and varying styles.

The Zoff Dragon Quest X series of eyewear come in four different styles of specs that fans can choose from: PREMIUM SLIME MODEL, the SLIME SERIES, the METAL SLIME SERIES, and the Zoff PC line of glasses. The one that stands out the most here is obviously the PREMIUM SLIME MODEL. The rim of the glasses where the lenses will be inserted is shaped after the iconic Slime character from the Dragon Quest series of games. The frame itself is black with the Slime blue color at the top of the frame. The sunglasses attachment that is included has the remaining shape of the Slime character at the top.

As I am getting older, and I also have to wear glasses, the design that stood out to me the most was the standard Slime series. It features a black frame with the shape of the Slime character to each side of the lenses, as well as on the arms that will go over your ears.

The Zoff Dragon Quest X series of glasses is available online through the Zoff website or in-store at the Harajuku Zoff store, the Osaka Gran Front Zoff Store, or the Nagoya Parco Zoff Store.