Is the Zombie Land Saga Collaboration Café Worth Your Time?

When all of the staff here at Otaquest were asked to pick out our highlights of 2018 in Japanese media and culture, I picked as one of my choices an anime that ended up being my favourite show to air in 2018: Zombie Land Saga. Alongside having great characters and music and being pretty damn funny, it’s a show that’s managed to stick in my mind long after it finished airing. While we may still be waiting for a season 2 announcement to arrive, promotion for the show has continued in Japan. Much of this has taken the form of new merchandise lines, but another, more exciting promotion for the anime takes the form of a special, limited-time Zombie Land Saga café in both Ikebukuro in Tokyo as well as in Osaka.

I luckily heard about this as soon as the promotion began. Of course, as soon as I knew there was a special café on my doorstep in celebration of my favorite anime of the last 12 months I knew I needed to go and visit it, so I found a few friends I could drag along with me and set a date for us to all meet and visit it together. They were also fans of the anime and came along willingly, I swear!

Before long, the date arrived and it was time to attend our slot. Before going into the café itself it’s probably best to explain the standard procedure around themed cafés such as this one. A reservation in advance is a requirement, for a start. The popularity of the property will determine how far in advance you need to book, but you will be turned away without a reservation. The Zombie Land Saga café does have some spaces left but not necessarily at peak times. This booking will guarantee you entry for a single timeslot within which you need to arrive, order food, eat, pay and leave. Here, there were 80-minute timeslots, but with food order, last calls occurring after about 15 minutes, don’t turn up late. Usually, a café will have a minimum order that you’re required to follow in order to sit (you needed to order a main course and dessert here) and many will also have a non-refundable seat deposit you need to pay when making a reservation (here it was 650yen before tax). They aren’t necessarily cheap places to visit.

Anyhow, as our timeslot arrived we found an unassuming building off the beaten track and want down a small set of stairs adorned either side by posters displaying special artwork of the members of Franchouchou as waitresses in order to get to the café itself. While you do have to pay just to reserve your seat, at least you won’t come away empty handed. Buying entry into the café also means you receive a randomly-chosen ’Staff Pass’ sticker for one of the members, a random drinks coaster and a paper table mat with either the chibi or standard designs of the characters in waitress attire. They actually expect that customers won’t want to use these drinks coasters and paper mats, as official goods, won’t want to be used and actually expressed shock when my friend suggested that they would use it. Surrounding us in this small café space, music from the show was beaming through the speakers and various TVs were promoting the home video release of the show as well as showing clips of memorable moments. While we couldn’t see it from our own seats due to how the café was structured, just around the corner were more seats as well as a small shop with special collaborative goods.

One complaint I have with this collaborative is how little food was on offer. The menu offered you three options of main and dessert you could choose from, which isn’t all that much to choose from, really. One of my friends ended up ordering the ‘DEAD OR RAP!!!’ spicy curry while my other friend as well as myself went with the Tokkou Dance udon. Along with that they both chose the ‘Yomigaere’ glass cake while I went with the ‘Flag o Hatame Kaseru’ parfait and ice lolly. The thing is, each of these choices meant we ordered the majority of the menu between us, only skipping one option each since only 3 meals were on offer for each course. It becomes an even weirder choice when you consider the official art for the cafe shows our characters carrying spaghetti and omurice, despite neither being on offer at the café.

You did have more choice when it came to drinks, with a float drink being offered representative of each member. I went with Lily’s drink, personally, and though it was nice, they used A LOT of food coloring on the icing in order to create the bright blue color they used to represent her hair. I was still a little bit blue in my mouth even after eating and we had left the venue! 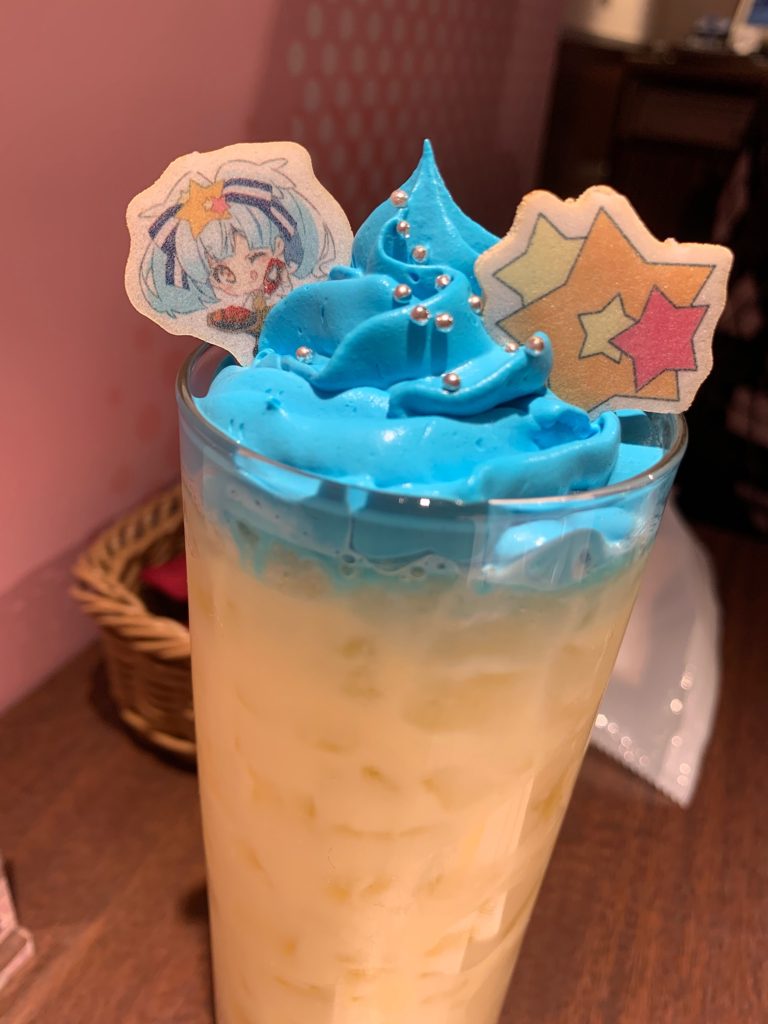 Perhaps it is harsh to label this as an issue with the café, but it’s also a shame that, given the concept of the anime about an idol group of zombies formed to revitalize the Saga area, that nothing in the café was done to tie it into the area it came from. There’s no indication in the café itself or on its website that the food was sourced from Saga or from Saga-based companies, which isn’t necessarily a requirement but seems like a little bit of a shame when you consider how closely tied the show is to the area. With the café also only being hosted here in Ikebukuro or in Osaka, it also means that those who live in that area can’t experience it for themselves. It feels like a shame to not have some tie into the area the series is based on here. 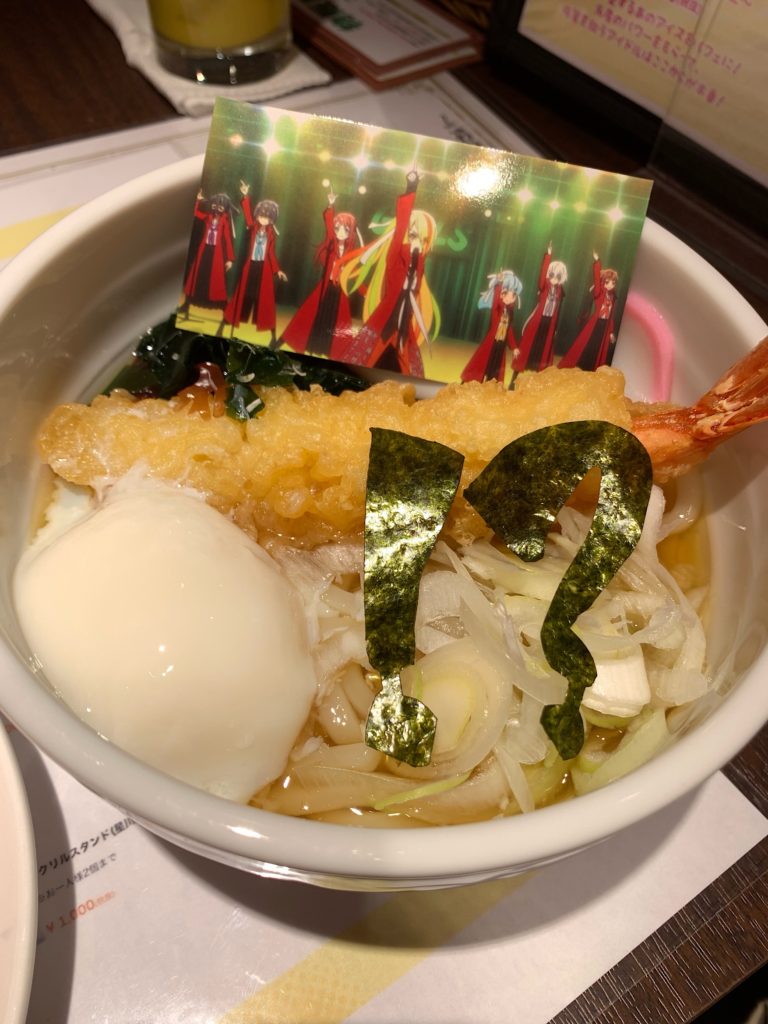 The food was still nice, though. The udon I ate was rather filling, with tasty noodles and broth, vegetables, egg, and tempura. The rice balls were a nice bonus in that regard as I’d have been rather content with just the udon itself with how much was included. It was a rather nice addition, considering its use as a running joke throughout the episode the meal is based on, that an exclamation point and question mark were placed on top of the meal having been made out of seaweed. I heard glowing words of praise for the spicy curry as well, though they wouldn’t have called it spicy. The dessert was rather nice too, though I felt rather bad with how long it took me to guzzle through it considering I was still on the ice lolly as they were finished scraping the glass from their cake. 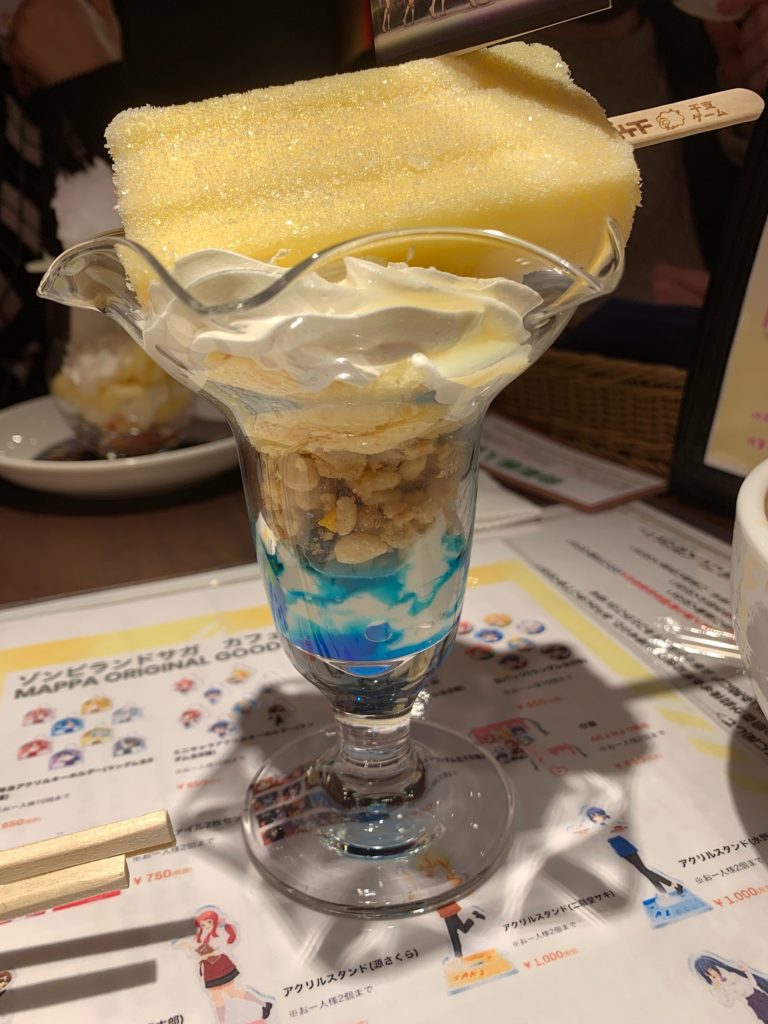 It perhaps didn’t help that they had started their desserts while I was browsing the goods store since they arrived while I was gone. To avoid everyone piling in at once, upon your arrival you were given a 30-minute timeslot ticket within which you can enter the store and purchase any goods you would like to buy. Thing is, when I went during our timeslot, much of the merchandise appeared to have sold out. In theory, you had multiple random pin badge blind bags, blind random bromides and acrylic keychains alongside acrylic stands for each character, a coin purse and clear files, all exclusive to the café (though they were also selling a non-exclusive 2019 calendar). In reality, the coin purse, half of the acrylic stands, the blind bromides and all of one of the two blind badge bags had completely sold out, leaving the store rather barren. I was luckily able to buy myself a Lily acrylic stand, but the Saki one I had also wanted was sold out, although I did luckily get a chibi keychain of her in the blind bags. I only realized in the process of writing this piece that you could apply to get a merchandise ticket if something you wanted was sold out, allowing you to return at a later date if the item was in stock. There was no indication of this as far as I was aware and I wasn’t informed of this when I asked about item stock, and while it is possible these items would not be restocked before the café’s end, it would at least have been nice to have these options or this reality stated to me.

Near the beginning of this piece, I noted that you need to be aware that these places aren’t cheap, and that has to be reiterated here. On top of having to pay 650yen just to get in, the food, while nice, is more than you would pay for an equivalent meal at a non-themed restaurant. For example, I have had bigger bowls of udon than the one I had at this cafe for under 1000yen, yet this bowl cost 1580yen before tax, with other parts of the meal having similar premiums. I don’t view that as a negative, necessarily, since you pay for the experience of the themed café within that premium price, but it should be noted all the same. Instead, you need to work out whether it’s worth the premium, and overall I think it was. Whether you would enjoy it yourself, however, depends on how much you like the show, and I wouldn’t recommend it to someone who wasn’t a more dedicated fan of the property, since the food, while nice, is overpriced since you’re paying for the experience as well.

If you happen to be in Tokyo right now, the café will remain open until Sunday, April 21st, while it will remain open until the 23rd in Osaka. If you want to attend this Zombie Land Saga Café, you will need to make a reservation over on their official website. If you’re a fan of the series and can handle the premium pricing, I’d say it would be worth your while.